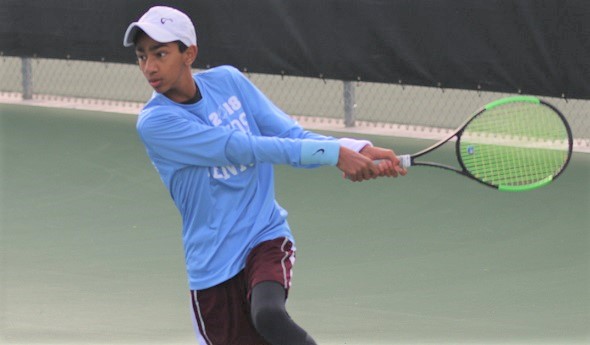 The format for this weekend’s Lower Peninsula Boys Tennis Finals will be different – but many of the teams we’re used to seeing raise championship trophies could be doing so again by Friday evening.

Due to COVID-19 precautions, this season’s MHSAA Tournament was switched to a head-to-head team format that will see a total of 64 teams spread out Thursday across four divisions and 16 sites to begin the conclusion of this season’s title march.

First-round and Quarterfinal matches are Thursday, with the semifinalists then converging on four sites for the final two rounds Friday. Action both days begins at 11 a.m., with Finals on Friday expected to begin by 4 p.m.

Visit the MHSAA.com “Tournament Home” for brackets and tournament information for all four divisions, and see below for contenders to watch in each.

Okemos: The Chiefs, after winning back-to-back Division 2 championships in 2017 and 2018, came in fourth last season in Division 1. This fall they are 25-0 with wins over nine of the other 15 teams playing in this event including the rest of the top eight. Druv Talluri and Siddharth Nagisetty were the No. 1 doubles champion pair last season, but have split up – Talluri and Shrey Patel at No. 1 and Nagisetty and Ethan Portnoy at No. 2 are both undefeated together this fall. Top singles player Josh Portnoy is 21-1, No. 2 Rohan Shah is 22-1, No. 3 Colson Wells is 16-1 and No. 4 George Fan is 19-0 in singles play.

Huron: The River Rats are 16-2, their only losses to Okemos and Ann Arbor Greenhills. Doubles played a big part in last year’s shared team title, and Nick Grosh and TJ Bai are 13-2 partnered again, this time at No. 1 after winning the No. 2 doubles flight in 2019. Vincent Tremonti was part of the No. 4 doubles champion last season and is playing No. 2 with Aidan Storey; together they are 14-2.

Pioneer: The Pioneers are 18-3-1, with losses to Okemos one and Huron twice, and a tie against Troy. Juniors Isaac Herrenkohl (26-3) and Noah Vogel (25-4) were the flight champions at Nos. 3 and 4 singles, respectively, last season and have both moved up one flight. No. 1 singles Stanley Rhodes and No. 4 Corin Tang both have at least 21 wins as well. Evan Roopas was part of last year’s No. 4 doubles champ and Aditya Abbaraju was part of the No. 2 runner-up, and together they are 21-4 and playing No. 2 this weekend.

Other notes: Troy Athens senior Gabe Brown is 22-0 at No. 1 singles. … Utica Eisenhower should provide an intriguing challenge to Pioneer in singles with Ben Saunders (28-6) and Luke Suchyta (27-7) at Nos. 3 and 4. … Rockford’s Sam Danner has put together a 24-5 season playing Nos. 3 and 4 singles.

Forest Hills Northern: The 26-0 Huskies regained a Finals championship last season for the first time since 1998, and are favored to repeat. Three of six players who were part of doubles flight titles in 2019 return this weekend; Justin Lee and Cole Rynbrandt are 29-0 together and playing No. 1 after winning No. 2 last year, and Jack Sparhawk is 27-2 with No. 2 partner Aaryan Singh after Sparhawk was part of the No. 3 champ last fall. All four singles players have at least 20 wins as well: junior Owen Goodrich is the reigning runner-up at No. 4 and 27-1 at that flight, while sophomore Ryan Lee (No. 3) is 26-2, senior Sid Varma (No. 2) is 25-3 and senior Peter Renucci (No. 1) is 20-5.

Mattawan: The Wildcats enter 18-3 and seeking their first top-two Finals finish, with losses this season only to Forest Hills Northern, Forest Hills Central and Division 1 ranked Hudsonville. Mattawan tied for seventh a year ago and boasts a powerful singles lineup led by senior Nathaniel Webster, who won No. 1 singles, was runner-up in 2018 and is 18-0 this fall. Junior Luke Hodgman (21-2) and freshman Jacob Hodgman (23-0) fill in strongly at Nos. 2 and 3, respectively.

Forest Hills Central: The Rangers have lost only to Northern twice, Groves and Greenhills, and the first defeat to Northern was only 5-3. Forest Hills Central was sixth last season and also tied Dow twice and Portage Central this fall. Sophomore Sammy Yin (21-5), senior Jeremy James (25-1) and sophomore Chris Shang (21-6) are another impressive singles group.

Other notes: Midland Dow would see the Rangers again in the quarterfinals if both win their first match. Dow also tied Groves. Freshman Aaron Li (23-3) at No. 4 singles has been among standouts. … South Lyon East has a tough draw, but senior Adi Chottera should be a nice challenge at No. 2 singles entering the weekend at 23-2. … Roosevelt is in a similar spot, but junior Sammy Oswald will have a chance to build another impressive win into his 22-2 record mostly at No. 4 singles.

Greenhills: The reigning champion Gryphons are 13-6, the defeats either to Division 1 teams, or Cranbrook twice decided by tie-breakers (Greenhills also defeated Cranbrook once on a tie-breaker). Junior Mert Oral (21-1) and sophomore Rishi Verma (22-0) are the reigning champions at No. 1 and No. 3 singles, respectively, while Joey Formicola and Thomas Zeng are 15-8 at No. 1 doubles this fall after being part of flight champs last year at Nos. 2 and 4, respectively. Sophomore Chakor Rajendra also is 22-0, playing No. 2 singles.

Cranbrook Kingswood: The Cranes tied for second last season after winning four straight Division 3 titles, and they’re back in the mix with a freshman and two sophomores making up the majority of the singles lineup. Sophomore Dimitri Moriarty is 16-3 at No. 2 and freshman Devyn Gans is 17-2 at No. 3 – while senior Geoffrey Qin is undefeated at No. 4.

Country Day: Last year’s tie was Country Day’s fifth straight runner-up finish after it opened the last decade with four Division 3 championships. Boasting ties this season against Cranbrook and Division 1 Bloomfield Hills, the Yellowjackets are no doubt going to be back in the chase this weekend. Clay Hartje and Aidan Khaghany were No. 3 doubles champs last season and are 10-3 together at No. 2.

Other notes: St. Clair took Division 2 Groves and Seaholm both to 5-3 in losses, and three of four singles players who were Finals runners-up in 2019 are back in the lineup. Junior Derek Distelrath is back at No. 1 and 25-3, while sophomore Ian Pinnoo has moved from No. 4 to No. 2 and is 23-5. Sophomore Michael Mascarin was No. 3 runner-up last season and is 14-2 at No. 2 doubles with Joey Fajardo. … Chelsea’s two head-to-head losses were to Division 1 contenders Huron and Pioneer, and all of its singles starters – junior Hunter Napieralski, sophomore Peter Mourad, junior Lucas Hopkins and freshman Mason Strach – have at least 30 wins. … Allegan shared the Division 4 championship a year ago and enters 14-2-3. Sophomore Eli Festerling is 21-3 mostly at No. 2 singles after winning the Division 4 title at No. 4 in 2019. ... Sophomore Sreejay Ramakrishnan is having an excellent season at No. 1 singles for Forest Hills Eastern, posting a 25-4 record.

No. 1 Traverse City St. Francis vs. No. 16 Niles Brandywine
No. 2 Kalamazoo Hackett Catholic Prep vs. No. 15 Grosse Ile
No. 3 Grosse Pointe Woods University Liggett vs. No. 14 Chesaning
No. 4 Hudsonville Unity Christian vs. No. 13 Frankenmuth
No. 5 Grand Rapids NorthPointe Christian vs. No. 12 Berrien Springs
No. 6 Grand Rapids Catholic Central vs. No. 11 Lansing Catholic
No. 7 Jackson Lumen Christi vs. No. 10 Big Rapids
No. 8 Williamston vs. No. 9 Pontiac Notre Dame Prep

St. Francis: The Gladiators are seeking their first MHSAA Finals championship in this sport, but finished runner-up in 2018 and tied for fourth last season. They’re tested against the best, with most of their competition against larger schools and also a 4-4 tie with Hackett. Junior Ben Schmude is back as half of the reigning No. 1 doubles champion and 29-3 with new partner Cody Richards – last year’s No. 3 singles champion as a sophomore. Senior Charlie Schmude leads singles at 30-9 at No. 1, with three freshmen filling out the lineup led by Tristan Bonanni (30-4) at No. 2.

Hackett: The Irish are coming off their first championship since 2005 and sit 11-0-2 this fall with the ties to St. Francis and Portage Central. Senior Jack Ford was the runner-up at No. 2 singles last season and is 15-1 back at that flight, while sophomore Tommy Kling is 15-1 at No. 3 and sophomore Niklas Johansson is 14-2 at No. 4. Johansson was part of the No. 4 doubles runner-up last season with Jack Gordon, now 12-3 at No. 3 with Marcus Alcaraz. Senior Anthony Toweson was part of the No. 2 doubles runner-up in 2019, and he’s 11-3 at No. 2 with new partner Sam Magnell.

Liggett: The Knights missed causing a three-way tie for the championship last year by a point, and they’re seeking to regain the top spot for the first time since winning back-to-back in 2016 and 2017. They finished just a point behind St. Francis at a quad in August and went on to face mostly larger opponents. Senior William Cooksey is the three-time reigning champ at No. 1 singles and 19-1 this fall. Sophomore Gerry Sherer was the runner-up last season at No. 4 singles and he’s 20-7 this fall playing at that flight and 10 matches at No. 2.

Other notes: Unity Christian’s only head-to-head loss this season was to Division 3 Holland Christian, and NorthPointe’s only head-to-head defeats were to Division 1 Hudsonville, and Hackett. NorthPointe’s Chase Berends and Sam Bradley were the No. 3 doubles champion last season and are 21-2 at No. 1 this fall … Grand Rapids Catholic Central also is intriguing with power in singles including senior Andrew Frost (23-6) at No. 1 and junior Ben English (23-6) at No. 3. English was part of last season’s No. 4 doubles champion.