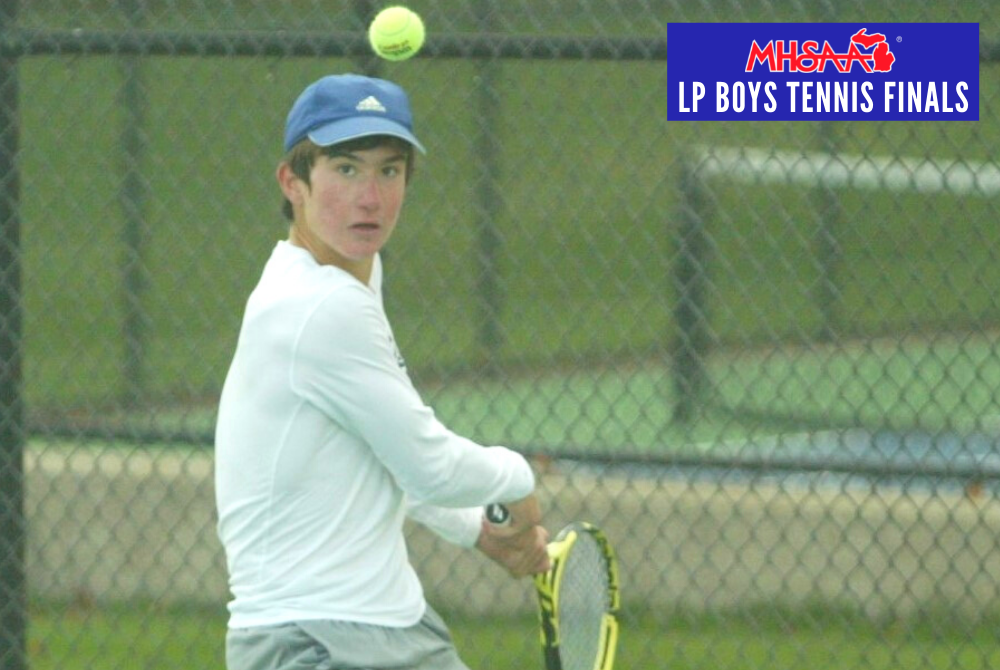 What’s old is new again at the Lower Peninsula Boys Tennis Finals, but with plenty of what we’re used to expected this weekend as well.

After a format switch to a head-to-head team championship tournament last year due to COVID-19 precautions, the traditional format has returned with team and individual qualifiers at four sites – Division 1 playing on Thursday and Friday and the other three divisions Friday and Saturday.

Many of the usual favorites are expected to push for championships again. Okemos is the top-ranked team in Division 2 after winning Division 1 a year ago, while Bloomfield Hills Cranbrook Kingswood is top-ranked and the reigning champion in Division 3. A number of other recent champs should be in the mixes again as well.

See below for a look at many of those contenders, and check out the MHSAA Website for brackets and more (Final rounds will be played at sites listed first below):

Bloomfield Hills: The Black Hawks are seeded at seven flights with the top seeds at all four singles – Noah Roslin at No. 1, Daniel Stojanov at No. 2, Pierce Shaya at No. 3 and Aaron Rose at No. 4. Roslin advanced to the No. 1 semifinals last season and is the lone senior in the starting lineup – he has wins over the second and third seeds at his flight this season. Stojanov is one of only three juniors in the starting lineup, so Bloomfield HIlls could make a run at team championships over at least the next two seasons.

Troy: The Colts have found the same success as the Black Hawks but thanks to different strengths, with seven seniors and a junior anchoring the lineup and the top seeds at all four doubles flights – Andrew Wang and Nikhil Tatineni at No. 1, Srihari Ananthalwan and Aryan Gupta at No. 2, Pranav Bellad and Zach Saad at No. 3 and Dhruv Gupta and Rushil Kagithala at No. 4. Three singles flights also are seeded, including Haresh Anand second at No. 4 singles.

Novi: The Wildcats also have seven seeded flights, led by second seeds Cole Anderson at No. 2 singles and Rohit Saripelle and Nikhil Daniel at No. 4 doubles. Novi had four flight champions at its strong Regional and will be making a run at its first team Finals title since sharing with Bloomfield Hills in 2015.

Dimitri Moriarty, Bloomfield Hills Brother Rice: After a solid season at No. 2 singles last fall, Moriarty moved up to No. 1 and is 16-4 and seeded second as a junior.

Anthony Van Oyen, Ann Arbor Skyline: Van Oyen, also a junior, made the No. 1 singles bracket in 2020 as the eighth seed and returns to the Finals this weekend third at No. 1 singles.

Okemos: Despite almost an entirely new lineup from last year’s team championship run, Okemos has five flights seeded and all four singles seeded first or second. Ethan Portnoy is seeded second at No. 1 singles after playing No. 2 doubles last season as a freshman, and junior George Fan is the top seed at No. 2 singles and played No. 4 a year ago. Hannah Letzer is the second seed at No. 3, and Suchir Nagisetty is the top seed at No. 4.

Mattawan: The Wildcats are chasing a historic finish with a strong singles lineup featuring three of the team’s four seeded flights. Luke Hodgman at No. 2 and Andrew Williams at No. 4 singles are both third seeded, as is the No. 2 doubles pair of Garrett Cheng and Brady Sullivan.

Detroit U-D Jesuit: Doubles drove the team’s runner-up finish in 2019, and that could be the scenario again this weekend. Five seeded flights total are expected to lead the Cubs into contention, with Sam Owens and Stephen Cibulas the top-seeded pair at No. 4 doubles and Alex Kuplicki and Luke Padilla the second seed at No. 2.

Sammy Yin, Grand Rapids Forest Hills Central: The junior singles standout is seeded first at No. 1 after reaching the semifinals last season, and he has wins over the next two seeded players at his flight.

Connor Stafford, Grosse Pointe South: Stafford, also a junior, carries the third seed at No. 1 into this weekend and has played the top flight all three seasons.

These three programs have taken turns winning the Division 3 title going back to 2008, with Greenhills entering the mix in 2019 after dominating Division 4 previously. Cranbrook Kingswood won last season’s Division 3 team title, with Greenhills the runner-up, and Greenhills was the 2019 champion with Cranbrook and Country Day tying for second place.

Bloomfield Hills Cranbrook Kingswood: The Cranes moved into the top spot in the rankings this week after winning a Regional that included No. 6 St. Clair. All eight flights are seeded, including one top seed and five second seeds. No. 3 doubles pair Ryan Michaels and Andrew Fink earned that top spot, while Owen DeMuth at No. 1 singles, Patrick Tiwari at No. 3 and Caden Che at No. 4 are all second-seeded as are No. 2 doubles Jacob Coburn and Sebs Taubman and No. 4 Aryan Tiwari and Praneel Pillarisetty. DeMuth was the No. 1 singles runner-up last season.

Detroit Country Day: The Yellowjackets have finished Finals runners-up five of the last six seasons since concluding a four-year championship run in 2014, and they were Regional runners-up to Greenhills by two points last week. All eight flights are seeded as well, with doubles particularly powerful. No. 2 pair Aiden Khaghany and Clay Hartje and No. 4 Ramzi Nassif and Aayush Dagar are top seeds, and No. 1 Alex Pollak and Petros Kalabat and No. 3 Nick Kalkanis and Charlie Holman are second seeds. Hartje and Khaghany won No. 3 doubles in 2019.

Ann Arbor Greenhills: The Gryphons went from No. 1 to No. 3 in the team rankings despite the Regional win mentioned above, but they’ll no doubt remain in this weekend’s mix with seven seeded flights – including the top seeds at all four singles. Senior Mert Oral is the two-time reigning champion at No. 1 singles, with Rishi Verma slotted No. 2, Chakor Rajendra at No. 3 and Kabir Rajendra at No. 4. Verma won at No. 3 and Chakhor Rajendra at No. 4 in 2019.

Simon Volkema, Grand Rapids Christian: The Eagles senior is the third seed at No. 1 singles after making the semifinals at the top flight last season.

Derek Distelrath, St. Clair: Also a senior, Distelrath is the fourth seed at No. 1 after also making the semifinals in 2020. He was the No. 1 singles runner-up in 2019.

Tanner Warners & Dream Kwon, Grand Rapids Christian: The Eagles have three doubles pairs made up of seniors, and Warners and Kwon are the top seed at No. 1. Warners was part of the No. 1 runner-up with a different partner in 2019.

These three have been the top three in the rankings all season, and in this order since the second poll was posted. University Liggett is the reigning team champion and has claimed three of the last five Division 4 titles with victories as well in 2016 and 2017. St. Francis is a frequent contender and seeking its first championship, having come in runner-up for the first time in 2018. Unity Christian was the team runner-up a year ago, also its highest Finals finish.

Traverse City St. Francis: A singles lineup full of underclassmen and a doubles lineup packed with seven seniors or juniors will attempt to take the Gladiators the final step for the first time. All eight flights are seeded and six are top seeds: Tristan Bonanni at No. 2 singles, Owen Jackson at No. 3 and Chris Bobrowski at No. 4; and Cody Richards and Ben Schmude at No. 1 doubles, Charlie King and Derek Berta at No. 3 and Tommy Puetz and Eli Schmude at No. 4. Richards was the No. 3 singles champion in 2019, and Schmude was part of the champion No. 1 doubles that fall with a different partner.

Grosse Pointe Woods University Liggett: The Knights graduated a four-time No. 1 singles champion, but still have plenty of contenders among eight seeded flights. Sebastian Courtright at No. 2 singles and Gerry Sherer at No. 4 carry second seeds into the weekend; Sherer was the No. 4 runner-up in 2019.

Hudsonville Unity Christian: Five of the team’s six seeded flights are fourth-seeded or higher. Ben Timmermans at No. 4 singles leads the way with a second seed, and Ryan Broek is the fourth seed at No. 1 singles after entering as the fifth seed a year ago.

Andrew Solarewicz, Grand Rapids West Catholic: A senior and individual qualifier, Solarewicz is the top-flight favorite carrying the top seed after finishing runner-up at No. 1 a year ago.