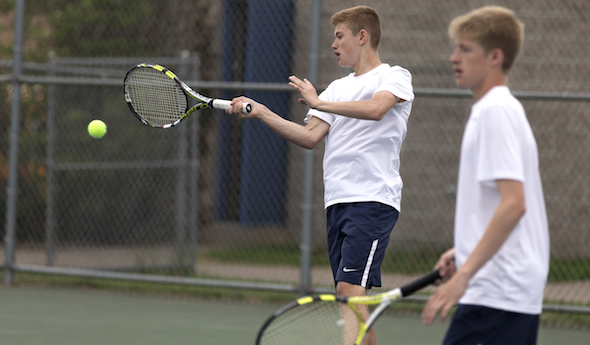 A pause in the action due to the elements for more than two hours failed to slow down Marquette junior Alec Olivier on Wednesday as he earned his third consecutive No. 1 singles tennis title in a 6-0, 6-0 conquest of Negaunee senior Luke Skewis at the Upper Peninsula Division 1 Finals at Kingsford High School.

“I guess I just played well,” said Olivier, who also went undefeated for the third straight season. “I’ve had rain delays in other matches. It’s not that big of a problem. I just drank a lot of water, did some stretching (exercises) and walked around and stayed loose during the break.

“I’m glad we got it finished today. I was willing to stay here as long as it took.”

Negaunee, which won six of eight flights, was crowned champion for the third straight season with 22 points. The Miners were followed by Escanaba with 14 and Kingsford with eight among top finishers.

“We knew there was potential to be pushed by Kingsford and Escanaba,” said Miners’ coach Kyle Saari. “The unique thing about this group is they’re coachable. They buy into everything we tell them and push each other to be better.

“It feels great to win three in a row. This all started for us in 2010, and we’ve since won seven of nine. Every group wants to build upon the success of the previous.”

Olivier went right back to work after the rain delay, placing many of his overhand shots with near pinpoint accuracy. The match ended when Skewis was unable to return one of Olivier’s serves. 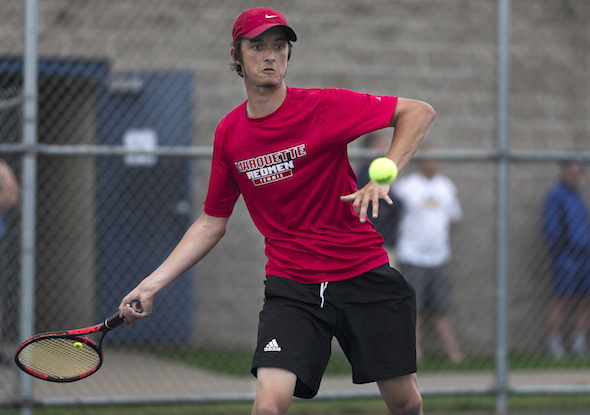 “I’ve been around (high school tennis) since 1971,” said Marquette coach Charlie Drury. “Without any question, he’s the best player I’ve seen at the high school level within that span. He’s a very dedicated player.”

Among Negaunee’s champions were juniors Peyton Anderson and Jake Larson, who rallied past Escanaba seniors Alex Valentine and Soren Thompson (4-6, 6-2, 6-1) in No. 2 doubles.

“We started playing with more energy after the first set,” said Larson, a U.P. champion at No. 4 doubles a year ago. “It took us a little while to get back in the flow after the rain delay. Then, we understood what was happening. There’s a lot of difference between No. 2 and No. 4 doubles. “I’ve learned not to get mad at myself, which didn’t work today in the first set. It’s nice seeing everybody happy with the results. Kingsford and Escanaba are always good. We know they’re always going to give us a match.”

Grassel forced the tie-breaker in the second set by overcoming a 5-2 deficit. Kumpula, however, was able to hang on and force the third. Grassel responded by taking a 3-0 lead in the finale.

“When it went to 3-0, I felt my chances were pretty good,” said Grassel. “I think I may have caught him by surprise in the third set. I felt I had a lot of momentum at the end of the second set, even though he won it. I thought (Kumpula) played well. He’s a good player for being as young as he is.”

PHOTOS: (Top) Negaunee’s Jakson Sager and Drew Lindberg volley with an opponent on the way to winning the No. 1 doubles title Wednesday at Kingsford. (Middle) Marquette’s Alec Olivier returns a shot during one of his matches; he claimed his third MHSAA Upper Peninsula Division 1 championship at No. 1 singles. (Photos by Adam Niemi.)