Saturday was no exception at the Midland Tennis Center.

Heading into the semifinal and final rounds, Cranbrook had a one-point lead over DCD with Greenhills four points behind but with a contender in each of the four singles flights.

But strong in singles and doubles, Cranbrook repeated its 2020 championship, edging both Greenhills and Country Day. Cranbrook won with 32 points, while DCD had 27. Greenhills was third with 25.

The No. 1 singles showdown was a repeat of last year’s with senior Mert Oral of Greenhills facing Cranbrook junior Owen DeMuth. Last year Oral won 6-0, 6-1 as No. 1 singles was the only individual championship contested due to COVID-driven Finals format changes.

On Saturday, Oral was gunning for his third straight title.

“We’ve played a couple of times this year, and things didn’t go my way,’’ said DeMuth heading into the match. “I’m looking to change things.’’

“I’ve played him three times this year and won all three,’’ said Oral. “I don’t know if there’s an advantage there. We know each other, and we’re going out there to do our best.’’

Up 2-1 in the second set, DeMuth started cramping in his left leg – limiting his mobility and evaporating his chance at the upset. He ended up retiring trailing 5-3.

“It’s kind of surreal right now,’’ said Oral. “Heading into this year, I definitely felt the pressure after winning the last two state titles. I couldn’t take a match or a practice off because I knew I was a target. I tried to stay focused and not think about the undefeated season and defending what I had done the last two years. I had seen everyone so many times, and I knew everyone was gunning for me. 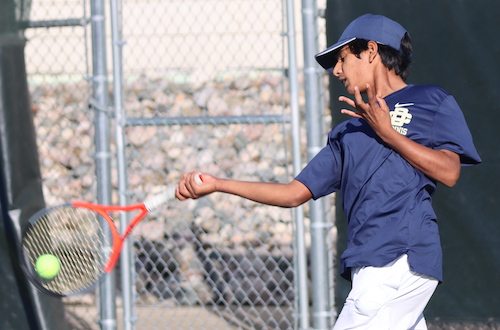 “I’ll always remember my teammates. I can’t believe it’s over. More than success on the court, (I’ll cherish) the relationships and memories with my teammates and coaches.’’

Cranbrook’s No. 2 doubles team of Jacob Coburn and Sebs Taubman defeated Country Day’s Aiden Khagany and Clay Hartje, 6-4, 6-7 (4-6), 6-3 in a matchup between past Finals flight champions.

“We won the first set. They came back on us and won the second. We got it together in the third. It was 2-2 and we have a chance to break and (Tabuman) hit one down the line for the break.’’

“We have four great captains, and this is just a solid group,’’ said Coburn. “We have some young kids coming up who are going to be good. I didn’t join the team until my junior year. It’s a great overall program.’’

In No. 4 singles, sophomore Caden Che of Cranbrook beat top seed Kabir Rajendra of Ann Arbor Greenhills 6-4, 6-5 before Rajendra retired due to injury.