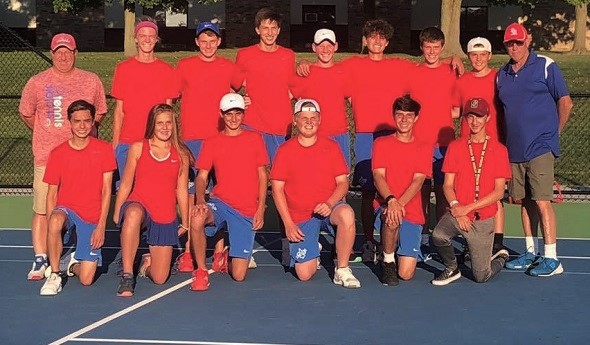 For years, the St. Clair boys tennis team used the Macomb Area Conference Red schedule as preparation for the postseason and not much else.

As by far the smallest school in the MAC’s toughest division, the Saints regularly took their lumps against perennial Division 1 and 2 MHSAA Finals contenders Grosse Pointe South and Port Huron Northern – but always kept their focus on how it would make them stronger for the regional and state competitions.

“We put ourselves in that league to get better for the state finals,” said St. Clair coach Dave Clutts, who is in his 24th season leading the program. “The teams that are in the Red are the teams that are consistently going (to the Finals), and it was never a goal of ours to win it because it was not attainable.”

A year ago, the Saints finished second and made Clutts re-think his outlook. This year, the Saints took it a step further.

St. Clair tied Grosse Pointe South 4-4 in the league opener before defeating Grosse Pointe North (7-1), Utica Eisenhower (7-1) and Port Huron Northern (6-2) to grab a share of the title, their first in the division.

“It was very exciting, because even last year we really struggled against (Grosse Pointe) South, especially,” said St. Clair sophomore Derek Distelrath, who plays No. 1 singles. “We’ve been building our program now for a couple years, and we’ve gained a lot. When we were able to finally get a share of it this year, it was really exciting. When our coach told us he’d never had a boys team or a girls team win the MAC Red – and he’s had some really good girls teams, especially – it was really exciting.”

St. Clair’s conference title came after graduating eight starters off a team that finished a program-best eighth at the Division 3 Final a year ago. The success also came despite being at least 500 students smaller than any of its competitors.

“It felt really good to be able to do it once and for all,” said St. Clair senior Eli Pinnoo, who plays No. 2 singles. “We’ve always worked hard all these years leading up to it.”

“Because we have so many freshmen, they don’t really get it,” Clutts said. “The two seniors, it means a lot more because they’ve been getting their butts kicked and they know how hard it is.”

Amazingly, during that time, the Saints have steadily been a very strong program despite the conference losses. They’ve advanced to the MHSAA Finals 21 seasons in a row, and they won a MAC White title in 2013.

Clutts sees the program entering a new level, however.

“The big thing is the middle school program we started nine or 10 years ago,” Clutts said. “That’s where we’re getting those good kind of club players that were always at the top of our lineup, now they’re playing their role. Now we have kids who can play those top spots, and all those club players who can fill in behind them.”

Between the singles players – Distelrath, Pinnoo, No. 3 Michael Mascarin, and No. 4 Ian Pinnoo – there are only two losses, and both came in three sets. Clutts said he feels that foursome has the potential to all reach the final of their respective flights at the MHSAA championship tournament Oct. 18-19 at Kalamazoo College. Eli Pinnoo did it last year, finishing runner-up at No. 2 singles after dropping a three-setter in the final.

St. Clair’s doubles teams are inexperienced but solid, as Urban and Quinn Schwarz are the only returners from last year’s team. Schwarz plays with his sister Hadley at No. 1 doubles, while Urban plays with Joey Fajardo at No. 2. Eli Lohr and Patrick Mason are the No. 3 doubles team, and Will Wentrack and Jared Kramp are at No. 4.

The team is ranked No. 5 in LP Division 3, and has seen three of the top four teams – tying No. 4 East Grand Rapids 4-4 and losing to No. 3 Detroit Country Day and No. 2 Bloomfield Hills Cranbrook Kingswood each by a score of 5-3. The Saints have a match with top-ranked Ann Arbor Greenhills coming up Oct. 2.

While scheduling tough is obviously nothing new for Clutts, what is new is the top teams seeking St. Clair out, which Clutts said is now happening as each of the top teams jockeys for seeding.

“That says a lot for sure,” Distelrath said. “With these top schools, they didn’t know who we were a couple years ago. Now they’re actively looking to play us, which is really cool because they can respect the strength of our team.”

A top-three finish at the MHSAA Finals is the goal for this year’s Saints team, and it’s something they believe is realistic. But even without that, this two-year run has already been one of, if not the most successful in the program’s history.

“It’s pretty amazing,” Eli Pinnoo said. “Just knowing that the time I’m there, that’s one of the best it’s been so far – that's just crazy.”