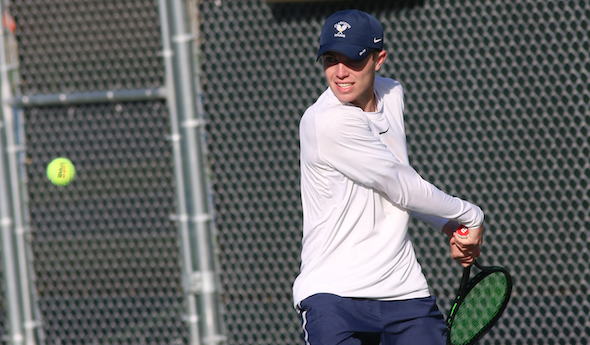 MIDLAND – Tom Pullen was just glad to be in the hunt.

The 28-year Ann Arbor Pioneer head coach, who is 75½ years old, had his team in a dead heat with rival Huron for the MHSAA Lower Peninsula Division 1 boys tennis title Saturday at the Midland Tennis Center. They were separated by one point, 21-20, going into semifinal play.

“I don’t care whether we win or lose,’’ Pullen said at that point. “This is a Cinderella group. We’re young. I’m losing three great net players, but it has been a long time since we’ve been in contention. This keeps me revitalized. We’ve had a great year. We knew Huron would be here. They’re a powerful team. We’ve beaten them a few times, and they’ve beaten us. We don’t really care about rankings. The kids have beaten teams ranked higher than them, so it doesn’t matter.

“No matter what, it has been a great year.’’

Two rounds later, the rivals finished in a tie and as co-champions. Pioneer won its last three matches to deadlock the score 27-27, capturing a share of the crown.

The key match late in the day was at No. 3 doubles with top-seeded Huron pair Sammy Clyde and Jacob Hejazi against Pioneer’s Drake Malcolm and Evan Roopas for the fourth time this year.

Clyde had been part of a doubles title last year and needed a win with Hejazi to clinch the team championship.

“We tied the first match because we couldn’t finish,’’ said Hejazi of the rivalry with Pioneer. “We won one and they won one, so this is the tie breaker. It’s easier because we know their weaknesses, but they also know ours.’’

While No. 3 doubles was fighting it out, Isaac Herrenkohl also kept Pioneer’s hopes alive with a 1-6, 7-5, 6-3 victory over top seed Noah Fascewski of Clarkston in No. 3 singles.

Pioneer and Huron have not only battled in conference play, but on the big stage.

Despite being out of the team picture, Clarkston had three players make it to a singles final at Nos. 1, 2 and 3.

At No. 1 singles, Clarkston’s Luke Baylis took advantage of a fatigued J.J. Etterbeek of Birmingham Rice to capture the crown, 6-2, 6-0. He joined his sister Lexi as a Finals champ, as she won No. 2 singles in 2011. Luke Baylis had made the No. 1 semifinals the last two seasons and finished No. 2 runner-up as a freshman.

“I tried to play my game and not focus on what was going on around me,’’ said Luke Baylis. “I could tell he was a little tired. I just worked the points really well and tried to stay in every point. This was my last match, so I tried to grind out every point.’’ 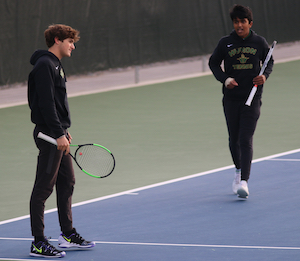 “We’ve played them five times this year and five times last year,’’ said Bai, a junior. “We’ve been the top seed the last three years, and I think the past two years we choked. We got beat in the semis.

“This was important for my team. I thought we controlled the match from the start. Because the team title was at stake, the pressure was on.’’

“We beat them during the regular season, but during the state tournament anything can happen,’’ said Tremonti.

Said Gandikota: “They were hard, but both matches against Northville and (in the semifinal Detroit) CC were tough. The Catholic Central match went three sets and that was rough; we started out slow. Against Northville we upped our energy and maintained it.’’

Old friends battled it out in No. 2 singles with second-seed Frank Piana from Clarkston facing top seed Jan Nallani from Troy. Nallani made it two wins on the year against Piana with a 7-5, 6-1 victory.

Okemos’ No. 1 doubles team of Druv Talluri and Siddharth Nagisetty formed an experienced duo. Talluri and Nagisetty both won 2017 doubles titles in Division 2 with different teammates – Nagisetty with Rohan Shah at No. 2 and Talluri with Deniz Kalfa at No. 3. In 2018, Talluri won No. 2 with Shrey Patel and Nagisetty was runner-up at No. 3 with Aditya Kandula.

This time, Talluri and Nagisetty teamed up to form the top seed in the top flight and in the final defeated Huron’s Max Brodkey and Anvit Rao 6-1, 6-3.

“After my win freshman year in 2017, some of the players changed positions and I lost my then-partner to a singles position” said Nagisetty. “We lost in the finals in 2018, so this year I was a little more focused on my fitness and conditioning. I cramped up last year in the finals. I was not going to let it happen again.

“It was a higher flight, one doubles. Druv is great. He has a great forehand and backhand and has a super good volley. That was awesome to end the season this way!’’

PHOTOS: (Top) Clarkston’s Luke Baylis returns a volley during his No. 1 singles semifinal at Midland Tennis Center. (Middle) Ann Arbor Huron’s Max Brodkey and Anvit Rao get together during their No. 1 doubles semifinal win. (Click to see more from HighSchoolSportsScene.com.)