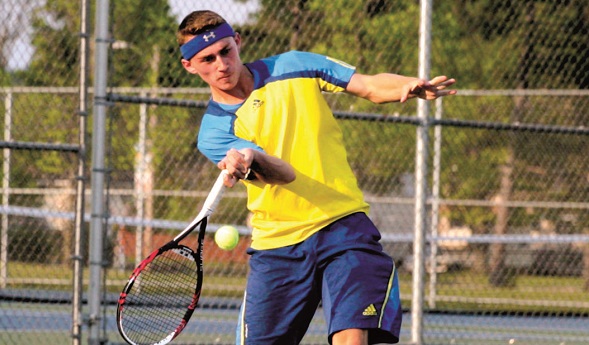 Yet, one look at the swing of the reigning Upper Peninsula Division 1 No. 1 singles champ reveals a talent above and beyond the rest of the field. A powerful "flick of the wrist" as he would call it, that most players would envy.

Szabo had it all working for him again Wednesday at the MHSAA Upper Peninsula Division 1 Tennis Finals at Kingsford High School, leading his team to its second U.P. championship in the last three years.

"Adam had it going the whole season. He never let up once," said Szabo's head coach Mark Shanks.

Szabo wrapped up a dominant season, capped by his 6-0, 6-0 victory over Josh Downs of Marquette in the No. 1 singles final. Not only did Szabo go undefeated this season, he didn't drop a set. Szabo has only one loss over the last three seasons; Downs has the distinction of putting the lone blemish on Szabo's outstanding career at Kingsford.

It's a loss the Kingsford senior wishes he had back.

"That was a pretty rough match on my part. An off day, you could say," Szabo said of his loss to Downs last season. "I wish I could have that match last year back, but this was a great end to the road. I couldn't have asked for anything better." 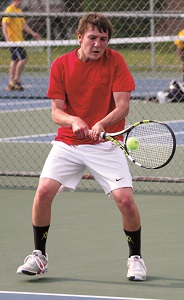 Szabo said he holds scholarship offers from several Division II and III colleges to continue his tennis career, but isn't sure that's where his heart is.

"There's some schools talking, but I don't know if I want to," Szabo said. "I don't put a lot of time into this. I might go to college, enlist in the National Guard. I could play; I'm just not sure I want to."

Shanks is certain Szabo was a key part to the Flivvers' resurgence in tennis.

"I've known Adam since he was a second-grader, hanging out at the courts all the time near my house," he said. "I can't take credit for everything he's got; God gave him a lot of gifts, but I was out there to throw him a lot of balls.

"He's one of my top players,” Shanks added. “His brother who is four years apart was also a U.P. champ all four years. They're both good hockey players. Their father (Tony Szabo) gave them good genetics. He played on Northern Michigan University's national championship team in 1991."

Kingsford won the title with 16 points, winning five of eight flights. They were followed by Negaunee at 12, Marquette 10, Menominee 10, Gladstone 1, and Escanaba 1.

Also winning titles for the Flivvers were Chris Roell at No. 3 singles, Alek Shanks at No. 4 singles, Dan Harrington and Joe Gregory at No. 1 doubles, and Noah Voss and Austin VanPembrook at No. 3 doubles.

Harrington and Gregory won the No. 1 doubles title for the second straight year, battling out a heavily contested match against Karl Bittner and Alex Roth of Negaunee 6-4, 3-6, 6-3.

"We had our ups and downs today," said Harrington. "It was a little shakier than the last time we played them. They gave us a tough time."

Added Gregory, "We dropped the second set because we weren't playing aggressive enough. We picked it up at the end though."

Shanks was especially proud of his No. 3 doubles team that finished undefeated despite a switch of partners midway through the season. His son, Alek, won at No. 4 singles, defeating Negaunee's Ben Luke 7-6 (8), 6-2.

"That's the reason I'm still here, truthfully," Shanks said of the opportunity to coach his son. "I would have seen this group of kids through, but he'll keep me around a couple more years. It's always fun to see your own blood and kin out there playing. He lost three times to Luke this season. Last year, it was just the opposite. Alek beat Luke three times and then lost to him in the finals. They reversed roles this year."

The champions certainly earned it on this sporadic weather day. The start of the tournament was delayed three hours due to morning rain. There were further rain delays caused by brief downpours later on. Coaches squeegeed the courts in an effort to dry them faster, while players rested up. Most seemed to think the delays were a welcome reprieve.

"The rain delays actually helped," said Marquette's Noah Gannon, who won the No. 2 singles flight. "I was pretty tired after my semifinal match with Ryan Syrjala (a 6-0, 6-7 (3), 6-1 victory). The rain delays gave me a break to re-focus myself and get the job done."

"It got pretty intense toward the end," said Gannon. "His serve was really hard to return. Eventually, I just pulled it out. I really felt confident in this match. I could feel the momentum coming through after I beat Syrjala"

Gladstone and Escanaba each advanced one flight to the semifinals before bowing out. Gladstone head coach Dan Williams had to tip his hat to the champions from Kingsford, who eliminated the Braves' No. 1 doubles team of Tyler Wells and Jeremy Kadish.

"Kingsford is the No. 1 team, so if you're going to lose to any team, you want to go out playing the best," Williams said.

"This team will go down as the best team record-wise in the history of Kingsford school," he said. "We were 14-0 in dual meets; eight of those were 8-0 shutouts. We were 5-0 in tournaments. This is the first Kingsford team to go undefeated and sweep all five tournaments."