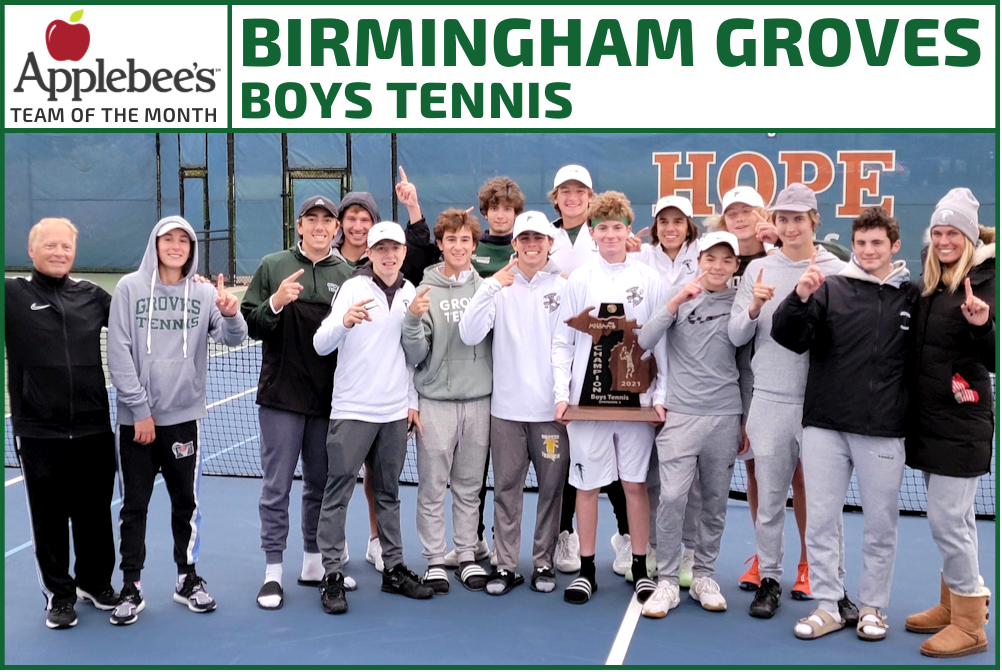 The Birmingham Groves boys tennis program has fit well among the most consistent in its sport at the statewide level for a number of years. The Falcons, in fact, had finished runner-up five times since 2004, and eighth or higher at the Lower Peninsula Division 2 championship tournament 10 of the first 11 seasons under coach Dave Farmer.

But this fall, they were able to take the long-awaited final step.

A total team effort made that happen Oct. 15-16, as Groves finished first this time with 27 points – one more than two-time reigning champion Grand Rapids Forest Hills Northern – to earn its first MHSAA Finals championship. The Falcons also are the MHSAA/Applebee’s October “Team of the Month.”

Groves had only one flight champion that title-clinching weekend in Holland, but earned 14 points from doubles and 13 from singles.

“Balance was the key factor. In past years, the majority of our points came from our singles,” Farmer said. “My 1-4 doubles were comprised of six seniors and two juniors. (There were) no real lessons learned (from past Finals) – just knowing leadership must come from the juniors and seniors.”

Incredibly, everyone contributed something.

That lone flight championship came at No. 3 singles, actually from the lineup’s lone freshman, Michael Liss. He won every set he played that weekend.

Then came three flight runners-up – junior Nolen Kovan at No. 1 singles, junior Dylan Wolf and senior Alexandras Abarius at No. 2 doubles, and junior Andrew Wietzman and senior Gabe Klein at No. 4.

Every last point mattered, as one fewer would’ve meant a shared championship and two fewer would’ve pushed Forest Hills Northern back up top and Groves into another “just-missed” finish.