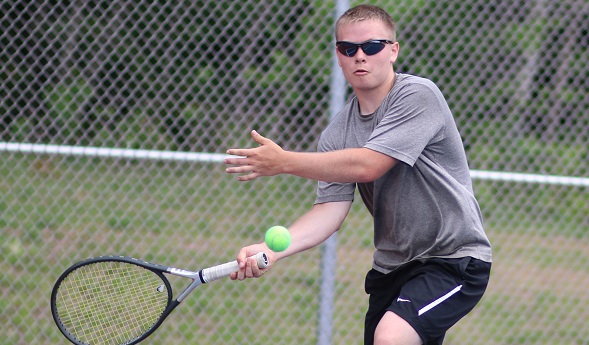 ISHPEMING – It had been a while since the Iron River West Iron County boys tennis team stood at the top of the Upper Peninsula.

But Wednesday afternoon, the Wykons finished the climb again.

After ending runner-up to Ishpeming Westwood the past two seasons, West Iron edged the Patriots 20-18 to take the MHSAA Upper Peninsula Division 2 title, its first since 2013.

“We looked good today,” WIC head coach Joe Serbentas said. “Sometimes when you have multiple teams, some teams can play a role in what is going on and it just happened that it was us and Westwood in the finals. They were in all eight and we were in seven of the eight. These guys have a lot of confidence, and we have a lot of seniors on the team and they’ve been looking forward to today. We’re coming off a Great Northern Conference championship, so there’s a lot of confidence in the guys.”

Even though his team had won the last four Division 2 titles, Patriots head coach Chris Jackson knew going into the meet that it was going to be hard to win a fifth straight against a WIC squad that hadn’t lost all season.

“The day kind of went as it was set up,” he said. “I think West Iron had six of the eight number one seeds. I think we had seven of the eight two seeds. We got everyone to the finals, which was important. The kids performed really well today. It was just a little short.”

The Wykons won three of the four doubles championship matches to help lift them over the Patriots. It wasn’t easy though as Brandon Henschel and Kevin Ballinger dropped the first set to Westwood’s Dylan Willey and Jared LeRoy at No. 1 doubles, but came back to take the next two. On the other end of the court at No. 3 doubles, Steven Nelson and Caden Pellizzer took the first set from the Patriots’ Connor Traver and Hudson Uren but had to fight off the Westwood tandem in the third to win the match.

Jackson was impressed with how Willey and LeRoy performed, battling Henschel and Ballinger to a hard-fought third set.

“They were a three seed so they had to play the extra match,” he said. “Munising beat them earlier in the year, and they came out and played really well. Now they played against one of the best No. 1 doubles teams in the U.P. and they took them to the third set. It’s fitting that they’re a group of seniors too.”

Over on the singles side, the Wykons’ Holden Ross and Neil Tomasoski easily took their matches at No. 1 and No. 2, respectively, and Serbentas praised Ross for the strong effort he put in against Westwood’s Adam Hyttinen.

“Holden was hitting well early in the season, but then he got into a little funk where he was guiding a little too much and being a little too patient and not attacking some of the balls that he could’ve attacked like he did earlier in the year,” Serbentas said. “Today, he just let it go. He wasn’t holding any punches. He gave him everything he had. Adam is a good player, so you’re going to have to move him around and hit it hard by him. Holden did a lot of good things today to get himself in good positions against a quality player.”

Westwood’s Matt Paavo won the No. 4 final, and Munising earned its only title of the day at No. 3 singles when Mitchell Coyne earned a two-set victory.

“Mitch is having a good year,” Mustangs head coach Rod Gendron said. “He’s coming off the GNC Championship in straight sets, and coming here on (the Patriots') home courts he played a nice first set. He’s got good control, he thinks about things while he plays now and uses some good tactics to mix it up.”

The Mustangs finished third overall followed by Ishpeming, Iron Mountain and Gwinn. Gendron said that that his team needed to have a lot go its way to win the meet and even though it didn’t happen, he was happy with the result.

“We finished third, where we should have this year,” he said. “Coming in, we had to have some major upsets and we came close in a few matches. I was happy though. They played their best today, and that’s what we always hope to do. Just play to the last point, and don’t give up. That’s all you need to do.”

That’s what the Wykons did as well and with that strong effort, they're now bringing a championship home to Iron River.

“This could be probably one of our finest seasons,” Serbentas said. “We’re undefeated, we were GNC champs and a U.P. championship. I don’t know how you could have a better season than that.”

PHOTOS: (Top) Munising’s Mason Schnieding keeps his eye on the ball during a No. 1 singles match against Westwood’s Adam Hyttinen at the MHSAA Upper Peninsula Division 2 Finals on Wednesday at Westwood High School. (Middle) Hyttinen returns the ball against Schnieding (Photos by Rachel Oakley.)