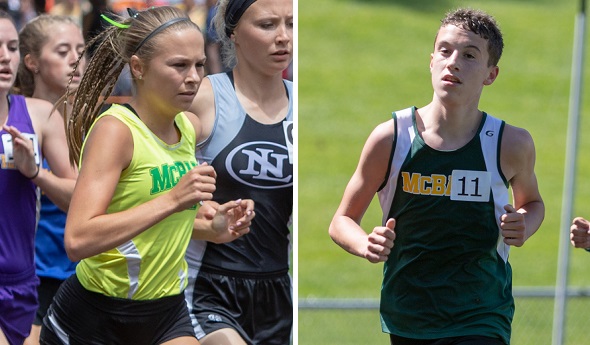 MCBAIN — It’s been said that records are made to be broken.

McBain twins Keegan and Klaudia O’Malley seem to have taken that notion to heart.

“They hold all those distance records,” said McBain boys track & field head coach Pat Maloney. “Going down in history, they’re going to be talked about. People will be compared to them for years to come.

The O’Malleys certainly come by their running prowess honestly. Their father, Tim, has been the cross country coach at Cadillac for the past 18 years and has spent the last seven years as an assistant track coach at McBain. Their mother, Tasha, coaches cross country at McBain. Both parents have been active in competitive running as well, with Tasha having competed in multiple Boston Marathons among myriad other races.

“Our life pretty much revolves around running — in a fun way, not in a bad way,” said Tim O’Malley. “My wife raced a lot. I would just take the kids and pace them in the 5Ks that they wanted to run. They seemed to like it.”

The O’Malley children – including Maggie, the twins’ younger sister by two years – didn’t know any differently than being immersed in a running lifestyle.

Tim O’Malley jokingly says Keegan and Klaudia’s running careers actually began with running as a form of babysitting. Even when they were as young as 7 years old, the O’Malley twins would tag along with their father to practice. They attended cross country camps with the team, would run right along with the group, and even get to compete in open races following meets.

“I loved it and his team was so supportive, so I just got into it,” said Keegan.

Not only did the twins enjoy running, but it became quickly apparent that they were good at it too. Really good, in fact. Keegan and Klaudia started establishing school records in elementary school, and that continued as they moved into middle school and then high school. No one was surprised to see them become dominant runners at the high school level, to say the least.

“They hold all those distance records,” said Maloney. “People have been waiting for them to shine, and they haven’t disappointed by any means.” 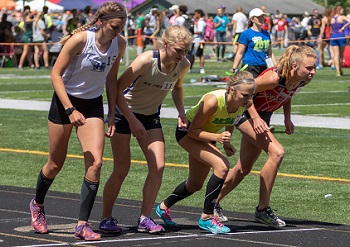 Klaudia is the four-time Highland Conference champion in the 800 and 1,600, and a three-time winner of the 3,200 — she didn’t run that event this year. She has qualified for the MHSAA Lower Peninsula Division 3 Finals four times in the 1,600, three times with the 3,200 relay team, and twice each in the 800, 3,200 and with the 1,600 relay, earning all-state honors a total of six times across four events. She is qualified for the Finals in the 800, 1,600, 1,600 relay and 3,200 relay this season. Three of the four school records she holds came as a result of breaking her own record-setting times.

“Last year I didn’t feel as confident, but this year I feel a lot stronger and a lot more confident with my running,” said Klaudia. “It’s sweet to show, just because I’m from a small school, you can still have a lot of talent.”

Keegan is a three-time league champion in the 3,200 and twice has won the 1,600 and ran with the winning 3,200 relay. He also has four Regional crowns to his credit — twice winning the 3,200. He is qualified for the Finals in the 1,600, 3,200 and with the 3,200 relay. He battled an injury a year ago but has seemed to make up for any lost time with a dynamic senior season. That includes shattering Ron Eising’s school record in the 3,200 that had been around since 1977 with a stunning performance at the Shepherd Invitational that eclipsed Keegan’s personal best by 16 seconds.

“It was kind of like a dream come true because the guy who had the record (Eising) is very supportive of me,” said Keegan. “He came to the track and mentored me. Told me he wanted me to beat it. He wanted me to take after him. I put in a lot of training in the offseason, and I was really surprised when I got it, but I knew I could do it. I wasn’t terribly close. It was kind of a big PR (personal record).”

The twins will complete their high school careers at the Lower Peninsula Division 3 Finals at Jenison High School, then are taking their talents to Grand Valley State University in the fall. They say they are close and relish the idea of heading in the same direction for the next chapter of their careers.

“At first I didn’t really want to (go to the same school),” said Klaudia. “But senior year got going, and we got running together again. Now I’m glad I chose the same college as him. I’ll have a buddy there right away and I can still watch him and cheer him on at meets.”

Maloney has seen the work Keegan and Klaudia put into running, and he’s witnessed the records fall. He will be watching keenly to see how the O’Malleys perform at the collegiate level.

“They’re going to do a great job representing McBain, their family and northern Michigan runners,” he said. “I think they’ll be right in the heat of things for the next four years.”