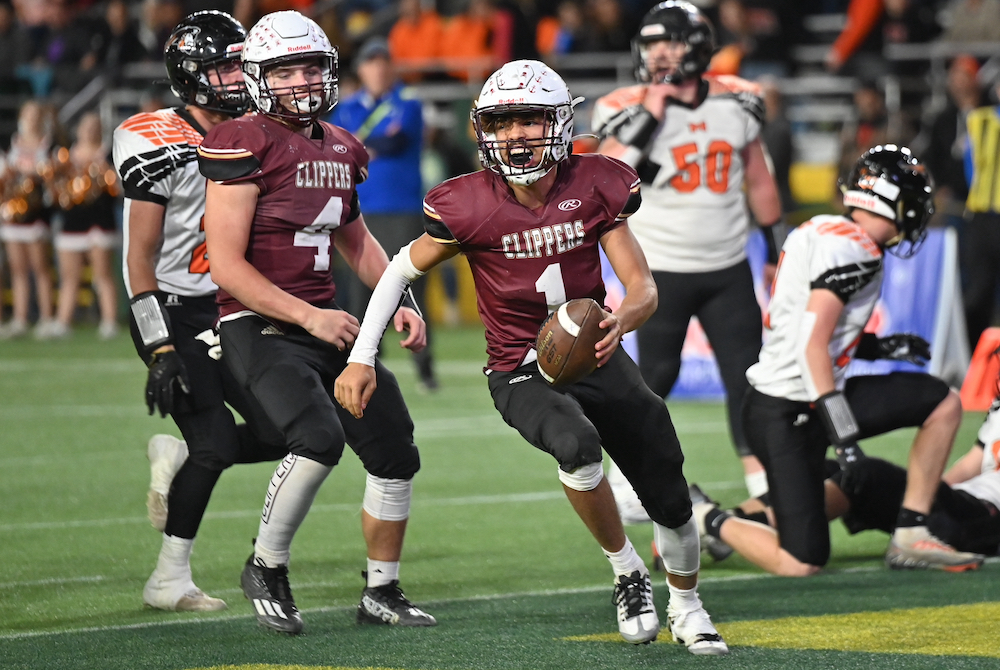 MARQUETTE – When their playoff run ends, teams can normally find some consolation if their loss comes to the eventual state champion.

But that got a little old for Martin.

The Clippers fell to Adrian Lenawee Christian in Semifinals the past two seasons and then watched them go on to win two 8-Player Division 1 championships.

But this year was different; this was Martin’s year. The Clippers (11-2) took care of Lenawee Christian in the Regional round of the playoffs with a convincing 56-14 victory. And it was the Clippers lifting the Finals championship trophy at the Superior Dome on Saturday after a 74-24 victory over Merrill.

“This was our goal at the beginning of the year; it’s been our goal the last couple of years,” Martin coach Brad Blauvelt said. 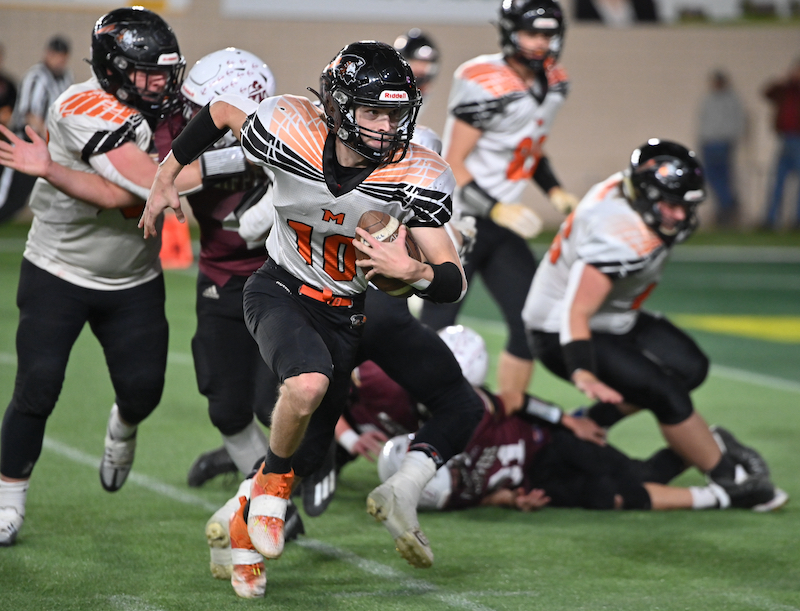 The Clippers accomplished their mission with a star quarterback, JR Hildebrand, who ran for 191 yards and four touchdowns to lead the program to its first Finals title since his dad won one in 1987. They also made some big plays at big moments and relied on a stout run defense to contain Merrill, which made it closer than the score indicated.

“When I first found out what a state championship was, I knew that was our goal in the end,” said running back Karter Ribble, who rushed for 142 yards and three touchdowns. “Then falling short the past couple years and then progressively getting better throughout the year, this year I knew it was coming. I knew we had what we needed to get to this moment.”

And what a moment it was for them.

The Clippers took a 20-0 lead thanks to a pair of touchdown runs by Hildebrand and another by Ribble.

“We have a very fast team, and we used that to our advantage,” Blauvelt said. “We got outside, broke a couple tackles. We started fast all year, and tonight wasn’t any different.”

Merrill hung around throughout the first half.

Vandals quarterback Joel Tack, who threw for 328 yards and three touchdowns, found Kaleb Walker for a 90-yard score late in the first quarter. It was 20-8 heading into the second.

Ribble ran 42 yards for a score 4 minutes, 14 seconds into the second quarter, to answer, and Hildebrand added a 10-yard TD run to put Martin ahead 34-8.

Merrill (12-1) struck with another big play, a 68-yard TD pass from Tack to Denver Coty that seemed likely to give the Vandals some momentum.

But Taegan Harris had other ideas.

“That was huge,” Blauvelt said. “The game was kind of teeter tottering right there. I know we still had the lead, but we didn’t really feel comfortable after all that happened.”

Merrill turned it over on downs before the half was over, and Martin added a 25-yard field goal by James Blackburn for a 43-16 halftime lead.

“If we don’t give that up, we probably are able to do some different things,” he said. “Unfortunately, No. 1 (Harris), we knew he was a speed guy for them. He got the edge on us, and we got sucked down inside. Kicking it to the corner there, everybody drove down into that corner and he got around to the outside. That was a backbreaker for sure.” 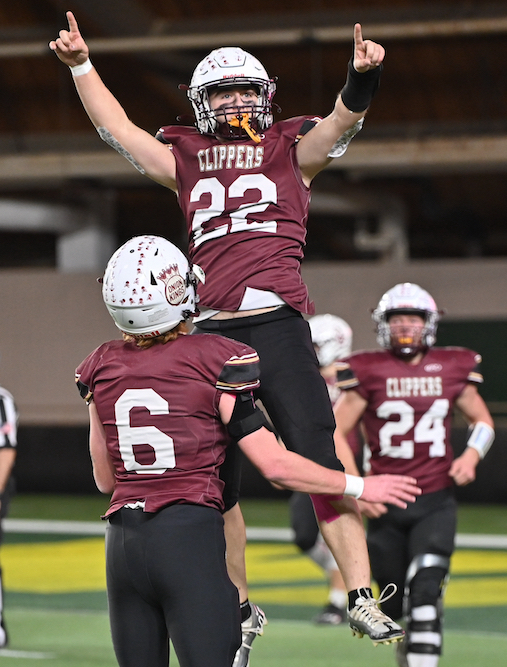 Merrill scored first in the second half, and it was the play of the day. Walker made a spectacular one-handed catch and then ran free to the end zone for a 67-yard touchdown with 8:30 left in the third quarter.

“We felt confident we could shut them down in the run game,” Blauvelt said. “And then we knew they were gonna chuck it on us, which they did. And their quarterback can throw, and their kids can catch. That one throw across the middle was a phenomenal catch.”

But it was all Martin from there. Hildebrand ran 57 yards for a TD, Braeden Shanley rushed 37 yards for another, Ribble ran one in from two yards out and Gavin Meyers hit Sam Jager for a 75-yard touchdown pass to wrap it up.

“Hat’s off to Martin,” Wiley said. “They did a tremendous job. They lost the last two years to the team that went out and won the state championship. They were loaded coming back, and they were a good team.

“... I thought we did some good things. We shot ourselves in the foot. But when you lose to a team that is of that caliber, there’s no shame in that. We played our hearts out right to the very end.”

“If he’s not the Player of the Year in 8-man football, I don’t know who is,” Wiley said. “He’s a legit college-level football player.”

A tough schedule helped Martin go back downstate with a championship trophy. The Clippers defeated Division 2 runner-up Mendon to start the year and lost a pair of games to unbeaten teams, Grand Rapids NorthPointe Christian and Bridgman.

While it may not have prepared them for the awe of playing in the Superior Dome and the Final, it certainly helped them during their playoff run.

“Walking in the Dome the other day and seeing it for the first time, we knew it was a big moment,” Blauvelt said. “However, playing some good teams, quality competition throughout the year, got us ready. The last couple years, we’ve been undefeated going into playoffs and we had two losses this year. I think that totally helped us prevail, and the moment wasn’t as big as it could have been.”

And now they’re finally state champions. Nothing much bigger than that.