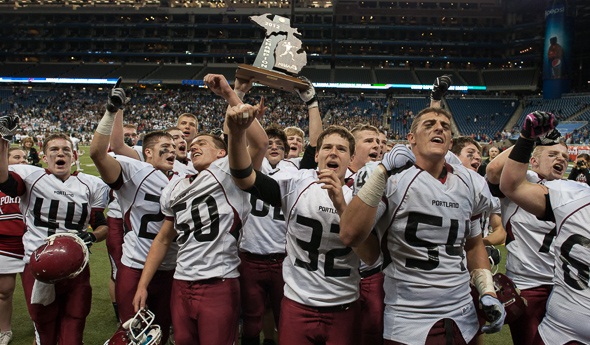 DETROIT – Half of Portland’s division of the Capital Area Activities Conference has made it to the MHSAA Finals over the last three seasons.

So before bringing the Raiders to Ford Field this week, coach John Novara spoke with 2011 Division 5 runner-up coach Jim Ahern of Lansing Catholic, 2010 Division 4 runner-up coach Steve Kersten of Williamston, and a number of others who had occupied the spot he was about to step into Saturday afternoon.

They gave him plenty of advice. But one piece was offered by them all: Stay true to yourself and what you do.

Most of the Raiders’ 90 wins in Novara’s 14 seasons have been more a result of force over fancy: tough running and physical defense, with just a little flare mixed in. So it only seemed right that Portland’s first MHSAA football championship – and team title in any sport – would come with a semi-ugly 12-9 win over Grand Rapids West Catholic that did well in representing the legacy of those who brought the program to the brink.

“We worked hard just like they taught us, and they were in the weight room 24/7, and we looked up to those guys,” Portland senior guard/linebacker Adam Goodman said of his predecessors. “We all had brothers and sisters who went to this school, and we were close with the others guys. They told us to go in the weight room, and we listened to them. They set the foundation for Portland football.”

This is the 10th straight season Portland (13-1) finished with a winning record, but the first time it had won more than one playoff game. By also beating Flint Powers Catholic, the Raiders defeated both the 2011 and 2010 Division 5 champions on the way to this title. West Catholic was that 2010 champ – and beat Portland in the District Final that season.

In fact, three of Portland’s last four playoff losses came to teams that ended up at Ford Field.

“ We've been close every year,” Raiders senior guard/linebacker Dylan Carroll said. “We always face the state champion or runner-up every year, and we finally pulled through.”

The Final played out like much of Portland’s season. The defense, with 10 seniors, often set the tone as the offense – which should return eight starters in 2013 – learned on the fly. West Catholic (10-4) became the seventh opponent to score in single digits. But that was necessary; the Raiders scored their 12 points over the game’s first 15 minutes, and struggled to do much more during the final 23 as West Catholic held them to a season low. 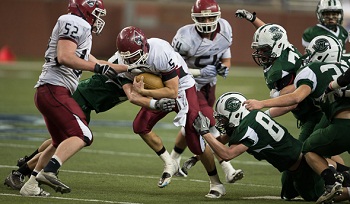 “Our defense has been stepping up all throughout the playoffs, so we knew they were going to give us another chance to get something going on offense,” Falcons junior running back Andy Corey said. “We couldn’t ask for anything more.”

West Catholic’s first score didn't come until Corey’s eight-yard run with 1:02 to play in the third quarter. The other two points came on a safety 2:13 into the fourth. Total, West Catholic had 13 possessions. But three ended with interceptions and two more on turnovers on downs.

Still, the Falcons had one last opportunity to take the game during the final three minutes. After recovering a fumble at their 32-yard line and converting one fourth down, West Catholic had first down and goal to go from Portland’s 10.

But the Raiders stepped up this time, holding the Falcons to one yard total on three straight runs. After a five-yard penalty, West Catholic completed a screen pass that was stopped well short by Portland senior Jeffrey Feldpausch with 50 seconds to play.

“With the playmakers they have, you’re always wondering if you’re going to get them stopped one more time,” Novara said

Portland’s scores came on a one-yard run by junior quarterback Tanner Allison, and then one of the most memorable plays of Finals weekend. Allison took the snap at his 6-yard line, faked two handoffs and spun nearly all the way around as West Catholic tacklers began to pull him to the ground. Right before they succeeded, he launched a seemingly no-look pass into the left middle of the field that somehow got past everyone. Junior Auston Brandt ran under it and turned it into a 94-yard touchdown catch – the third longest in MHSAA Finals history.

Allison completed 7 of 16 passes total for 214 yards, with four of those for 178 yards to Brandt. Corey ran 26 times for 146 yards, and sophomore quarterback Travis Russell completed 20 of 39 passes for 209 yards for the Falcons

Carroll had a game-high 13 tackles for Portland. Senior defensive back Joe Harmon had 11 tackles for West Catholic, and junior linebacker Max Boorsma had 10.

“When you take a group of football kids like we did this year – we had six sophomores who started for us, an entire new defensive coaching staff, a new offensive line coach, new running backs coach – and you kinda rally together and you end up playing in a state championship game, the entire coaching staff, the entire program did something right.” West Catholic coach Dan Rohn said. “We’ll be back. We set the goal in January to be back here, and we hope we will.”

Click for full statistics and to watch a replay of the game. See below for the full press conference.