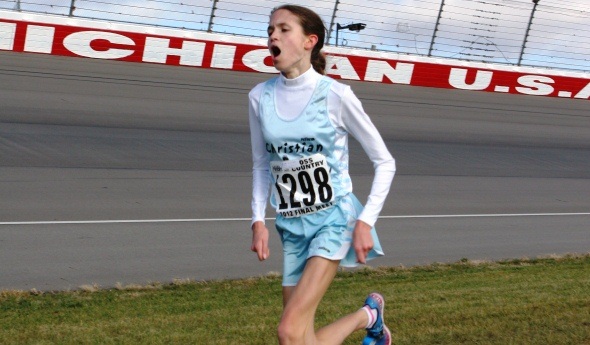 BROOKLYN — Julia Bos of Grand Rapids Christian seems to answer more questions about the style of her running, rather than the substance.

Bos runs with her mouth wide open, something she has done ever since becoming a competitive runner.

“Have you ever swallowed a fly?” was a question posed to her Saturday at the MHSAA Lower Peninsula Division 2 meet at Michigan International Speedway.

“Once I caught a bumble bee this summer; it wasn’t very fun,” she said. “It stung me on the tongue. I spit it out right away. It was all fuzzy. I’m just thankful I’m not allergic to bees.”

Bos has a ready response to inquiries about her signature facial expression.

“People ask me why and I say, ‘Optimum oxygen absorption,’” she said. “I don’t really think about it consciously. I’m just going, ‘If I look silly, oh well, it works.’”

Bos repeated as the Division 2 champion with a time of 17:20.4, the second-fastest of the day in all four divisions. West Bloomfield’s Erin Finn won Division 1 in 17:07.9.

Bos, who was undefeated as a senior, bolted to the lead and was never threatened, winning by 28.7 seconds over Cedar Springs sophomore Kenzie Weiler. Bos reached the mile in 5:20, about five seconds faster than usual, as she wanted to dictate the terms of the race.

“I was aggressive early on in the race,” Bos said. “Last year, the first mile was really slow. Everybody in the front was trying to be tactical. We went out in 5:40 something. That was really slow for a state meet. This year, I tried not to think of the people by me and go at my own pace.”

Bos almost quit cross country before ever realizing her potential as a back-to-back MHSAA champion who will have her choice of major college programs at which to further her career. She said the pressure to succeed became too much until two years ago when she took fourth at MIS and led Grand Rapids Christian to the team title.

“I had kind of a revelation during my sophomore year,” she said. “I was basically trying to put all the pressure on myself and run for myself and be, ‘Oh, my word, I just always have to win,’” she said. “I would get so nervous during the school day if we had a meet after school; I could hardly take it. I almost quit the team, actually.”

Her coach and parents talked her out of it.

“I realized it’s so much more fulfilling to run for God and not for myself and not for other people’s expectations,” Bos continued. “I know that He will be happy with whatever I do, whether it’s a (personal record) or a slower day, as long as I do my best.”

Ada Forest Hills Eastern romped to the team championship by a 93-150 margin over Spring Lake. Grand Rapids Christian was third with 182 points, as Grand Rapids-area schools took five of the top six places.

Senior Ciara Cullen was fourth among team runners and sixth overall in 18:10.6 to lead Forest Hills Eastern, which had five runners cross before Spring Lake’s No. 4 runner.