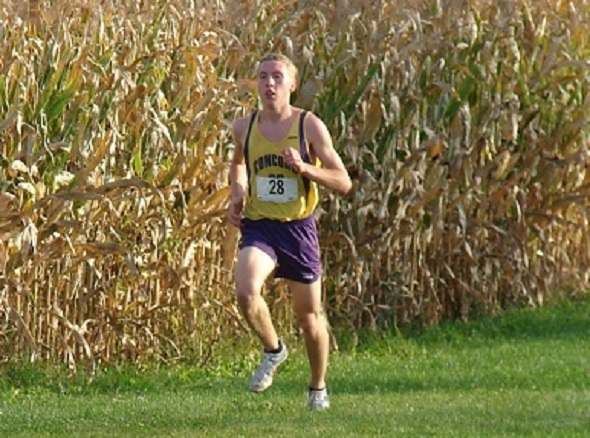 And it seems a little odd, considering his resume.

The Concord senior has never finished lower than 10th at an MHSAA Finals. So far this fall, he's placed first in every race but one – Michigan State’s Spartan Invitational, where he was seventh in the “Elite” race against many of the state’s best from all divisions.

But if Nousain is first to cross the finish line for the Division 4 Final, he won’t celebrate right away. Instead, he’ll turn around and wait.

There’s definitely a pressure in having one last chance to win an MHSAA title. But Nousain has poured that into his team, which he is focused on leading to its second team championship in three seasons.

“I think the team relaxes me. If I focus on helping my teammates, that takes the pressure off of me,” Nousain said. “That’s the one thing I have changed. I’m a little more concerned about team this year.”

The Yellow Jackets have followed their leader to a spotless team record so far, including a Regional win without him. Concord is ranked No. 1 in Division 4 by MichiganCrossCountry.com’s coaches panel.

Nousain is fresh off his second-straight championship at the Jensen Memorial meet, which pits all of the Jackson-area cross country teams. He crushed the field in 16:05.7, 35 seconds faster than the runner-up. It's been that kind of fall, coming off last year’s state final when Nousain ran a 15:51.7.

Leading and following is nothing new for him. He’s the seventh of nine children in a running family. All but one of the first six ran high school cross country, and three of his siblings have gone on to run at the college level.

Unintentionally, Nousain’s sitting out the Regional allowed younger brother Mason, a sophomore, to place as Concord’s fifth runner that day. Mason has been the recipient of some of Spencer’s best lessons.

Starting in seventh grade, Nousain began training hard during the winter even as some of Concord’s high school runners were a little less serious, Yellow Jackets coach David Jordon said. Nousain has imparted that work ethic on his younger brother, and also become a target for some of the team’s younger runners to chase during practices.

“He wants to go out and run a great race, and everybody would love to win. But more of his focus is on how his teammates do,” Jordon said. “He’s definitely matured and seen the bigger picture. It’s exciting to win, but when the team wins, it’s more exciting.”

That might add some of the anxiety Nousain feels of late. Family, friends and others in the community expect him to lead Concord to another MHSAA team championship. But when Saturday’s starting gun goes off, he’ll only be able to control his race – and use the lessons he learned himself during the two near-misses.

The first time Nousain took second at an MHSAA Final, he was excited. The only runner to cross the finish line ahead of him was teammate Kyle Stacks, and their Concord team had just won the 2009 overall championship.

The second time Nousain finished second – a year ago this weekend – Nousain was a little disappointed. He’d expected to be first. He didn’t feel like he improved at all.

On Saturday, he has one more chance. And only one way to get better individually, although he’ll still celebrate coming in second if his team comes in first. He’ll race as he has all fall – start smart, close hard in the last mile, and then watch for more purple coming soon after.

“It’s going to be amazing. I love watching not just Mason, but my teammates improve,” Spencer said.

“In the sense of watching them be happy, when we win as a team, I’ll be happy. It makes me proud to say I helped them.” Also in Division 2 this time is Allendale and Ali Wiersma, last season’s Division 3 MHSAA champion. Bos (17:43.2), Wiersma (17:59) and Schulist (18:19) were the top three, respectively, at last Saturday’s Regional at Allendale.

O’Neil (18:03.55) was third at the Benzie Central Regional behind two more runners who could break into the top group this weekend, including the possible favorite: Cedar Springs freshman Kenzie Weiler won that Regional in 17:13.07, and her junior sister Katie was runner-up in 17:57.55.

Also in Division 2, in the boys race, Chelsea senior Bryce Bradley will try to finish with a championship after improving from 20th as a freshman to 10th and then to runner-up last season.

At last year's final, he finished less than a second ahead of Dearborn Divine Child’s Nicholas Soter, who also will be back at MIS. They'll both might have to fend off Mason Tanner Hinkle, who beat Bradley by 19 seconds in their Regional.

Only 15 girls have won at least three MHSAA cross country individual championships. But Breckenridge sophomore Kirsten Olling has lots of time – and at least a few opportunities.

Olling won last season’s Division 4 championship in 18:09.8. Fast forward to last weekend’s regional at Harbor Beach, which she won in 17:17 – more than 2 minutes faster than the runner-up.

Click for Saturday's schedule and race information, all Lower Peninsula finalists and links to regional results, and check back Saturday for coverage from MIS. Go online to FoxSportsDetroit.com for live coverage via the Finish Line Camera and live audio commentary throughout the race from reporters around the course.