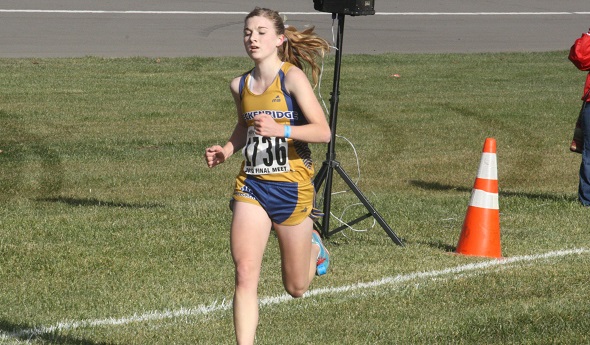 Breckenridge High School has a mere 244 students. But one could finish this weekend's MHSAA Finals among an elite few in state girls cross country history.

Three-time champion Kirsten Olling already is one of the all-time greats. But if she can win one more title, she’ll become just the seventh to claim four – and first in the Lower Peninsula since Rochester Adams’ Katie Boyles finished her surge in 2000.

Here's a look at the contenders to watch from all four divisions. For those who can’t make the trip to Brooklyn, MHSAA.TV will provide camera views at the start and finish lines and two more points on the course, with audio from reporters stationed along the way. Cost is $9.95 for Saturday only, which also includes access to all four Lower Peninsula Boys Soccer Finals, or $14.95 for a month pass that will allow fans to also watch live the Volleyball Semifinals and Finals and Lower Peninsula Girls Swimming & Diving Finals.

Click for Saturday's race schedule and links to all qualifiers and the live streams.

Reigning champ Seaholm and 2011 champ Grosse Pointe South both graduated star sets of sisters who played big parts in the programs’ successes over the last few seasons – although South does return eighth-place individual finisher Ersula Farrow. Northville, meanwhile, is the favorite returning five from last season’s fifth-place team, and Saline brings back five from the team that finished third including sixth-place Elianna Shwayder. All four of these teams won their Regionals in dominating fashion.

Individuals: Gone are graduated stars Erin Finn of West Bloomfield and Hannah Meier of Grosse Pointe South, along with the rest of the top five from last season. Three more of the top 11 also are back, however: Rochester senior Jessica Goethals, Hudsonville senior Alex Berends and Salem senior Kayla Kavulich. Add into the mix Seaholm junior Audrey Belf, who won her Regional by more than a minute in 17:41, plus Grandville sophomore Valerie Wierenga (17:55.7) and Jenison senior Ellie Leonard (17:58.5) – first and second, respectively, at their Regional.

Rarely does a team lose one of the top runners in MHSAA history (graduate Julia Bos) and come back the next season expected to improve from third place to first. But the Eagles return their second-fourth and sixth-fastest runners from last season’s Final and have been ranked No. 1 all fall.  Spring Lake, with five of its top six back from last season’s runner-up team including 15th-place Carlyn Arteaga, has been figuratively only a step behind. Warren Regina finished ninth last season without a senior scoring, and its top five all are back this weekend including Regional champ and senior Cassie Bloch.

Shepherd often is in the conversation but is the favorite this time as it pursues its first MHSAA team title since 1994. Three of the Bluejays’ top four are back from last season’s ninth-place team including individual seventh-place finisher Kaylie Rhynard, a senior who won her Regional in 18:57.7. She and her teammates could be chasing Macomb Lutheran North junior Gina Patterson, last season’s individual champion as the team finished seventh; total, the top four from that lineup are back this weekend. Benzie Central, the 2011 team champ, also returns its top four from last season’s third-place team including last season’s 10th-place finisher, senior Alyssa Bennett.

Individuals: Only four of last season’s top 25 graduated. Three more sophomores joined Patterson in rounding out the top five last season, and Manistee’s Annie Fuller, Charlevoix’s Amber Way and Holland Black River’s Allison Vroon are all back after placing third-fifth, respectively, as is Ida junior Ashley Sorge, who finished eighth. Way (19:06.4) won her Regional ahead of Fuller and Bennett, and Sorge (18:23.6) and Patterson (18:11) also were Regional champions. Others of note are Clare Freshman Jasmine Harper, a Regional champion in 18:47.4; Kent City senior Ashley Russo, who finished ahead of Vroon in 18:18.62 at their Regional; and Frankenmuth senior Emily Sievert, who also broke 19 minutes in winning hers.

Homer returns its top four and five of last season’s championship seven this weekend. Senior Amanda Reagle was the individual Regional champ in 19:20 and she and now-juniors Jessica Reagle and Bailey Manis all finished among the top 23 at the 2012 Final (when Jessica Reagle placed ninth). Pewamo-Westphalia finished 15th last season, but did so without a senior and brings back five of its top six. Breckenridge didn’t make the Finals as a team when Kirsten Olling was a freshman and have finished seventh and then 10th the last two seasons, respectively. But she leads a team that could push the favorites with its top four and seventh runners from 2012 all back.

Individuals: Only one senior placed among the top 10 last season, and only two placed among the top 20. Olling won her Regional by nearly two minutes in 17:39.8, but 2012 runner-up Holly Bullough also is back and won her Regional title, as did 2012 third-place Tenna Fornari of Waterford Our Lady and sixth-place Lauren Jenkins of Saugatuck. Last season placers Taylor Smith of Blanchard Montabella (fourth), Kendra Colesa of Deckerville (fifth) and Hannah Steffke of Beal City (eighth) also return to the mix.