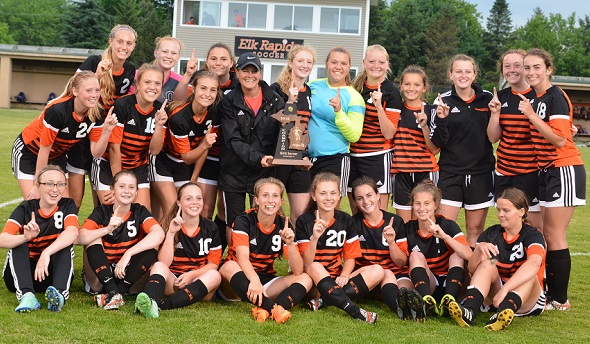 ELK RAPIDS – For the seniors, Elk Rapids’ 8-0 District championship win over Leland on Saturday was overdue.

After losing in the District Finals three consecutive years, the unbeaten Elks broke through in convincing fashion, outscoring their three District foes by a combined 24-1 to advance to Wednesday’s MHSAA Division 4 Regional in Mount Pleasant.

“We knew we had a stronger team this year and that we could do it,” senior forward Carley Patterson said. “We dominated.”

Dominated is the appropriate word as Elk Rapids kicked it up a gear in improving to 21-0. Just a week earlier, the Elks became the first soccer team in school history – boys or girls – to finish the regular season unbeaten. That’s noteworthy, considering the boys won back-to-back Division 4 titles in 1997-98 and finished runner-up in 1989, 1995 and 1996.

Elk Rapids is ranked No. 2 in the coaches’ association poll heading into its Regional opener with Ravenna. If the Elks had any doubters, they’ve been silenced.

“They’re getting their due now,” Suttons Bay coach Tom Spencer said. “I don’t think they got a lot of recognition early. I had my doubts until I saw them play (an 8-0 Elks win in mid-May). They’re the best team we played this season.

“They play solid, sound soccer. They’ve got talent everywhere. Tough backline, great attack and they move the ball all over the field. They all touch the ball and they all come at you – and keep it away from their goal.”

Need proof? The Elks have scored 115 goals and surrendered 11.

“We all work together as a team,” Patterson said. “We’re all really good friends, not just on the field, but off, too.”

It’s made for an enjoyable season for Krakow, now in her 10th year as head coach.

“This is the most talented team I’ve had,” she said. “What I like is that every girl on this team wants to be here playing soccer. Nothing else. When they show up at practice it’s like, ‘What can we do to get better?’

“Even the girls that may not get as much field time are out there supporting the others. They all share a common goal. They want to succeed.”

The Elks have won 19 of their 21 games by two or more goals. And they’ve accomplished that run facing a perennially-tough Lake Michigan Conference schedule, plus a nonleague slate that included games against three teams from the Big North Conference.

One Lake Michigan foe, Harbor Springs, is in the Regional, too. The Elks posted 3-1 and 4-3 victories over the Rams.

“I thought we would have a strong team, adding the incoming freshmen (to the mix),” Krakow said. “We’ve been competitive every year. We just haven’t been at the top.”

In Saturday’s District title win, the Elks limited Leland to one shot. The Comets featured the state’s all-time leading scorer in Libby Munoz.

It was a “revenge” win for Elk Rapids. Leland beat the Elks 2-1 in last year’s District Final. The two teams met earlier this season with Elk Rapids posting a 6-1 win.

“We knew we were the better team coming in, and the score showed it,” Hill said.

The 8-0 decision was the 13th shutout for the Elks, who have given up only 76 shots on goal all season.

The defense includes the Wagner sisters, Alexa and Cailey. Alexa is a senior goalie who is in her second year in the program. A three-sport athlete, she previously played softball in the spring. Cailey, a junior sweeper, is a three-year starter and the “voice” on the back line.

“She directs our defense,” Krakow said.

Freshmen Kendall Brown, Kyla Pryde and Natalie Graf are instrumental, too. Brown and Pryde play on the outside where they can use their quickness to get to the ball. On Saturday, Krakow put Graf at the top of the defense to mark Munoz.

“She normally plays outside mid, but when we have an offensive threat against us we’ll put her in that man-to-man role,” Krakow said. “She’s able to anticipate, deny the ball. We held Libby to no goals twice, so that says a lot about (Graf’s) play.”

Heather Brothers normally plays at the top of the diamond defensively, but the sophomore moved to center midfield Saturday. She’s a two-year starter.

On the attack, the Elks are led by Patterson, the girls program’s all-time leading scorer. She had three goals and an assist Saturday to raise her season totals to 42 goals and 15 assists. For her career, the senior has tallied 106 goals with close to 50 assists.

“She has a nose for the ball,” Krakow said. “She has a great shot and is a good distributor. She plays team ball. She’s very unselfish.”

Hill is the second-leading scorer with 14 goals and 16 assists. Sophomore Nikki Hayes is right behind with 15 goals and 12 assists, although she sprained an ankle Saturday.

In addition, sophomore Clare Klein is a quick, offensive-minded center midfielder, who netted two goals in the District clincher.  Senior Jordan McNamara and Hicking are threats as well.

“When she gets her foot on the ball, it’s like a rocket,” Krakow said of Hicking. “We tease her because she’s never taken a left-footed shot during a game and will always try to put the ball on her right. (Saturday night) she took a left-footed shot and nailed it.”