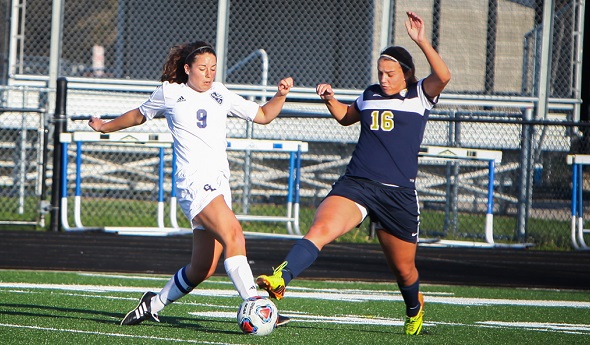 RICHLAND — Military training is not the usual workout for the Richland Gull Lake soccer team.

But that was just one of the girls’ team-building exercises this month to prepare for their run at a fourth consecutive MHSAA Division 2 title.

The players, along with the Portage Northern soccer team, traveled to Fort Custer in Battle Creek where they were put through a rigorous 3½-hour Leadership Reaction Course led by soldiers from the Michigan Army National Guard.

“It was great to see how each team worked together to complete each task as a team.”

Team bonding exercises are a way of making the players a family. That’s one of the keys to the team’s success, said Corstange, now in his fifth season.

If the Blue Devils win a fourth straight title, the seniors will graduate without a season-ending loss. But they insist that’s not their focus.

“It’s not what I need,” said Blue Devils senior goalkeeper Regan Troff, who has committed to play collegiate soccer at Davenport University in Grand Rapids. “We have goals, just like every team.

“Winning a fourth straight title would be awesome … but it’s not something I need to happen to have fun my senior year.”

This was the second year at Fort Custer for the Gull Lake players.

“The coaches divided us into groups with girls we usually aren’t with,” Troff said. “We all worked well together so there wasn’t any fighting.”

On the first of two courses, the girls worked in groups of six or seven, rotating through five stations in a timed exercise, Corstange said.

At each station, they had to move a 50-gallon drum or 40-pound box, along with other equipment such as ropes or boards, over various obstacle courses.

“The second was a land obstacle course which tested individual strength and speed,” he added. “Each athlete completed two courses which ranged from hurdles, rope swings, climbing to balance and speed.”

Gull Lake will give back to the military when the Blue Devils face Portage Northern in Richland on May 9 for a Military Appreciation Night. The 110th Attack Wing Honor Guard will present the colors at halftime, and active and veteran military personnel including those representing American Legion posts, the Michigan Army National Guard, Air Force, Blue Star and Gold Star mothers will be honored.

“We will serve dinner during the varsity game to the military and their families,” Corstange said. “Each team will wear special jerseys along with a military name on the jersey to honor the military.”

But that will be just one way Gull Lake gets involved with the community this spring.

A week ago, the players hosted several Special Olympians for practice and drills. On Friday, prior to Gull Lake’s game with Kalamazoo Central, the Special Olympians warmed up with the team and each player walked out with one of the Blue Devils with her name announced over the public address system.

Gull Lake’s varsity defeated Kalamazoo Central, 8-0, and takes a 5-1 record into this week’s action. The only loss so far was 3-1 to DeWitt, ranked second in Division 2. Gull Lake is ranked fifth.

Many ways to win

Gull Lake’s girls won each of their MHSAA championships in a different way.

Choosing which girls to take penalty kicks does not come by happenstance.

“We do a drill toward the end of practice,” Corstange said. “The girls come up to me and tell me and the assistant coaches where (into the net) they’re going to shoot their PKs.

“One of the reasons we do that is to put pressure on them because if they miss, the entire team has to run. If they tell us where they’re going to place their PK and do put it there most of the time, then we know who are our good PK shooters.”

However, “They are all special,” she said. “I remember every single one.

“I can tell you when people scored, when there was a breakaway, how many corner kicks. I have it all written down. I have the videos.”

Corstange knew the players would have targets on their backs in 2014, and once again scheduled a tough nonconference schedule.

“We took it game by game in the regular season, setting out to win the (Southwestern Michigan Athletic Conference) first before thinking of the postseason,” he said.

Emma Hanna, a freshman on this year’s squad, said the younger players feel some pressure to keep the winning trend alive.

“I’m having a lot of fun. I’m glad for the experience and what happens, happens.”

Hanna, who plays midfield, said the older players help out a lot.

“The older girls give you a lot of advice,” she said. “I like (practicing against senior) Maddie Fouts, and that helps me a lot. 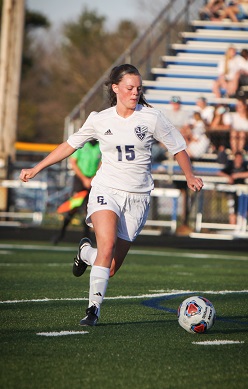 “They talk to you and let you know what you need to do better. You look up to them because they’ve been doing this for four years, and it helps you a lot prepare for the other teams.”

Senior Lauren Nusbaum broke her foot her sophomore year and was team manager. Her junior season, “I sat,” she said. “It was very nerve-wracking (watching the MHSAA Final) but I knew we were in control.

And the last line of defense, Troff, was a forward until high school.

“I wanted to try something new,” she said. “I was athletic enough. I didn’t have the technical skills per se, but because I was so athletic I seem to fit pretty well into it.

“I think playing forward helps me now because I know where they’re going to shoot. I know what I would do so I judge what other people will do.”

“The talent here at Gull Lake, we’ve been gifted with athletes and with (local clubs) Midwest United and Kingdom in the area, for them establishing the girls to where, when they come into the high school season, they are excited about playing,” Corstange said. “We continue to grow soccer players.”