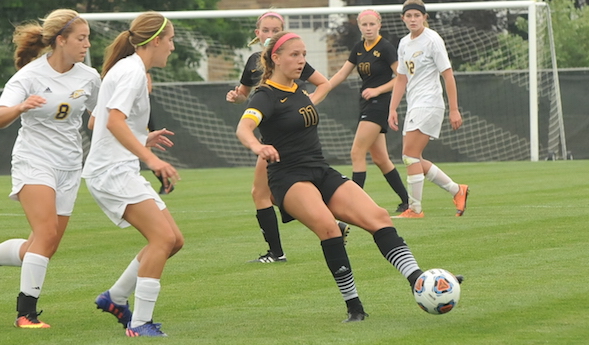 This weekend will feature a first-time scenario in MHSAA girls soccer, and one certainly rare in any sport at any level:

The Division 2, 3 and 4 championships games Friday or Saturday at Williamston High School will be rematches of the same Finals from 2017. Grand Blanc is back in Division 1 and has a rematch ahead as well – against Novi, which followed the Bobcats in league play earlier this spring.

Tickets cost $8. Radio broadcasts of all games can be heard online at MHSAAnetwork.com. All games will be streamed live online at MHSAA.TV and viewable on subscription basis.

KALAMAZOO CHRISTIAN
Record/rank: 18-2-5, No. 3
Coach: Jay Allen, fourth season (91-15-11)
League finish: Tied for first in Southwestern Athletic Conference
Championship history: Four MHSAA titles (most recent 2008), Division 4 runner-up 2017.
Players to watch: Kayla Beebe, jr. F; Lauryn Mohney, soph. M; Elise VanSparrentak, jr. D; Emma Bertrand, jr. M. (Statistics not submitted).
Outlook: Kalamazoo Christian returned to the championship round last season for the first time since winning Division 4 in 2008, and Beebe is back after also helping that team to the season’s final day. She made the all-state first team this spring, while Mohney made the second, VanSparrentak the third and Bertrand and sophomore keeper Jenna Blackwell earned honorable mentions. Kalamazoo Christian was one of the few to score this season on top-ranked North Muskegon, going on to win a Semifinal shootout to advance, and the Comets also beat No. 6 Kalamazoo Hackett during this tournament run.