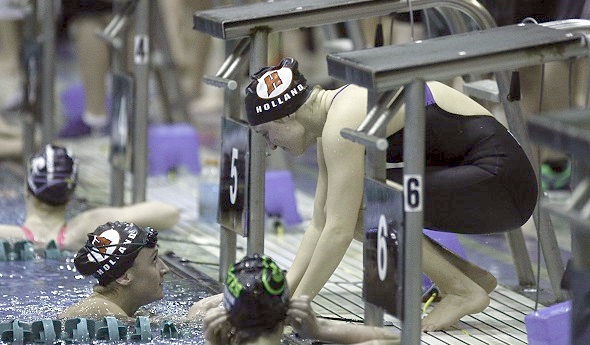 One year after winning four titles (two individual and two relay), Garcia successfully defended all four championships at the Michael H. Jones Natatorium on the campus of Eastern Michigan University.

It definitely was a great performance, too.

Garcia went on to win the 100 butterfly for the third year in a row, breaking her LP Division 2 record with a time of 54.01 seconds – slightly faster than the record-setting 54.39 she swam in 2011.

“That was a fun little add-on,” Garcia said of the record. “It was something that I definitely had in the back of my mind that I wanted to accomplish.”

A few events later, she successfully defended her championship in the 100 backstroke in 52.95 – a second off the LP Division 2 record but faster than her winning time in 2012. The final MHSAA title came in the 400 freestyle relay – the final event of the meet – as Garcia teamed with seniors Holly Morren, Cassie Misiewicz and Emily Johns to finish first in 3 minutes, 27.79 seconds.

It meant a lot to the three seniors to swim that final race – the final race of their high school careers.

“It really sunk in during the 4 by 1(00),” Morren said. “We all kind of looked at each other and said, 'This is our last time,’ and we all started crying a little bit.”

Holland led that race from first splash to final touch.

“This is really a great moment, not only for this group but for all the groups that went before us and the younger girls who will be coming into this program,” said Garcia, who will enter her senior year with 12 individual and relay MHSAA championships and three team titles.

“It was really hard to tell (who finished first), so I just looked at the board really quickly,” Morren said. “I couldn’t tell going into it.”

She said having Pfershy there to push her was a help.

“I think it definitely helps – it pushes you,” she said. “Like when you get tired and there’s not someone there pushing you, you kind of give up. But if there is someone right there, you find another gear.”

Morren also had a runner-up finish as she failed to successfully defend her 2012 title in the 100 freestyle, while Misiewicz was runner-up in the 200 and 500 freestyle events. Morren, Misiewicz, Giesler and Emily Johns also took second for Holland in the 200 freestyle relay.

Mollie Pulte of Bloomfield Hills Marian was the other individual double winner in the meet. Pulte won the 200 in 1:48.37 – a day after breaking the LP Division 2 Finals record with a time of 1:47.90 in the preliminaries. Then, Pulte set another meet record as she won the 100 in 49.87 seconds. The previous record of 49.96 was set by Emily Bos of Holland in 2009.

“It was awesome,” Pulte said. “I came out (Friday) and broke the state record, and I got my momentum going (Saturday) and did the best I can.”

Pulte also swam the anchor leg for Marian as it won the 200 freestyle relay in 1:35.24, again setting a meet record. Maren Taylor, Hannah Richard and freshman Sophia Schott swam the first legs and put Pulte in position to come from behind to win the event.

“They did a good job of keeping us up there, and I just wanted to get out there and race,” Pulte said. “You can normally see the person next to you when you breathe, but I just kept my head down and raced.”

Runner-up Portage Central had one champion in junior Madison Umberger, who won the 200 individual medley in 2:03.79, and Battle Creek Lakeview senior Brooke Rowe won the 100 breaststroke in 1:04.53.

Fraser senior Alli Shereda came from behind to win the diving with 412.10 points. She was in second place after the preliminaries and semifinals on Friday, and she was still second before her final dive – a front two-and-a-half tuck.

“Actually, that dive is one of my worst dives. So I just went at it like I meant it, and I really thought I went over a lot (on the entry),” said Shereda, who finished 10th last year. “I just focused and acted like it was a practice, because I always do my best at practice. I just acted like it was a bigger, fancier practice."

The best finish of the day might have been turned in by Bay City Western junior Krissy Harmon in the 500 freestyle. Harmon trailed Holland’s Misiewicz – the two-time defending champion in the event – by a substantial margin entering the final 50 yards and never grabbed the lead until the final few. She beat Misiewicz in 4:59.42; Misiewicz finished in 4:59.46.

“I didn’t see her until the finish,” Harmon said. “I’ve been working really hard on my back half, so I’m glad it paid off. I didn’t know if I could win; all I wanted to do was break five minutes. That was my goal.”

Misiewicz is one of several seniors who will be missed next year at Holland, and Morren felt it was a special group.

“I just felt like the seniors had a lot more leadership this year, and it was fun to be able to lead a bunch of the younger girls,” Morren said. “We’ve all grown really close, especially in the last two weeks. It’s been a lot of fun getting to know everyone on the team.”

Holland also had a first-year coach in Dan Kimble, the son of former coach Don Kimble, who coached the Holland girls for 10 years. Don Kimble moved on to Byron Center.

“I knew coming into this that there were some pretty big shoes to fill,” Dan Kimble said. “Luckily, I swam for him for a long time, and last year I was able to assist both the boys and the girls teams so I kind of got to see him in a bit of a different light on the deck.

“I feel like I had a decent amount of experience knowing the program and what’s been done in the past, and I just tried to continue it as much as possible.”