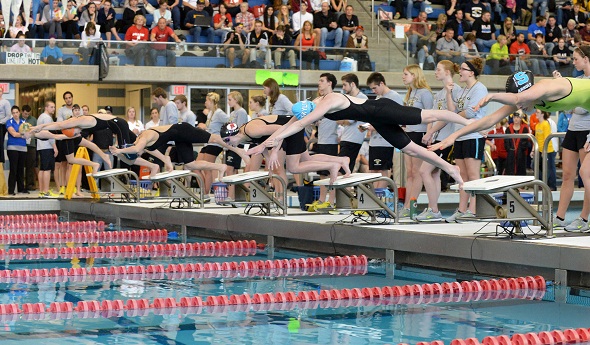 “The girls did a great job,” Dutch coach Don Kimble said. “We had some kids that really swam really well. It’s tough to replace a team like we did last year. We had a great senior class last year, tough shoes to fill. They stepped up. There was a lot of pressure was on them.”

Sophomore Taylor Garcia led the way, winning the 100-yard butterfly and 100 backstroke, as well as competing on the first-place 200 medley and 400 freestyle relays. She was named the Swimmer of the Year by the Michigan Interscholastic Swim Coaches Association.

“I’m glad I had my team here to help me accomplish it,” she said.

Garcia added that it was a great experience for her team to defend its title.

“Especially after last year, it was just an incredible year, and I think to come back and prove that we still have a lot of talent in our program, I think it says a lot about how far we’ve come,” she said.

The addition of new squads, along with some annual powerhouses, made the meet a competitive one.

“This is a faster meet this year than it was last year,” Grosse Pointe South coach Eric Gunderson said. “The cuts were faster to get in, the top 16, and top 8 times across the board were faster.”

“We had a few new teams in our division, which really made things a lot faster this year.”

One of the new additions to Division 2 was this year’s second-place finisher – Ann Arbor Skyline. The Eagles ended up with 255.5 points.

“We’re so proud,” Skyline junior Shannon Cowley said. “We have so many awesome people. I could not be happier.”

Skyline coach Maureen Isaac said her team, which swam at the Division 1 Final last year, performed well in preliminaries and was glad to see it carry over into the finals.

“Yesterday we did what we wanted to do, they were perfect Friday swims, and we also knew we hadn’t scored one point,” Isaac said. “So we had to come back and do it today, and the preparation really fell into place for us.”

Isaac said that the team knew it had a “huge opportunity” to do well this year – which was just the program’s fifth of existence.

“It’s just been an unbelievable experience,” she said of the Eagles’ growth. “You don’t have any baggage, every rule is your own, every expectation for the kids. It is an exceptional situation, and I know part of it is because we got to start from scratch and really build it how we wanted to. And they have completely bought into it.”

Kimble had high praise for Holland’s next closest finisher, impressed by how far they’ve come.

“The addition of Skyline was great,” he said. “That speaks to those kids and the parents and the coaches; everybody’s put in time. That’s a unique situation where they’ve grown, it’s tough to start on the ground floor like that. But very good job.”

“I’ve been working hard all season to get state champion,” Murphy said. “The record is a bonus.”

Murphy said she was looking up the record recently and figured she was capable of doing it, and was excited to accomplish it. Yet things didn’t start out in record-breaking fashion, as she struck the board on one of her early attempts during the finals.

“I got really nervous,” Murphy said.

But she bounced back quickly.

“I had to focus on the next dive,” she said. “Had to brush it off, had to realize I was still in the game.”
The MHSAA title is Murphy’s second Division 2 diving championship. She also won in 2010, but finished second in last fall.

Murphy’s diving coach at Western, Casey Guntzviller, said her concentration and focus was “really impressive” at the finals.

“Something as simple as hitting the board can set you off, but instead she garnered her focus and strength and really finished strong,” he said.

PHOTO: Swimmers take off during a race at the Lower Peninsula Division 2 Final on Saturday at Oakland University. (Click to see more from HighSchoolSportsScene.com.)