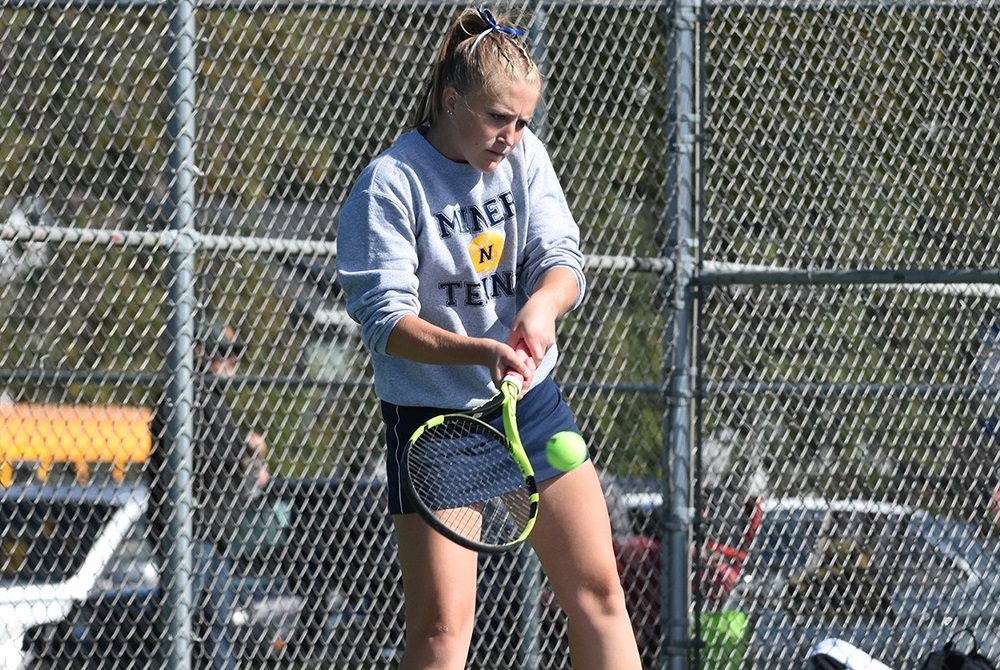 KINGSFORD — Negaunee has been the measuring stick in Upper Peninsula girls tennis for the past decade.

The Miners showed why in earning their seventh U.P. Division 1 title in 10 years Wednesday with 19 points. They were followed by Marquette with 14, Escanaba 11, 2021 champion Ishpeming Westwood with eight, Gladstone three, Menominee one and Kingsford.

“The U.P. Finals always require a gritty effort from all parts of your lineup,” said Negaunee coach Kyle Saari. “Coming into the season we had a lot of uncertainty in our lineup, but the girls answered the bell. This is one of the proudest titles in our program’s history. Our No. 2 and 3 doubles put together an outstanding effort. They went undefeated and didn’t lose a set all season. That’s a remarkable achievement within our program.”

Olivia Lunseth and Sage Juntti defeated Marquette’s Hosanna Brindle and Maija Parkkonen 7-5, 6-1 for the No. 2 title, and sophomores Kallen Schultz and Madelynn Peters took a 6-3, 6-1 decision from Marquette’s Eliina Brazeau and Nistha Gautum in No. 3. 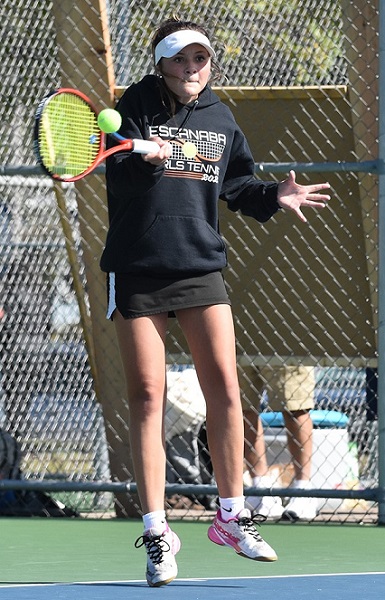 “I think everything went pretty well,” said Schultz, who won at No. 4 doubles a year ago. “We worked pretty well together and talked a lot on the court. It was chilly this morning, but we had good conditions this afternoon. I prefer to play at a fast pace and tried to place the ball more.”

This marked the first championship for Peters, who also enjoyed the milder conditions.

“Working with the weather conditions became a little easier as the day progressed,” she said.

“I was in and out of the varsity lineup last year. This was definitely different. It took a lot of hard work to get to this point. This will be a motivator for next year.”

Miners’ freshman Rheana Nelson topped Marquette’s Cecilia Jacuzzo 6-2, 6-1 for the No. 3 singles championship, and classmate Lilliana Saunders overcame a 5-2 deficit and other adversity late in the second set of a 6-2, 7-5 (7-6) triumph over Westwood’s Samantha Ruby at No. 4.

“This feels really good, but I had real bad cramping in my leg.” said Saunders. “I didn’t really know where we were in the standings. I felt I had to win for our team to win. After she went up 6-5, I just took it one point at a time. It feels great to win as a team.”

“I kept my focus throughout the season,” she added. “I approached this as just another match, and it kept me a little more calm. This is a good start to my high school career.”

Lyndsey Lake and Lexi Hammerstrom provided Marquette with its lone title in a 6-4, 6-2 defeat of Negaunee’s Paityn Brunette and Autumn Ring.

“I knew where to place the ball and had my family here to watch,” said Derkos, who reached the No. 1 semifinals a year ago. “I worked on my game a lot more this year. I also worked on shots I didn’t have last year. It was real cold for the first match, then it warmed up and my muscles worked better this afternoon.”

Escanaba senior Delaney McIntyre and junior Natalie Williams enjoyed their moment in the winner’s circle following a 6-0, 1-6, 6-1 triumph over Negaunee’s Stella Harris and Madison Frustaglio at No. 1 doubles. 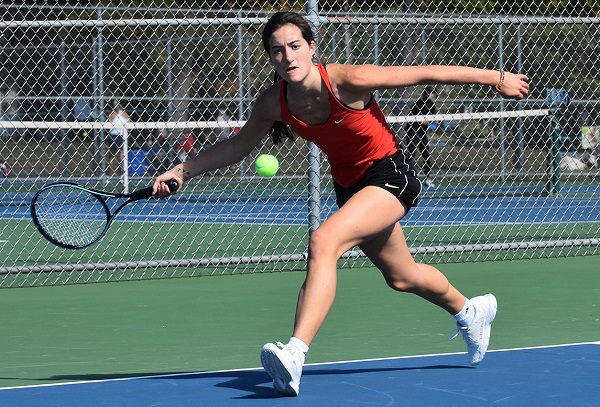 A key moment for the Eskymos duo took place in the finale when Williams converted on a groundstroke to make it 4-1.

"That was a big play,” she said. “That was also a momentum builder. They’re good players. They didn’t give up.”

This was the first U.P. championship for McIntyre.

“This is really special,” she said. “I thought our team did well. We’ve gone back and forth with Marquette and Westwood all year.”

An overhead shot helped Schone gain a 3-1 lead in the second set. Johnson then changed her strategy, electing to lob the ball over the net which at one point helped her come within 4-2.

“An Iron Mountain girl did that in a match (at Gladstone) two weeks ago,” said Schone, who made the semifinals at No. 3 singles last year. “It didn’t catch me off guard. It helped to see that before. I’m definitely a faster-pace player, but I needed that practice. I just had to be patient and kind of wait for her to make a mistake. This is definitely a big step after taking fourth last year. I knew what to expect this time.”