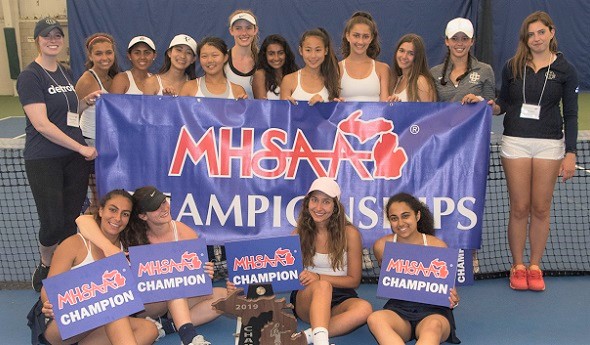 NOVI – For a squad that had won the previous three championships and was ranked No. 1 in the state, there was still understandably a lot of nervousness within the Detroit Country Day girls tennis team going into the final day of the MHSAA Lower Peninsula Division 3 Finals.

Country Day entered the day trailing rival Bloomfield Hills Cranbrook Kingwood by a point, and that actually was a deficit that provided a bit of relief among the Yellowjackets.

“Before Cranbrook’s No. 4 doubles team lost, we were down four points to them and they weren’t supposed to lose that quarterfinal match,” said assistant coach Jane Ziecik, the acting head coach for the second day of competition. “Being down four points to Cranbrook is way different than down one.”

But while there were feelings of nervousness for Country Day, it didn’t translate into its play on the last day.

Country Day showed its championship mettle, rising up by winning six of the eight flights and claiming its fourth straight Finals title with 33 points, good enough to outlast runner-up Cranbrook’s total of 26.

“It was definitely more nerve-wracking than what our girls are used to,” Ziecik said. “They are used to not having to worry as hard.”

Leading the way was senior Monique Karoub, who ended her high school career by winning her fourth individual Finals title to complement being part of four team champions.

“I definitely was confident, but every year I get super nervous,” Karoub said. “It’s never a guarantee at all. It’s just the best feeling to be able to come out on top like this. Especially as a team, too. That’s the best.” 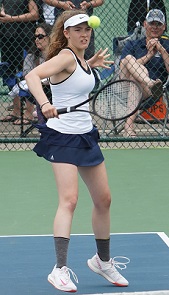 This was a season of transition once again for Karoub, who won last season at No. 2 singles when Country Day had a highly-touted then-freshman, Julia Fleigner, win at No. 1.

Fleigner decided not to play high school this year, and Karoub returned to No. 1 singles, a flight she won as a sophomore in 2017.

Karoub also won the title at No. 2 singles as a freshman.

“It was a difficult transition,” Karoub said. “But I was able to be successful with it. We had a quad in Allegan, and it was our first quad of the season. I had a really close three-set match, and it just emphasized how difficult No. 1 can be and how good the girls are.”

Karoub is moving on to attend college at Michigan State. She said she is undecided on whether she will play tennis.

Other flight champions for Country Day were Elle Hartje at No. 2 singles, Alexis Nardicchio at No. 3 singles, the team of Tara Rahmani and Nina Khaghany at No. 1 doubles, the tandem of Ruhe Wayak and Lana Haddad at No. 2 doubles and the team of Maria Sicilia and Rachel Jeong at No. 3 doubles.

Cranbrook, which won five team Division 3 championships in a row from 2011-15, finished runner-up for the second straight year.

Charlotte Brown won the title at No. 4 singles for Cranbrook.

“Country Day is a really strong team, and we’ve been chasing them all year,” Cranbrook head coach Grant Asher said. “We feel like we have been getting closer and closer, and I think that was evident after day one. But they’re a really strong and deep team. I was really proud of our girls in a sense that they put themselves in a position to put some pressure on them. Unfortunately, Country Day elevated their game at the end.”

The only flight that didn’t have a champion from Country Day or Cranbrook was No. 4 doubles, where Grand Rapids Christian’s team of Grace Maurer and Calista Bremer, seeded sixth, won the title.