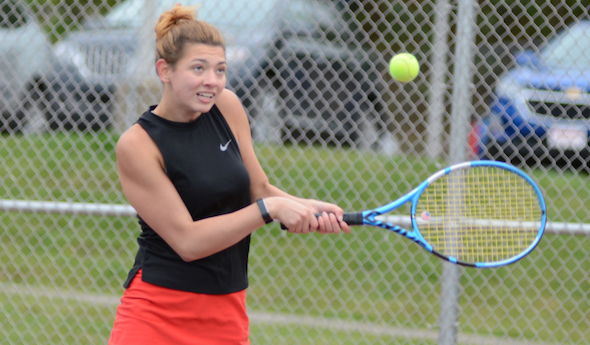 By Ryan Spitza
Special for Second Half

NEGAUNEE — All good things must come to an end.

After a five-year run as Upper Peninsula Division 1 champion, the Negaunee girls tennis team was dethroned by Marquette on Wednesday at the MHSAA Final played at the Negaunee Tennis Complex.

The Redettes claimed the team title for the first time since 2005, earning 17 points to the Miners' 10. Menominee was third with seven points, while Kingsford and Escanaba each had six and Gladstone three.

Marquette advanced to six out of eight flight finals, including all four singles matches, while the Miners advanced to three. The Maroons also competed in three flights, while the Flivvers made it to two flights and the Braves and Eskymos each to one.

It was a long time coming for Marquette, and head coach Derek Sandstrom has seen many athletes come through the program over the years who came up just a little bit short.

"It's been a while; it's been a long time," he said. "We've had a lot of great girls along the way who didn't get to this point, but I don't want to belittle them at all. We've had some great tennis players and great kids come through this program. This group is just the one that brought home a trophy."

Marquette had two losses in duals all season, both to the Miners. Those meetings were close though, and Sandstrom knew that things could've gone either way Wednesday.

“A couple of bounces here and there is all it takes,” Sandstrom said. “We played tough with Negaunee during the regular season. I told the girls, the last meet we played them, they won the match score but if you look at the actual scorecard, each team won 10. We were there, we just had to do something to get over the hump. Individually, some of the girls found their way."

Piercing cold weather in the 40s throughout the day didn't affect Olivier, who topped Nolde in two sets again, this time 6-0, 6-2.

"I actually prefer playing in the cold rather than the sun," Olivier said. "I don't really like serving into the sun. I don't think (cold) really affects you at all. You just need to conserve your energy." 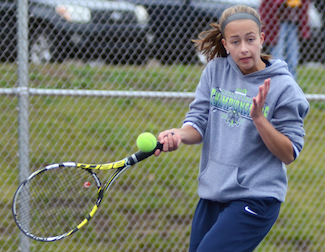 Olivier will look to join her older brother Alec as part of the Ferris State University tennis programs next season.

The Redettes' other singles win came in the No. 2 flight, with fellow senior Mollie Kilpela topping Menominee's Josie Hofer in two sets, 7-6, 7-6.

Marquette also claimed Nos. 3 and 4 doubles, with the team of Zoey Brian and Ruth Hummell topping Escanaba’s Maddy Michica and Gracie Wickham 6-4, 6-4 in the third flight, while Julianna Golisek and Alyson LaBelle defeated Kingsford's Liz Penegor and Jenna Olkkonen 6-0, 6-0 at No. 4.

Sandstrom was pleased with his team's performance, and said this is only a small chapter in their lives ahead.

"The girls played well," he said. "We had some ups and downs throughout the year. Elysa and Mollie, they were the runner of the ship and we just followed their lead. We finally kept up with them all the way to the end of the year.

"I'm really proud of the girls. It's just a really cool group of kids. None of them are peaking at high school. They're all going to go on to bigger and better things, and this is something they'll remember when they come back for their 10-year class reunion and stuff like that. I'm proud of the way they came together as a team, and they all genuinely love each other. That's the cool part."

It was the end of a half-decade run for Negaunee, but the Miners still had a strong day winning three championship matches.

Miners coach Kyle Saari said it was a year of exciting challenges for his team, and he was proud of the way his players battled throughout a season of learning.

"Each and every year is fun," he said. "As you come into it, each and every year presents a little different and unique challenge. I was very pleased with the way we ended up going through the regular season with a team that was kind of learning on the go and learning as we kind of transitioned. I'm proud of our girls in that regard.

"What happens sometimes when you enter those tournament situations at the end of the year, sometimes that becomes the time where girls don't really know what to expect. A lot of girls will return next year. I think they've learned a lot from the conference and U.P. tournaments in terms of preparation and how to handle a match day and things like that. That'll be good for us moving forward."

Saari credited his three individual champions as well as the Redettes for putting out strong finals performances.

"At No. 1, Morgan and Katelyn have been super consistent all year long. They're good friends, they're both good athletes and their games have complemented each other well,” he said. “They've been good leaders for our team as a whole and the way that they practice, the way that they support the other girls, it's good to see them rewarded.

"Looking at the performance as a whole, the key for anybody is always getting flights through to the finals. Marquette had a tremendous day. They played well throughout their lineup and put six in the finals. We had three. We were able to win all three, but to win a U.P. Final, your depth really has to carry you. Some days it does, and some it doesn't."

The only final that didn't go to the Miners or Redettes was No. 4 singles, which saw Kingsford's Lizzy Cross defeat Marquette's Haddie Ketzenberger 6-3, 6-2.

PHOTOS: (Top) Marquette's Elysa Olivier returns a volley during a No. 1 singles match Wednesday. (Middle) Negaunee's Jillian Skewis sends the ball back while playing No. 2 singles (Photos by Amy Grigas).