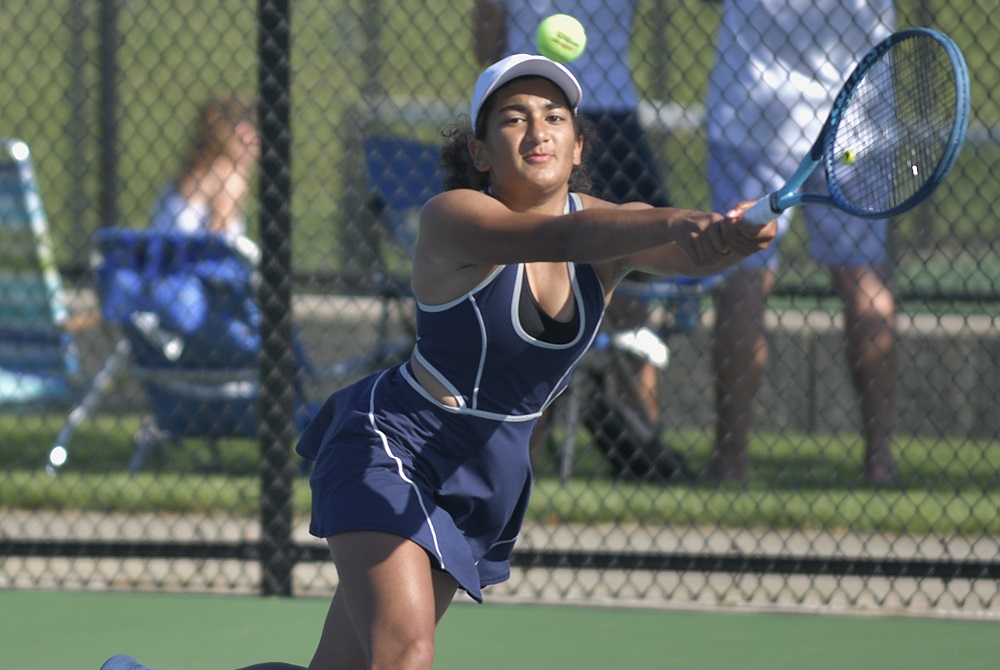 “We came in as a major underdog,” said Yellowjackets coach Jessica Stencel. “We went through a lot of adversity to win this championship. We lost to Cranbrook 7-1 in a dual this season, we lost at the Regional, and we’ve had kids out of the lineup due to injuries and COVID.

“But these kids have practiced hard, and they are super close as a team.”

Country Day needed every player to come through, and the total team effort was the difference in holding off second-place Bloomfield Hills Cranbrook Kingswood. Hours upon hours of practice throughout the season paid off in a big way for the Yellowjackets.

Along with a team loaded with hard workers, Country Day also relied on one of the premier singles players in the state. Senior Julia Fliegner, who will be playing her collegiate tennis at the University of Michigan, won the No. 1 singles championship. 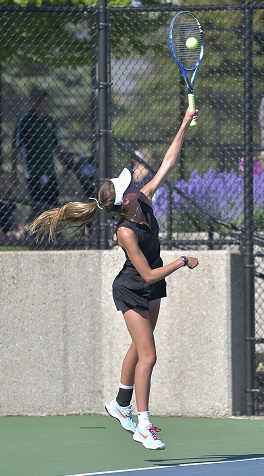 For Fliegner, the state title was her second in as many trips to the Finals with her first coming during her freshman year. As a sophomore, Fliegner did not play high school tennis, and COVID-19 led to the cancellation of last season.

“Winning the singles title feels pretty good,” Fliegner said, “but I wanted to win the title as a team very badly. I just wanted to do my part for the team and be a leader. I was in a position this year to be a team leader, and I was happy to be able to help lead.”

Junior Charlotte Brown led the way for second-place Cranbrook Kingswood. She won her second individual Finals championship, claiming the title at No. 2 singles.

“This is really special,” Brown said. “I was really nervous, but the match went really well. The wind was very difficult out there, but once I figured that out things went good.”

For the Chelsea tennis team, the number three proved to be the lucky number of the weekend. Not only did Chelsea finish in a program-best third place, but the Bulldogs crowned the first three individual Finals champions in team history.

“This tournament was unbelievable,” said Chelsea coach Tom Osbeck. “The highest we’ve finished before in school history was seventh place. We never had a player reach the finals before, and this year we not only had finalists in three flights but we had three state champions.”

Freshman Anne-Marie Begola claimed the first individual title for the Bulldogs as she won at No. 4 singles.

“This feels amazing,” Begola said. “I was really happy to just make it to states. To win the state championship is an incredible feeling.

“This feels very special. We broke a lot of records as a team, and this was a very special occasion.”

Soon after Begola won her title, Chelsea’s No. 4 doubles team of Megan Boughton and Meghan Bareis won another.

“They are good friends and good teammates,” Osbeck said. “They are just amazing together as a team. They hung in there the whole match against a really good Cranbrook team.” 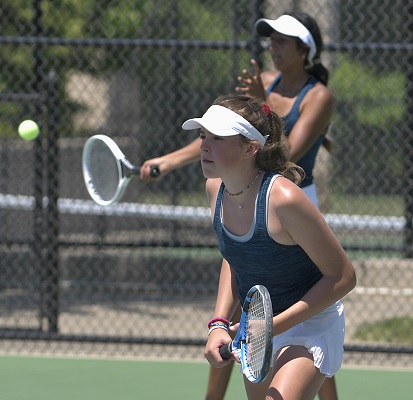 Topping off the day for Chelsea was a surprising effort from senior Rachel Bareis. Unseeded at No. 3 singles, Bareis completed a memorable weekend by winning the flight championship.

“I just gave it everything I had,” Bareis said. “It was the last match of my high school career, and just getting to the Finals was amazing. I relied on my teammates to pull me through. I felt their energy knowing they were all there supporting me. They gave me the energy to push through.”

At No. 1 doubles, the Grand Rapids Christian senior duo of Dafna Heule and Grace Poortenga was another flight champion that surpassed its seed, after entering the weekend third in the bracket.

“Four years of high school tennis all built up to this,” said Heule. “To even get this far as a senior is really special.”

“At a single-elimination tournament like this, most players end their season with a loss,” Poortenga added. “To win your final match is so special. We figured out as partners how to pick each other up.”

Detroit Country Day's Aryasai Radhakrishnan and Marin Norlander also made an impressive run above their seed, claiming the championship at No. 2 doubles despite entering seeded fifth in the flight. No. 3 doubles Alyssa Rahmani and Emily Weinmann succeeded similarly for the Yellowjackets, claiming a championship from the third seed line.