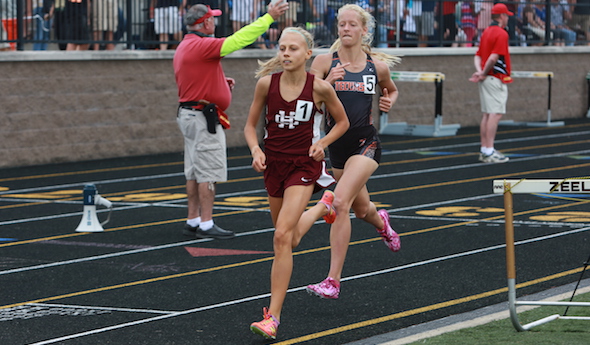 ZEELAND – It hasn’t been easy at Holland Christian this school year. Certainly not as easy as Kayla Windemuller made it look on the track Saturday.

Windemuller pulled off a rare triple as the junior defended her titles in the 1,600 and 3,200-meter runs and ran anchor on the winning 3,200 relay (9:09.41) at the Lower Peninsula Division 2 Track & Field Finals at Zeeland.

Five people associated with Holland Christian schools died this school year. One was a 13-year-old girl and two were teachers, and it’s something Windemuller and everyone associated with the schools can’t forget.

“It’s tough at the school,” Windemuller said. “In some meets during the season it’s tough to run. When I run in those I think of them. They inspire me. I run for them.”

“I was concerned about the heat, but it didn’t affect me too much,” she said. “It’s amazing to defend my title(s). I really like (running) the two mile. I’m more of a distance girl.

‘My goal was to get under 10:40. At the start I felt pretty good. That’s OK. I ran a PR in the mile. It is a long day, but it’s nice to have the meet spaced out. We run the relay in the morning, and then the races get slower as the day goes on. The day, overall, was awesome. I’m not happy with the times. The three state titles are sweet.”

Waverly had no individual winners, but did place first in two relays (400 and 800) to win with 47 points. Zeeland East was second with 46, and Holland Christian was third with 34.

Here’s how some of the drama played out.

Due to injuries Waverly coach Rex Wilkes, Jr., had to shuffle his lineup on the relays. The Warriors had the fastest time in the division in the 1,600 relay entering the Finals, but Wilkes made the decision not to compete in the event while attempting to save his top runners for other races.

It worked, but just barely.

“I knew we could score around 50 (points),” he said. “I just didn’t know what the other teams would do. We got some extra points in the shot. We got 10 there. And then I was told that Priscilla (Trainor) had to finish third or higher in the 200 for us to win.”

Trainor finished third. That’s not all. Suenomi Norinh of Zeeland East finished tied for first in the 100 hurdles with times measured out to hundredths of a second; to break the tie, it was determined she finished second by two thousandths of a second.

Norinh, a junior, did take first in the high jump (5-foot-8) and was second in the long jump.

Liz Pyles of Cadillac placed third in both the discus and shot put last season as a junior, and she took that experience to place first in the shot with a put of 45 feet, 4 inches, a personal best, and won the discus with a throw of 146-3.

“Last year was something to build upon. I worked with my coach. I worked in the weight room. I went to a bunch of camps. I’m real serious about this.”

Pyles signed with Grand Valley State University and expects to compete in both events. She qualified for the MHSAA Finals in the shot put all four seasons and the discus three times. Even so, she doesn’t have a favorite.

“It depends on the season,” she said.

Zoe Eby of Carleton Airport is a notorious slow starter. And when you’re competing in the 100 dash, that usually doesn’t bode well.

Eby got off to a poor start again but managed to come back to win the race with a time of 12.11.

“The last 30 meters was really close,” she said. “When I got off to that start I thought I would (finish) in the middle of the pack. I honestly don’t know how I did it.”

Eby, a junior, also defended her title in the 200. As a freshman she won the 400. She doesn’t compete in that event anymore.

Jakarri Alven of Grand Rapids Catholic Central wasn’t at her best Saturday. She said she had to pull out of the 200 because she was feeling ill.

Waiting for the other competitors to complete their jumps in the long jump was getting to Taylor Dziatczak of Macomb Lutheran North. Dziatczak had used up her tries and stood in first place with a jump of 17 feet, 11½ inches.

“It was a nail-biter,” she said. “A couple of girls who were close had a couple more jumps left. The girl from Zeeland East (Norinh) had three more left. I had to go to some deep breathing to stay calm.”

Dziatczak, who placed second last year, did hold on for first.

The long jump isn’t her best event, and it’s really not second as far as favorites. The javelin is tops with her. Dziatczak is a two-time AAU All-American in the javelin and has signed with Ashland University in Ohio to compete in the heptathlon. That’s seven events, in case you’re wondering. She placed in the javelin as a sophomore nationally in her age group and was third this year. Dziatczak, who is 17 years old, pointed out she moved up to the 18-and-under age group this year.

She just started competing in the heptathlon two years ago.

“I ran. I jumped. I figured why not do all of the others?” she said.

LeRoux's best this season heading into the meet was 12-0. A junior, she also won the pole vault championship in 2016 and was second in 2015 to her older sister Allie.

PHOTO: Holland Christian's Kayla Windemuller stays a pace ahead of Tecumseh's Christina Sawyer during one of their two races against each other Saturday. (Photo by Janina Pollatz/RunMichigan.com.)