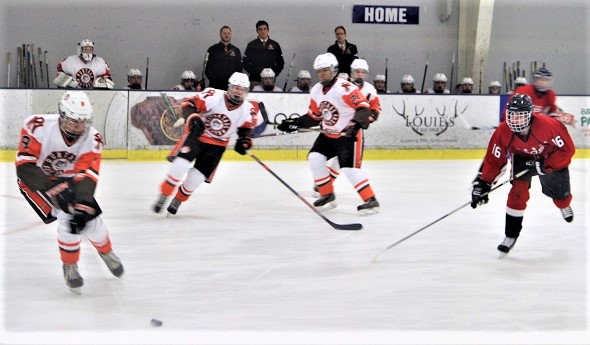 Two struggling hockey leagues found a perfect match, thanks to the behind-the-scenes work of commissioners, athletic directors and coaches.

The Southwest Michigan High School Hockey League was down to five.

Merging the two leagues was a no-brainer for all involved.

“We learned (the CAAC) was a small league like us,” Portage Northern athletic director Chris Riker said. “It’s tough to have a league with just five teams. By putting our two leagues together, and we had already played a lot of those teams, it just made a lot of sense.”

The new 10-team league, called the South Central High School Hockey League, is bringing a new excitement to both areas and came together very smoothly in less than a year.

“I’m tickled pink, and I give high marks to the coaches and athletic directors.”

The league is divided into the Central and South divisions, with five teams in each.

Most teams in the league are co-op teams with Jackson Lumen Christi in the Central and Mattawan, Portage Central and Portage Northern in the South the only teams made up of students from one school. 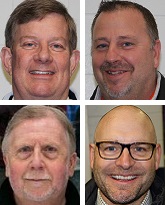 The first big showcase event featuring all 10 teams is set for Friday and Saturday at Wings West in Kalamazoo.

Riker said the new league “creates some excitement the way we structured the season with playing in your division and playing crossover games.

“We’re going to have a big championship game where the two No. 1 teams play each other, the second-place teams meet and so on (Feb. 22 at Wings West).”

There are other benefits as well, Noonan said.

“The best thing for hockey in the area is they have set opponents they’re going to play every year and, for the kids who earn (end-of-season) awards, it means more,” he said.

“There are 10 teams competing for the awards rather than our typical six-team old division, so it’s more prestigious, more of an honor to win an award in the new league.”

MHSAA Assistant Director Cody Inglis, who took over administration of hockey for the Association when Allen retired in 2014, put Riker – a member of the MHSAA’s Representative Council – in touch with Allen. The two jump-started talks last March.

One key was getting the Eagles to become a school-based team rather than a club one.

“Karyn Furlong (Gull Lake athletic director) was willing to jump on and sponsor the Eagles,” Riker said. “She did all the leg work in getting the schools on board.

“The Eagles organization also deserves a lot of recognition for saying, hey, we’ve been in this club status and now we’re willing to come in and be a school sport.

“Now they have the opportunity to play in the state tournament, which they’ve never had.”

The MHSAA Semifinals and Finals are set for March 12-14 at USA Hockey Arena in Plymouth.

Allen, who went on to serve as commissioner of the CAAC until retiring at the start of this school year, first floated the idea of merging the two leagues to coaches from his conference. 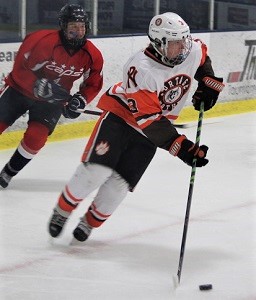 “At the athletic directors conference (in March 2019), we kept inching closer to forming a new league. We did not hear one word of objection through the entire process. We had 110-percent backing.

“After everybody covered all the bases, we made it final and came up with the official name.”

Allen said the new league has “great leadership from the athletic directors and (Noonan), who took the lead on everything.”

He added that one perk of the new league is getting officials together. “Now we get officials to be part of one overall group, and there is a possibility of mentoring,” Allen added.

“It’s great to get some more natural rivals,” he said. “Our league got to be so small we played a lot of other (non-league) teams or showcase games.

“When more games have meaning or some substance to them, you can see kids growing and there are some natural rivalries that it creates, so it’s exciting.”

Travel is not a problem, Van Tighem added.

“For us in Mid-Michigan, it you go outside the Lansing area, it’s going to be an hour anyway. So coming to Kalamazoo, it’s an hour 20 or hour 15, but if we go anywhere else, except for Jackson, it’s going to be at least an hour,” he said.

“Athletic directors and coaches got together, and it really came together nicely. It’s been great so far.” 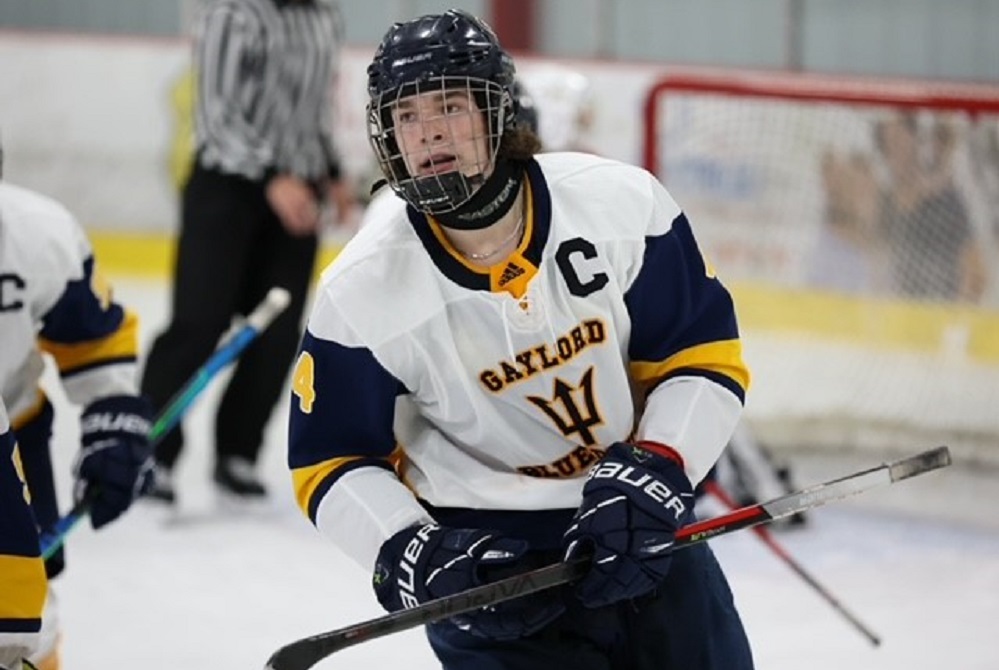 When Gage Looker went down with an ACL injury in Gaylord’s first football game this fall, Liz Harding – president of the Blue Devils’ hockey boosters – was absolutely devastated.

Looker, an all-conference hockey defenseman last winter, was playing, as a senior, in his first-ever varsity football game. Harding, also Looker’s mom, was there.

“I caught the one and only picture of him playing football just before he injured himself,” Harding recalled. “I was devastated!”

Doctors indicated surgery was necessary and recovery would prevent Looker from getting back on the ice, the football field and the track where Looker had dreams of great success this year.

“Knowing hockey is his passion — and thoughts of him not playing did not set well with me — Gage started what I would call standard physical therapy a couple days after surgery and then added an additional blood flow therapy with our local trainer to his weekly routine,” Harding said. “Through his hard work and determination, he is back on the ice.”

The Blue Devils, after graduating their other four all-conference players from last winter, were 2-11 this year when Looker returned to the ice against Big North Conference rival Petoskey. Gaylord has won three of seven since.

Gaylord coach Jamie Voss believes Looker’s return was pretty much a miracle. And he thinks Looker is playing at about 80 percent despite being only a few months removed from the injury.

“Gage tore his ACL and was told by doctors his sports life was over,” Voss said. “Gage would not accept this, and he trained harder than any kid I have ever witnessed to prove the doctors wrong.”

“The reports on his progress and rehab were literally off the charts for this type of injury,” Voss said.  “His doctors reported early that they have never seen this occur before regarding the strength developments in the afflicted areas that support his ACL tear.”

Voss admitted he had to hold his breath a little – as many Gaylord supporters did – when Looker joined the starting lineup against Petoskey. That moment came after just a week on the ice, including full contact practices. 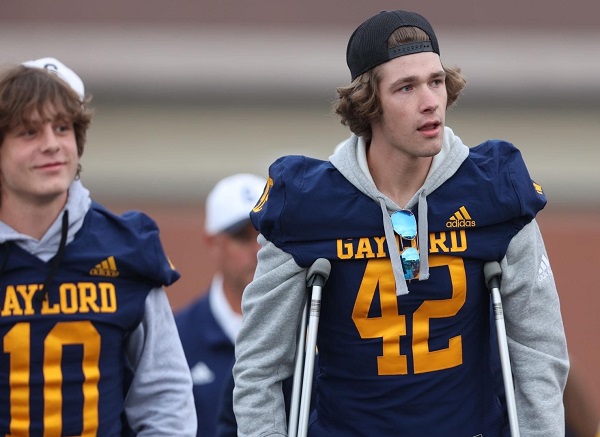 “More important than records to Gage was his commitment and obligation to be our team leader as our compete level was predictably down this season,” Voss said. “Gage is one of the best athletes and citizens that I have ever been allowed to coach.

“He is not only a leader to the players on and off the ice, but Gage also is the kind of kid that coaches learn from,” Voss went on. “He is mature beyond his years.”

Looker, who started playing hockey at 4 years old, dabbled with football as a freshman although an eighth-grade hip injury kept him away from the field until this fall. Looker’s size – 6-foot-3, 245 pounds – led to many encouragements to give football another try.

“I went the rest of my high school career being told that I needed to play football,” Looker said. “So I said ‘why not’ my senior year because I could use the extra strength for hockey.”

Looker was told he literally “blew apart” his ACL.

“My stomach dropped,” Looker said. “I was not ready for that at all.

“I was shown what my PCL looked like and then went to where my ACL should be, and it was gone — some say it was deleted,” Looker continued. “I was told I will not be able to play sports for about seven to nine months, and I was speechless.”

Two months after surgery and extensive physical therapy, Looker tried to skate. It went so well he began to entertain thoughts of playing hockey again. He may aspire to compete in track & field this spring.

“He runs a 56-second quarter mile and throws the shot put 48 feet, 10 inches,” Voss said of his dominating defender. “And although he is restricted from running, something tells me this kid will run track this spring.”

While it is not the senior hockey season it could have been without the injury, many are glad to just have Looker on the ice. His mom is among them. 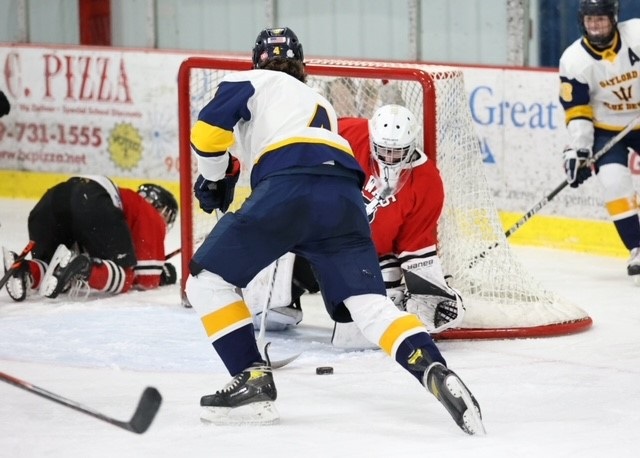 “I am overjoyed to have him back on the ice,” Harding said. “At least he is getting in a few games and is out there making a difference.

“The smile on his face is priceless,” she continued. “Perhaps he'll continue with track as he is set to break records there too.”

Rehab fresh out of surgery was “very boring,” so Looker started intensifying his recovery with therapy four days a week for a few months.

“It was a lot of commitment, but I needed my senior year of hockey,” Looker said. “I was doing the basic things, and then I had a machine that could stimulate my muscles and pump blood to my knee.

“It is called ARPneuro,” he continued. “I was skating with that on my leg as well as doing mini workouts at home.”

ARP — accelerated, recovery and performance — reportedly accelerates recovery time by decreasing chronic pain and increasing range of motion without the use of medications.

“I was always putting as much work in as I could,” Looker said. “It definitely paid off in the end.”

“I have never heard of this, nor witnessed it,” Voss said. “Gage Looker is an anomaly, and in my opinion a different type of tough.

“Gage returned to practice full contact three months after he tore his ACL,” Voss continued. “And he played his first hockey game logging 30 of 51 minutes a week later.”

Looker credits the support and effort of his medical team and his teammates for helping him get back on track. However, no one gets more credit that the booster president.

“My mom and teammates helped me through it,” he said. “My mom was always on me about doing my workouts and keeping me disciplined.”

PHOTOS (Top) Gaylord’s Gage Looker has returned to the ice this season only a few months after a serious knee injury. (Middle) Looker, right, watches his football teammates from the sideline this fall. (Below) Looker tries to stuff the puck past Tawas’ goaltender. (Photos by Rob DeForge/RD Sports Photo.)