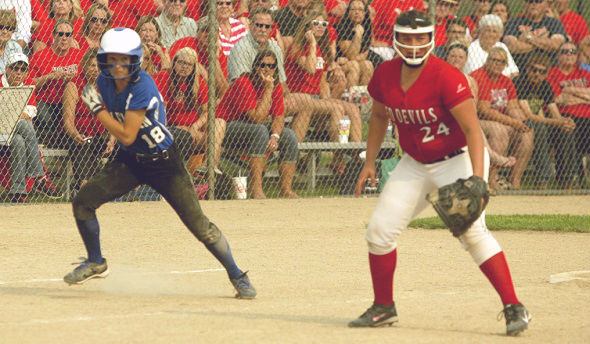 Most teams journeying to Secchia Stadium at Michigan State University this weekend will be doing so for the first time, as this is only the second season MSU has hosted MHSAA Softball Finals weekend.

But for Caledonia, Carleton Airport, St. Clair and Montague, the trip will be a little more special – all four will be playing in an MHSAA Semifinal for the first time in their histories.

Tickets cost $8 per round and include admission to baseball and girls soccer games that day also at MSU’s Old College Field. Radio broadcasts of all games can be heard online at MHSAAnetwork.com. All games will be streamed live online at MHSAA.TV and viewable on subscription basis.

FARMINGTON HILLS MERCY
Record/rank: 27-3, No. 5
Coach: Alec Lesko, first season (27-3)
League finish: First in Detroit Catholic League Central.
Championship history: Division 1 runner-up 2002.
Players to watch: Abby Krzywiecki, jr. 1B/P (.594, 12 HR, 56 RBI, 10-1 pitching, 2.98 ERA); Alex Sobczak, sr. C (.436, 55 R, 6 HR, 33 RBI, 11 SB); Sophia VanAcker, soph. LF (.545, 32 R, 26 RBI, 11 SB);
Outlook: Mercy won its first Regional title since 2007 with a team that should have an opportunity at multiple trips to Finals weekend. Sobczak was an all-state first-teamer last season but is one of only two seniors who start and three total on the team. Krzywiecki earned all-state honorable mention last season and will finish this one with multiple entries in the MHSAA records for her offensive prowess. She provides another strong arm to ace junior Andrea Elmore, who came into the week 15-2 with a 1.44 ERA and 143 strikeouts in just under 112 innings pitched.

WARREN REGINA
Record/rank: 25-16, honorable mention
Coach: Diane Laffey, 45th season (1,116-439-3)
League finish: Third in Detroit Catholic League Central.
Championship history: Five MHSAA titles (most recent 2007).
Players to watch: Gina Munson, sr. C/3B (.333, 31 RBI); Marissa Tiano, sr. P/DP (.403, 13 2B, 25 RBI); Riley Hison, sr. 2B (.431, 37 R, 22 RBI).
Outlook: Regina won its 19th straight District title this spring, but is back at the Finals for the first time since finishing a run of four straight MHSAA titles from 2004-07. Laffey is the winningest coach in Michigan softball history, predating the start of the MHSAA tournament by more than a decade. Regina may have more losses than anyone left in Division 1, but it also has handed Mercy its only three losses this season. Munson earned an all-state honorable mention in 2014 and catches Tiano and junior Nicole Roeske, who was 10-6 with a 2.84 ERA entering the week.

ST. CLAIR
Record/rank: 23-12, unranked
Coach: Kevin Mahn, ninth season (196-93-1)
League finish: Third in Macomb Area Conference Red.
Championship history: Has never played in an MHSAA Final.
Players to watch: Chelsea Schweiger, sr. CF (.500, 41 R, 15 SB); Hannah Gomola, sr. P (.453, 32 R, 10 2B, 30 RBI); Avary Humes, sr. SS (.408, 12 2B, 32 R).
Outlook: St. Clair made Quarterfinals in 2012 and 2013 and won a District title last season before breaking through this spring for its first Semifinal berth. The Saints eliminated No. 7 Croswell-Lexington in the Regional Final and have outscored its five tournament opponents by a combined 51-14. Schweiger earned an all-state honorable mention last season and is one of five senior starters. Another, Miranda Greig, hits .367 and was 8-5 pitching with a 2.63 ERA heading into this week.

MONROE ST. MARY CATHOLIC CENTRAL
Record/rank: 35-5, No. 1
Coach: John Morningstar, first season (35-5)
League finish: Tied for first in Huron League.
Championship history: Three runner-up finishes (most recent 2007).
Players to watch: Meghan Beaubien, soph. P; Ellie Cepo, sr. C. (Statistics not submitted.)
Outlook: St. Mary won its first league title since 2008 and first District and Regional titles since that last runner-up season of 2007. The Kestrels eliminated No. 3 Napoleon in the Quarterfinal, and two of its losses were to teams playing in semifinals in bigger-school divisions (Airport and Mercy). They haven’t given up a run in five MHSAA tournament victories. Beaubien made the all-state first team last season as a freshman.

HOLTON
Record/rank: 37-0, No. 3
Coach: Kirk Younts, first season (37-0)
League finish: First in Central State Activities Association Silver.
Championship history: Has never played in an MHSAA Final.
Players to watch: Ashley Friend, sr. C (.661, 18 2B, 63 RBI); Rachel Younts, sr. P (.320, 13 2B, 26-0 pitching, 0.84 ERA, 185 K); Jacki Stone, sr. OF (.617, 52 R, 17 2B, 50 RBI).
Outlook: Holton has made a Semifinal once before, in 2013, and can finish off one of the most tremendous seasons in MHSAA history if its closes with a championship. The Red Devils advanced by beating No. 7 Coleman in the Quarterfinal and won a league filled with larger opponents while keeping opponents at two runs or fewer in 29 games. Stone made the all-state first team last season, and Friend and Rachel Younts earned honorable mentions. The lineup opens with two more .400-plus hitters in sophomore rightfielder Emily Larabee (.487, 60 R) and senior shortstop Katie Wildfong (.431, 60 R), who also was 8-0 pitching with a 1.60 ERA heading into the week.

PHOTO: Holton third baseman Kaitlynn Mock anticipates a play as a Coleman runner turns toward home during their Quarterfinal on Tuesday. Holton won to remain undefeated and advance to a Division 4 Semifinal. (Click to see more from HighSchoolSportsScene.com).