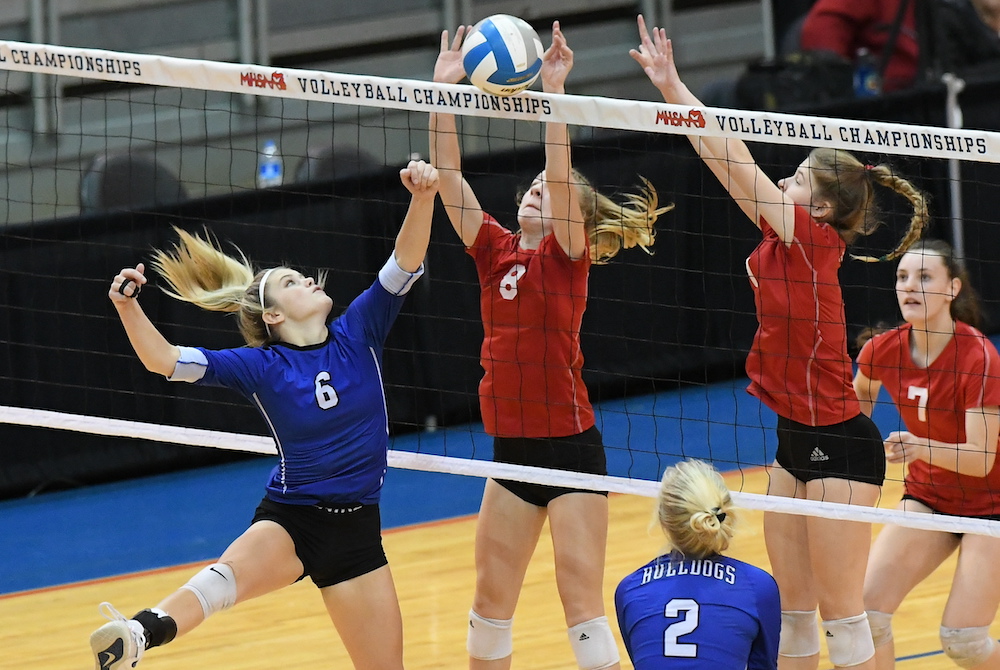 BATTLE CREEK – The state’s winningest volleyball program is back to doing what it does best – winning consecutive MHSAA Finals.

"For me, it’s just a whole different aspect now, seeing those little girls up in the stands,” St. Philip senior Brooke Dzwik said. “That was us at one point. They’re going to be the legacy. It’s not us anymore, it’s them. To really win so that they could see means a lot.”

St. Philip now has 22 Finals titles, including a record nine straight from 2007-14. If the win a year ago in a COVID-interrupted season wasn’t enough to prove the Tigers were back, Saturday’s dominant result should more than handle that.

“Last year everyone thought that we didn’t deserve the championship,” St. Philip senior Bailey Fancher said. “This year, there was no COVID (pause), there was nothing stopping us, so we wanted to prove everyone wrong that we were made to win both last year and this year’s state championships.”

St. Philip (40-11-1) entered the postseason ranked No. 3, and defeated No. 2 Athens in the Regional Final and No. 1 Adrian Lenawee Christian in the Quarterfinal just to get to Kellogg. Getting to play the underdog was a role the Tigers relished.

“We were the underdog all last year, too,” said Dzwik, who was one of five starters who returned from last year’s team. “Part of it is the competitive nature in all of us, that we wanted to prove everyone wrong, that we shouldn’t be the underdog.”

They were not the underdog Saturday, however, playing Finals newcomer Inland Lakes, which was coming off its first Regional title since 1995.

Inland Lakes (27-11-11) didn’t seem to be fazed by the moment early on, trading blows with the reigning champions, and even responding to a 4-0 run midway through the first set with a 4-0 run of its own, tying the score at 16. But following a timeout, St. Philip rattled off eight points in a row to take control and put the first set away. 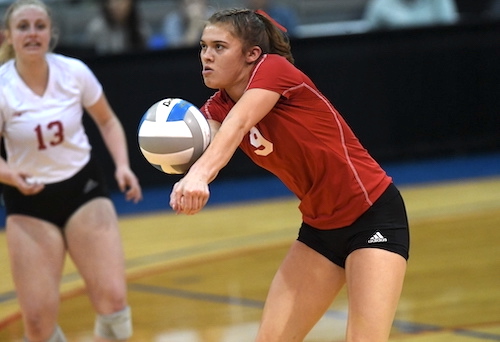 From there, it was all Tigers.

“Our hitting wasn’t as powerful today – I think they got a little nervous and frazzled as things weren’t going their way,” Inland Lakes coach Nicole Moore said. “That’s a solid team that has great hitters that we weren’t adjusting to and getting touches on. That’s been our goal the whole time, and it’s worked most of the time, but today we just weren’t able to get those touches that we needed on those big hitters.”

For the Tigers, keeping the momentum when they got it was important, as St. Philip coach Vicki Groat didn’t want Inland Lakes to build confidence during the match.

“That’s a good team, and watching them on Thursday, there was no intimidation for them,” Groat said. “They were playing relaxed, they had nothing to lose, and they were the underdogs. In this stage, if you have them down, you have to keep the momentum going, keep the pressure on until the very end. I thought we did a good job of that today.”

Dzwik led the St. Philip attack with 14 kills, but Groat was impressed with how setter Rachel Myers spread the ball around throughout the match. Maddie Hoelscher (five kills), Alexis Snyder (five kills), Alex Kersten (four kills) and Makenzee Grimm (four kills) all helped to keep Inland Lakes off balance, and not allow it to focus solely on Dzwik. Kate Doyle led the St. Philip defense with 12 digs.

The disappointing finish didn’t take away from the historic season for the Bulldogs, as Byrne noted, “We played volleyball as long as we could.”

“We talked about before the game, we made this visual where we have this outer ring of people – northern Michigan volleyball, we’re the only people here, right,” Moore said. “We were representing them. We were representing our conference, our region, because not a lot of northern Michigan teams make it down here. We were the smallest school and the farthest school away, and I think we had a lot of blue in the stands, so that was really cool to see.”