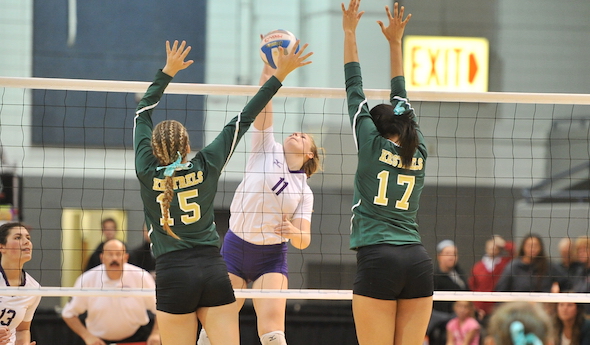 BATTLE CREEK – Alexa Ratkowski wears jersey number 1, and so she was first through the hug line as Bronson accepted its Class C championship medals Saturday at Kellogg Arena.

She had a smile across her face until she hugged coach Jean LaClair and the first tears fell. Every teammate following her seemed to drop a few more.

Bronson often wasn’t the tallest or most physically intimidating team on the volleyball court this season, and especially the last few weeks. The Vikings even had to make up for graduating an all-state hitter this spring.

But they had other ingredients that make an MHSAA champion – most notably chemistry to go with a skillful mix of seniors through freshmen and an all-state setter like Ratkowski, who had 34 assists plus six kills in leading Bronson to a 3-0 sweep of reigning champion Monroe St. Mary Catholic Central – 25-22, 25-21, 26-24 – for its first title since 2009.

“Working together and just building with one another; all summer this is what we’d look forward to,” said Ratkowski, who ended this season with the third-most assists in MHSAA rally scoring history. “Playing throughout the season, we knew we were number one. But rankings didn’t mean it. It all came down to the state title and how we performed, and I think we performed to our ability.”

The Vikings did indeed hold the top ranking in Class C for the final two months of the season, finished 57-10-3 and added a league title after not winning their conference or making it out of their District a year ago for the first time since the winter 2006-07 season.

It was about a month into this fall that LaClair – who has coached at three schools over 22 seasons and went over 1,000 career wins in October – saw the makings of a championship contender.

“Early on in the season I think they were frustrated. But we have some freshmen, sophomores playing key roles, and it really took them some time to get into the mold of what varsity volleyball is all about,” LaClair said. “They get along so well. In girls sports, team chemistry is more important than anything else.

"The other thing, I think, is we have a lot of depth. I had some kids who came off the bench today to do some great things for us. That ability to go through 10 or 12 deep really helps in a big match like this.”

It definitely helped during Saturday’s first set as Bronson got down by as many as nine points. Senior outside hitter Kirin Cekander – who LaClair calls the team’s “energizer bunny” – admittedly got off to a rough start. But some switches helped the Vikings pull together a 21-9 swing to win the first set – with Cekander getting kills for two of the final four points. 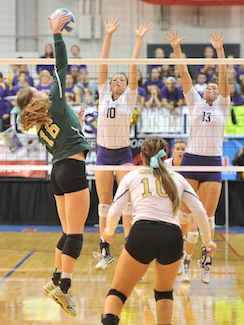 “The first game just set the stage in all of us,” Ratkowski said. “We were down by eight, and we said this is not it. We’re not letting down.”

Bronson trailed again by two points midway through the second set, but broke away for the final four points, including a pair of kills by sophomore outside hitter Kiana Mayer.

The teams were tied 24-24 in the third set before junior Jill Pyles and then Cekander drove the final points home.

St. Mary (37-9-1) played in its eighth MHSAA Final but first with former assistant and Division I college head coach O’Brien running the program. She inherited a strong group of seniors she and retired coach Diane Tuller nurtured last season who then came up big this fall.

“After last year, losing as many seniors that contributed a lot, our seniors stepped up this year,” O’Brien said. “Skylar, Nicole, Regan, Abby and then Rose (Kemmerling) – Rose was our manager last year. You go from manager to being setter in the state finals. I think that just says a lot about her character.”