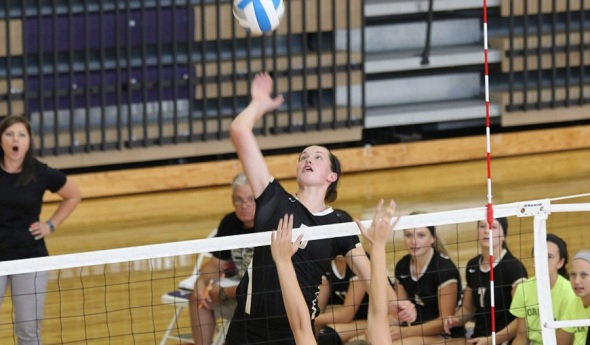 CORUNNA – Meredith Norris has traveled all over the United States thanks to her ability to crush a volleyball and stop opponents from doing the same.

The Corunna junior already knows her college destination, a Big Ten university a few exits down the highway. She’s had a taste of international competition, and is drawing closer to challenging for a spot on the U.S. youth national team.

But home is never far away from the 6-foot-3 outside hitter’s heart.

Her successes took root during afternoons as a ball girl dodging spikes during high school practices coached by her mom, while growing up in this town of 3,500 that her Detroit-area club teammates think is either in Alaska because it’s so far away or Nebraska because of the surrounding rural landscape.

Those who follow volleyball have figured out where Corunna is located. And those who know Norris understand why, despite all she’s accomplished on volleyball courts nearly coast to coast, this month’s opportunity to lead the Cavaliers to unprecedented heights carries so much importance.

“I like to represent my town doing all of these big things,” Norris said. “I like to put Corunna on my back.”

And she literally does – “Corunna” is spelled across the back of her and her teammates’ jerseys.

The Cavaliers will face host Flint Powers Catholic in a Class B District Semifinal on Thursday. Corunna is seeking its third straight District title against a field that also includes familiar league foes Goodrich and Lake Fenton. And if the Cavs succeed this week, they’ll have another shot at history – a first Regional championship.

There certainly are expectations.

Norris is considered by many to be the state’s top junior, an MHSAA record holder after drilling 53 kills in a five-set District Final win over Goodrich last fall who passed 2,000 career kills this season and should next fall become only the second player in MHSAA history to total 3,000. Norris has 757 kills this season and 2,208 over three – with five more kills she’ll move to eighth on the career kills list.

She’s also played plenty of high-pressure matches. Norris competed as one of 33 invitees at this summer’s USA Volleyball girls youth A1 national training team program, the final step before competing for one of 12 spots on the youth national team. As part of A1, she traveled to Iowa in July for five days of training followed by five more of competition at the USA Volleyball High Performance Championships. She made the top U.S. team at the camp, and with teammates from all over the country faced a field that included teams from Canada, New Zealand and the Dominican Republic.

That was just the most recent of travels that have taken her all over the country for additional USA Volleyball training, club tournaments and college visits.

But in the end, she’s always come home to the court she’s made a second home most of her life.

Home on the hardwood

Meredith’s mother, Nikki Norris, is Corunna’s athletic director and also served as its volleyball coach from 1999-2002 and again from 2006-09. From ages 5 to nearly 12, Meredith spent in-season afternoons after school at her mom’s practices. 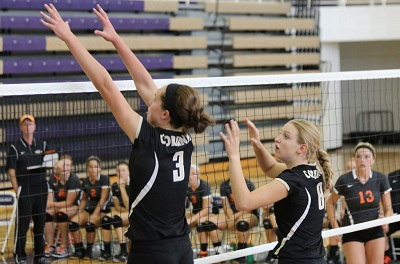 “It’s weird to think about, because if I didn’t grow up in the gym with her being the coach, I don’t know if this is what I’d still be doing,” Meredith Norris said. “If she was the basketball coach, would I be doing all of this stuff in basketball? Would I even be playing volleyball? So her being the one to introduce me to volleyball is the reason I’m in it. She introduced me to it, made me fall in love with it.”

Meredith was born with ingredients for athletic prowess. He dad, Dr. Robert Norris, is 6-foot-9 and played basketball at Alma College – and Meredith grew to 6-foot by eighth grade. Nikki competed in track and field at Alma – and Meredith’s athleticism crosses over to both of her parents’ college sports. She played on the varsity basketball team as a freshman (she since has given that sport up) and made the MHSAA Finals in high jump last spring while also throwing discus and running an occasional race.

Nikki, although she didn’t play volleyball at the college level, joined Alma College’s coaching staff for that sport as an assistant right after graduation, and later coached at Carson City-Crystal before taking over at Corunna. Meredith learned fundamentals attending her mom’s youth camps and training sessions for the high schoolers. She picked up an advanced understanding of the game watching all of those practices and then every Corunna home match from the bench, and MSU matches later on.

She talks about playing “efficiently,” which seems advanced as well as she explains, “I as a player think smarter, not harder.”

But there was a point during middle school when Meredith would analyze situations too much, which led her to be timid instead of attacking with her natural abilities – and led to her mom stepping in to light a fire.

“I remember we were in the car, and I told her, ‘When the game is on the line, the winner wants the ball. What’s it going to be?” Nikki Norris recalled. “She’d heard me tell teams that I wanted them to go down swinging.

“She figured out that to be successful at this, (she's) got to be the one who steps up and takes the big swing.”

'You’ve got to have a good teacher from the start.'

Norris could have been saying that to explain her mom’s influence, or those of middle school club coaches who helped hone her skills early on. Or what she’s tried to be to her teammates, sharing her various experiences with girls she’s known since first grade. 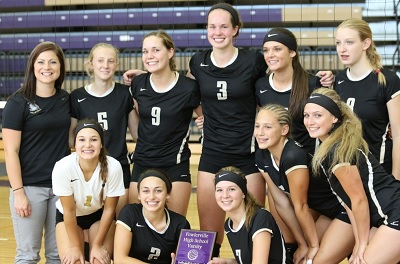 “She has so much volleyball knowledge that she brings to this team,” Corunna coach Kari Carnell said. "She has experienced high-level volleyball, and she knows the ins and out of the game. It’s easy for her to give a teammate a tip or some advice in the moment.”

Most of the time, Norris passes on little things she’s picked up during her variety of experiences – maybe a tip on a shot or an opponent's tendency she's spotted. Carnell said Norris reads things so well on the court that she can make adjustments for herself and her teammates, who are receptive and appreciative of the advice.

Norris isn’t the only player with experience, of course – senior setter Skylar Napier owns the school record for career assists – and together they’ve led the Cavs to a Class B honorable mention and 34-11-5 record heading into this week.

Norris also carries a 3.9 grade-point average and is interested in studying kinesiology, and might follow her dad into medicine (he’s the team physician for MSU’s volleyball, hockey and baseball teams.).

But seeing the impact she’s had on her high school teammates, it wouldn’t be tough to imagine Meredith following her mom into some coaching as well.

“It means a lot because I know that I’m making my teammates better,” Norris said. “They’re choosing to play high school volleyball, and if they enjoy it and if they’re learning throughout the season, and if I’m doing that, that makes me really proud that I’m teaching them and they’re liking it and they’re understanding what they’re doing.

“And if they make a mistake, they understand what they made and how to fix it. I think it’s really cool.”

PHOTOS: (Top) Corunna's Meredith Norris attempts a kill earlier this season. (Middle) Norris, left, and a teammate go for a block, their jerseys showing "Corunna" across their backs. (Below) Norris (3) poses with her teammates after the Fowlerville Invitational. (Photos courtesy of Corunna High School.)