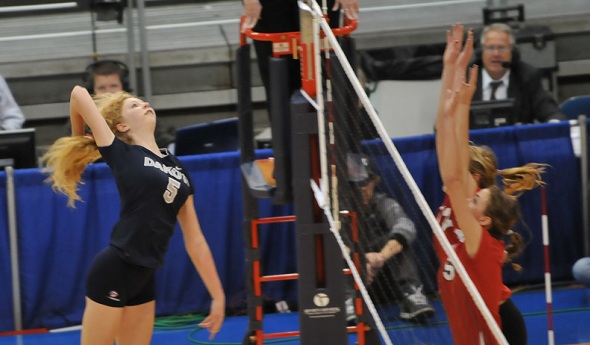 BATTLE CREEK – On one side of Saturday’s Class A Volleyball Final stood Temperance Bedford, with three MHSAA championships and led by the second-winningest coach in national high school volleyball history.

On the other sideline, Macomb Dakota prepared for its first championship game since the school opened in 1996, when most of the Cougars were just learning to walk.

That imbalance didn't end up deciding much on this day, but was certainly something Dakota considered before making its own history with a 25-22, 25-21, 26-24 win over the Kicking Mules.

It was truly a milestone run for the Cougars, who didn't give up a set during the entire tournament.

“We’d never played Bedford before. We'd never played (Semifinal opponent) Northville before. So I think it showed so much adaption for our team and so much depth that we could come in barely knowing anything about their teams, with 10 minutes of scouting video, and we can take them down in three,” Dakota junior hitter Carli Snyder said.

“It’s ideal for that to happen, but it doesn’t happen very often. Great teams drop games because they play badly, but we didn’t (through the tournament) because we kept playing tough the entire time. It’s incredible.”

Seemingly everyone in Battle Creek knew Snyder would be on the attack.

But that hasn’t helped opponents the University of Florida-bound standout all season. And it didn’t make much difference at Kellogg Arena.

Snyder, in just three sets, had 31 kills – third-most in an MHSAA Final since the beginning of the rally scoring era in 2004-05.

Bedford had survived the Semifinal against Grand Haven despite 20 kills by Miss Volleyball runner-up Abby Cole. But Snyder was unstoppable when it counted most.

She killed the final two points of the first game and the final point of the second. With Dakota trailing by three in the third, Snyder had three straight kills to make it 14-14. Her final attempt of the day was dug – but Bedford’s return went wide down the right side.

“We just had to adjust to her and learn from her and get better,” Bedford sophomore middle Nicole Rightnowar said. “She hit where we weren’t, and it was really hard to block her.” 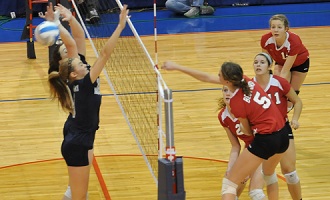 The Cougars have learned a lot in short time. Only three seasons ago, Dakota finished 19-27-3 in coach Tracie Ferguson’s second year.

But the former Clinton Township Chippewa Valley standout (who later played at Wayne State) led the Cougars to a near reverse of that record in 2010 before guiding them to the first of two straight Regional titles last fall.

Dakota entered the District this season ranked No. 3 and finished 59-5.

“When I played in high school, it was Bedford and Jodi (Manore) was still coaching. And honestly, coming into tonight, I knew she was the coach and knew they had a great team, a very technical team … and I gave the girls that input that, ‘Hey, they know how to play volleyball,’” Ferguson said. “Bedford is a big volleyball school. But at the same time, we’ve come a long way. What we’ve accomplished and built on, we were right there with them.”

Bedford’s run was equally exceptional considering that although the Kicking Mules were ranked as high as No. 6 this fall, they entered the tournament an honorable mention.

“If you look back and ask a lot of the teams we played this year if we were going to be state runners-up, I don’t think too many would’ve picked us,” Manore said. “We came up a little short once we got here, but we beat two really good teams to get to the Finals in Mercy and Grand Haven. I think we came up against not only a team with the best player we’ve played all year, but her supporting cast stepped up I think a lot bigger than we saw (Friday).

“Give her 31 (kills). But there were some other kids there that had quite a few, and that was our problem.”

Dakota junior setter Megan Manuerski had 43 assists, good to tie for 13th on the MHSAA Finals record list. Snyder also had 14 digs and senior outside hitter Megan Downey had 19.

PHOTOS: (Top) Macomb Dakota junior Carli Snyder prepares to unload on a set during Saturday's Class A Final. (Middle) Temperance Bedford's Nicole Rightnowar puts down one of her 11 kills.