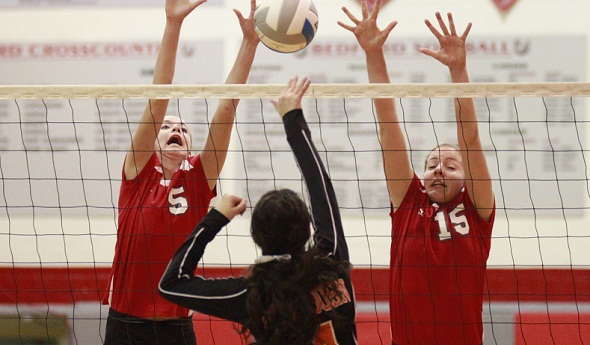 Ten of 16 teams traveling to this weekend's Volleyball Semifinals are seeking their first MHSAA championships. Nine are hoping to advance to Saturday's title games for the first time.

And only Kellogg Arena regular Battle Creek St. Philip returns from last season's winners. But although the Tigers aren't among those going for first-time stardom, they're looking to make a little history as well; a seventh straight Class D title would be the second-longest such streak in any class in MHSAA volleyball history.

Below is a look at all 16 teams playing this weekend. Class B and C Semifinals are Thursday, with Class A and D on Friday and all four Finals on Saturday. All four Semifinals and Finals will be streamed live and then archived at MHSAA.tv. Click here for a full schedule of this weekend's games, plus links to brackets from every round of the tournament.

Tickets cost $6 for Semifinals and $7 for Finals, with a Semifinal-Final ticket available for $15.

(NOTE: Rankings are those published by the Michigan Interscholastic Volleyball Coaches Association. Player statistics are through Regional Finals.)

NORTHVILLE
Record/rank: 49-3-4, honorable mention
Coach: Amanda Yaklin, fourth season (132-61-20)
League finish: First in Kensington Lakes Activities Association Central
Championship game history: Has never appeared in an MHSAA Final.
Best wins: 3-1, 3-0 and 3-1 (District Final) over honorable mention Novi, 3-2 over No. 9 Livonia Churchill, 2-1 over Dearborn Divine Child.
Players to watch: Symone Abbott, 6-0 jr. OH (565 kills), Rebecca Martin, 5-10 sr. S (181 kills, 1,280 assists, 108 blocks, 280 digs).
Finals forecast: Northville steadily has improved under Yaklin from a team that went just 16-23-6 in her first season of 2009 to one that has reached 40 wins the last two seasons. The Mustangs also won the KLAA Kensington Conference (made up of the Central and South divisions) before falling to Novi for the overall league championship – although they then beat Novi in the District.

MONROE ST. MARY CATHOLIC CENTRAL
Record/rank: 47-6, No. 1
Coach: Diane E. Tuller, 15th season (496-177-50)
League finish: First in Huron League
Championship game history: Three MHSAA titles (most recent 2010), two runner-up finishes.
Best wins: 3-0 over No. 5 Manchester (Regional Semifinal), 2-0 and 2-1 over Temperance Bedford, 3-1 and 3-1 over New Boston Huron.
Players to watch: Alexis Thompson, 5-8 sr. L/RH (117 kills, 96 blocks, 236 digs); Cassandra Haut, 6-2 soph. MH (438 kills, .377 hitting %, 241 blocks); Clare McMillan, 5-5 sr. S (889 assists), Taylor Vuich, 6-0 sr. MH (371 kills, 119 blocks).
Finals forecast: The Kestrels have made at least the Semifinals seven of the last eight seasons and finished runners-up last season after losing in five games to Morley-Stanwood. Thompson made the all-state first team as a libero after that run, and McMillan and Haut both earned honorable mentions. Although St. Mary has just one win over a ranked Class C team, that’s in large part because it played almost all Class A and B teams this fall – half of the Kestrels' losses came either to Class A No. 4 Bloomfield Hills Marian or No. 10 Lake Orion.

TRAVERSE CITY ST. FRANCIS
Record/rank: 41-7-3, No. 10
Co-coaches: Heather Simpson and Rita Jones, first seasons (40-7-3)
League finish: First in Lake Michigan Conference
Championship game history: Has never appeared in an MHSAA Final.
Best wins: 3-1 over No. 4 Calumet (Quarterfinal), 2-0, 3-0 and 3-1 over Charlevoix, 2-0 over Class D No. 3 Beal City, 2-0 over Class D No. 4 Leland.
Players to watch: Bridget Bussell, 6-1 sr. OH/MH (517 kills, .370 hitting %, 110 aces), Kaitlyn Hegawald, 5-10 sr. S (957 assists, 120 aces).
Finals forecast: Calumet in the Quarterfinal broke an 11-match sweep streak by the Gladiators, who have surged under Simpson and Jones. They were hired in July after coaching the junior varsity the last two seasons, an inherited all-state second teamer Bussell and third-teamer Hegawald. They are two of only three seniors on a team that could be back over the next few seasons – the second and third-leading hitters are among six underclassmen on the roster.