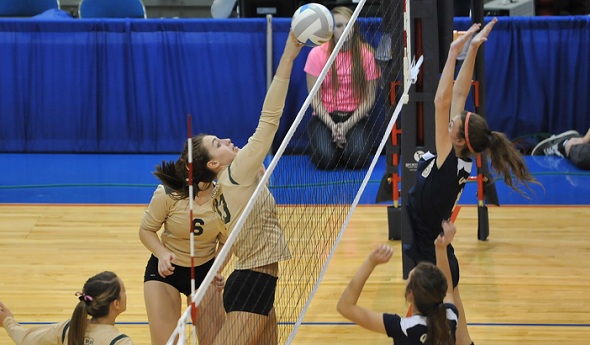 BATTLE CREEK – Taylor Vuich and her teammates have learned to ride the wave of a good omen.

And so, when her hotel room was the first among Monroe St. Mary Catholic Central’s to wake up Saturday morning, and their favorite song was playing when they flipped on the radio, the Kestrels just knew “today was the day.”

Saturday was the day St. Mary got back the MHSAA Class C championship after coming within three points of a second-straight title one year ago.

The Kestrels claimed their second championship in three seasons and fourth overall with a 25-14, 24-26, 25-10 and 25-9 win over first-time finalist Traverse City St. Francis at Kellogg Arena.

“We got all the way here last year, (played) two and half hours, and then it just slipped away from us,” Vuich said. “They were a great team, but I think we knew this year that this is what we wanted. We wanted to prove to everyone that we’re state champions.”

It’s fair to call the 2011 Class C Final epic. All five games were decided by three or fewer points, with Morley-Stanwood claiming the last 15-12.

With now five championship game appearances over the last 11 seasons, it’s also fair to say the Kestrels (49-6) set high expectations heading into every fall – even if that might’ve turned a little dangerous earlier this week. 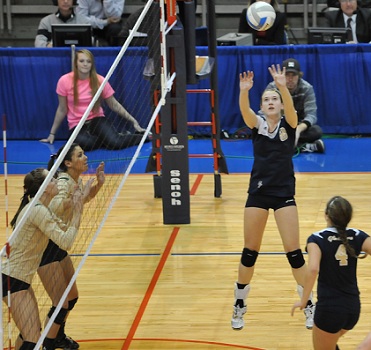 “I think we overlooked the team we played in the Quarterfinals (Auburn Hills Oakland Christian). It was our worst game of the year. Everything shut down. … (But) our senior captains really wanted it, and they kept them focused. I gave them the job of keeping this team together.”

And they got back together quickly after the Gladiators took a close second set.

St. Mary scored the first 10 points of the third game and then jumped out to a 10-1 lead in the fourth.

And when junior McKenzie Todd and sophomore Cassandra Haut combined to simultaneously crush the winning point straight into the floor, it was a strong lasting impression of how those last two games had gone.

Haut, an all-state honorable mention as a freshman, finished with a team-high 16 kills from her powerful right arm. Vuich, swinging a hammer with her left, added 13 kills and eight digs, and Todd had 10 kills.

Senior Claire McMillan had 46 assists, tied for ninth-most in a Final since the beginning of the rally scoring era in 2004-05. Junior Kelsey Geiman – beating the previous record by five (and the record from before rally scoring by seven).

"We are really deep, in all our players. We have a lot of good hitters on our team,” Haut said. “We can always count on anyone on our team.”

St. Francis finished 42-8-3, impressive all the more because co-coaches Heather Simpson and Rita Jones didn't take over until a month before practice began.

They moved up from coaching the junior varsity after the former varsity coach resigned to take another full-time job.

“Our kids don’t quit, and I don’t think how we played today is really a reflection of how good we were, or are,” Simpson said. “From that aspect, it’s disappointing. But hats off to them. They’re a good team, and we are too, but we couldn't match them.”

St. Francis senior Bridget Bussell just missed getting into the Finals records as well, with her 18 kills just two short of that list. She also had six digs, and senior setter Katilyn Hegawald had seven and 26 assists.

“We just never got into our groove, except for the game we won,” Bussell said.

(But) we knew we were here for a reason, so we tried as hard as we could to keep pushing.”