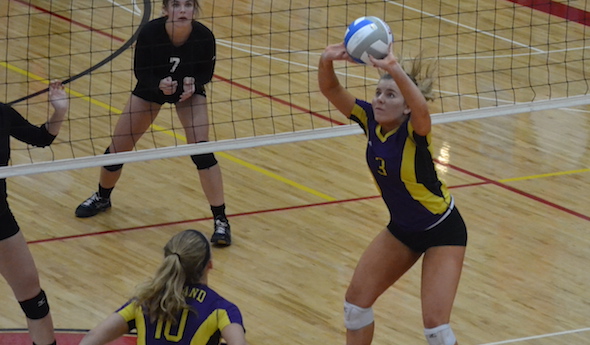 Leland captured its sixth consecutive Regional on Thursday with a hard-fought 25-15, 25-23, 25-22 triumph over Fife Lake Forest Area. The Comets now face Mount Pleasant Sacred Heart in a Quarterfinal on Tuesday at Buckley. A win would advance Leland to the Final Four at Kellogg Arena in Battle Creek for the fourth year in a row, and it would also be the 1,000th career victory for coach Laurie Glass.

The Comets are enjoying success with a rebuilt lineup in 2016. Leland lost three senior starters off last November’s title team, including all-staters Maddie Trumbull and Eva Grobbel, who led the squad in kills and blocks. Then, during the summer, the Comets lost returning letterwinner Rachel Bechtel to a knee injury.

With all that youth, Glass wondered prior to the season about chemistry, and how the underclassmen would “mesh” with the six seniors. Turns out, she had nothing to worry about.

“This team has been all in since day one,” she said.

The Regional title was proof. It took a team effort to beat Forest Area.

“I think the strength of this team is the bond, the relationships we have with each other,” Siddall said afterwards. “We’ve worked so hard together – from June until now – to get better. That’s been our goal, and I think we’ve accomplished it. I couldn’t be prouder of this team.”

Glass, who’s won MHSAA Finals championships as a player and coach at Leland, was feeling a deep sense of pride as she watched her players receive their medals Thursday night.

“It never gets old,” she said. “I’m just so thankful that this group, which has worked super hard, had a chance to feel what it’s like to get that medal. They earned it, they deserved it. They put in the time and energy, mentally and physically, to get it done. I don’t think you could want more as a coach then to watch the kids reap the benefits of their hard work.”

The win over Forest Area did not come easy. Martin, based on her experience last season, expected as much.

“The farther you get in the playoffs, the more you have to battle because the better the teams get,” she said. “They’re (Forest Area) a very good team. They were digging everything. It was fun to play competition like that.”

Glass told her Comets, ranked No. 3 in the coaches’ poll, that they should always enjoy playing a quality foe.

“I said, ‘Isn’t it much more fun to play a game that’s on the line then to play in a blowout that doesn’t feel great when you’re done?’” she said. “When it’s tight we should be going, ‘Oh my gosh, this is the best thing ever.’ I thought we played like that tonight. We embraced it. 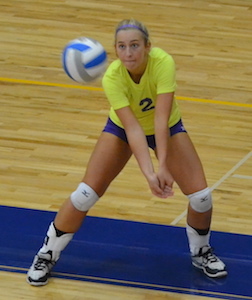 And that’s what happened in a match that featured several lengthy volleys.

“They showed intensity, they showed perseverance,” senior libero Julie Bardenhagen said. “We just had to stick to what we do best on our side (of the net).”

Martin, Siddall, Bardenhagen and junior Rowan Wilson gained valuable experience a year ago, and they’ve been leading the charge this season. Statistically, Martin leads in kills (534) and aces (114) and is second in digs (479). Siddall is tops in assists (1,100), Bardenhagen in digs (514). Wilson is second in kills (373) and third in digs (475).

Glass is now a win away from joining an exclusive group of coaches. Only 10 other Michigan high school volleyball coaches have achieved 1,000 or more career wins.

Glass said when she looks back it’s the players, not the wins, that stand out.

“I remember the girls,” she said, “and the things they went through, the challenges they overcame, the mental things they had to surpass in order to be their better self. I’ve watched the transformation of these girls from the middle school right on through our program – under guidance of great people below me. It’s been a great experience. I wouldn’t want to be anywhere else, doing anything else.”