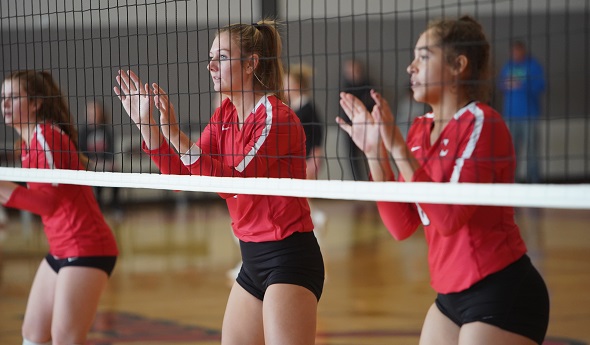 LOWELL – The Lowell volleyball team has earned a trip to the season’s final week for the first time.

A beefed-up regular-season schedule helped pave the way toward school history – last week’s program-first Regional title and a spot in Tuesday’s Division 1 Quarterfinal at Jenison against No. 3 Mattawan.

“That was something I looked at with my coaching staff after losing to Rockford last season,” Drake said. “What can we change in order to not be in this situation again next year? I talked with my athletic director, and I said to put us in the hardest tournaments that we could.”

The No. 2-ranked Red Arrows haven’t shied away from playing against, and beating, the top teams in the state en route to a stellar 53-3 record. Lowell has wins over seven more of the top 10 in the final Division 1 coaches poll, plus the top two ranked teams in Division 2 and No. 1 team in Division 3. The Red Arrows early this season handed Division 1 No. 1 Farmington Hills Mercy its only loss (although, it should be noted, Mercy was playing without senior hitter Jess Mruzik, who was in Egypt with the U.S. U-18 national team and was back when Mercy won a rematch with Lowell last month).

“I knew we had a good team last year, but we just weren’t battle-tested,” said Drake, whose team also won the first conference title in school history last season.

“Playing Mercy, Grand Rapids Christian, Lake Orion, Hudsonville, Lakewood and Schoolcraft that are championship-contending teams, those are the conversations that you want to be in and the matches you want to be in throughout the whole season so when you get to this point you feel like you’ve been there before. I think it’s been a huge difference-maker for our kids.”

“Coach put us in tournaments where we could be exposed to those good teams more so we would be experienced and ready for when it came to moments like this,” she said. “That really showed us what we’re capable of doing.” 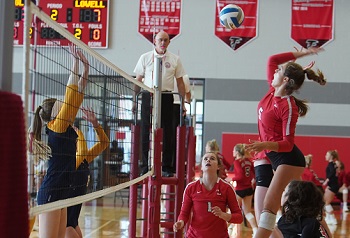 Lowell defeated No. 4 Hudsonville 3-1 in the Regional Final. It was a gratifying win that accomplished a season-long goal, while also avenging two of the Red Arrows' losses this fall.

“The girls were ecstatic, and winning Regionals was obviously one of the goals we had set out for ourselves this season,” Drake said. “It’s right where we want to be, and we’re taking this thing one game at a time and we’re looking forward to a great competition with Mattawan. It’s going to be another tough battle like the road we’ve had. It’s been just a grind.”

Junior outside hitter Jenna Reitsma, who leads the team with 795 kills to go along with 379 digs and 82 aces, was thrilled to pull off another program first.

“We were all just really excited, and we worked really hard to get here,” Reitsma said. “We wanted to get past that milestone, especially since our school hadn’t done it before, so it was exciting to make history and work hard together to get that win.”

The Red Arrows returned eight players this fall from a year ago. However, experience alone wasn’t going to be enough to help the team meet heightened expectations.

The intangibles also needed to be developed.

“I definitely thought we could reach this level, but it was a matter of them wanting to put the work in,” Drake said. “There was a lot of things we still had to get better at from last year, and that included taking game by game and growing from our losses against tough teams.”

Still, the five-set loss to Rockford that ended their 2018 season provided perfect motivation.

“I know when we were playing different teams we kept that loss in the back of our minds,” Meyer said. “We used that as willpower to push through. It was hard losing to them, and we remembered that. We pushed ourselves harder.”

“We have never been this far in Lowell history, but we’re just going to work our hardest,” Meyer said. “It’s going to be a good game, and I believe we’re ready.”

PHOTOS: (Top) Lowell hitters await the serve during the St. Johns Invitational on Oct. 5, where the Red Arrows went 6-0. (Middle) Meghan Meyer (5) loads up for a kill attempt. (Click to see more from HighSchoolSportsScene.com.)