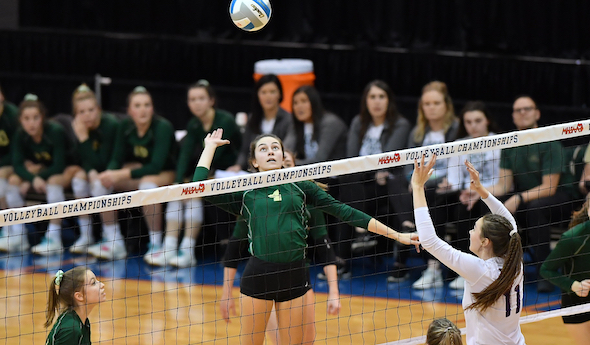 BATTLE CREEK – The Monroe St. Mary Catholic Central volleyball team didn’t mean to be prophetic when it made “I’ve got your six” its season motto.

But on Saturday, the saying’s original intent – that each team member had the other’s back – gained a new meaning as the Kestrels brought home the school’s sixth MHSAA Volleyball Finals title with a five-set victory against Schoolcraft.

“Being here last year and going through a five-set loss (in the Semifinals) really fueled us,” St. Mary coach Karen O’Brien said. “I just think to have that experience of playing in that gym with the lights and the fans helped us. We wanted this from Day 1. We knew this was our goal to be here. It’s great for the four seniors to be able to come back and win our sixth. I know the reporter Jeff Mead (Friday) asked, ‘Does that six mean the sixth state title?’ It never was intended to be that way. But it might be a coincidence.”

It’s the first title for the Kestrels under O’Brien, who previously coached at Eastern Michigan University. O’Brien underwent treatment earlier in the season for her third battle with ovarian cancer.

“I don’t want to do anything but coach them when I’m going through treatment,” O’Brien said. “Because it’s something to look forward to, and I can leave cancer (to the side).”

While going through treatment, O’Brien lost her hair and had a temporary tattoo on her forehead that symbolized the team’s other saying, “Allow your faith to be stronger than your fears.” She had one on her wrist Saturday, along with every member of the team.

“Last year when we were here, the fears got the best of us,” O’Brien said. “The tattoo is just a reminder to have faith, not only in God, but in our players and the coaches and the program. And it was really just a reminder of that.”

The Kestrels had to have faith Saturday, as the much-anticipated battle between the top two teams in the Division 3 rankings lived up to its billing. The teams proved to be very evenly matched, and any multi-point run seemed like a major victory.

“I think we played a great game, and if we play them again, maybe we beat them in five,” Schoolcraft coach Erin Onken said. “I think that matchup goes more sets than three every single time. We have a ton of respect for them, and we knew it was going to be tough.”

It was the No. 2 Kestrels who made the final run, winning the final three points. St. Mary senior Samantha Michael and junior Mikayla Haut combined for a block on Schoolcraft star Andelyn Simkins to close out the match. 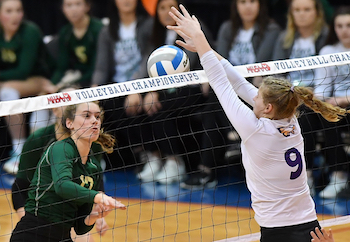 “Coach O’Brien always says if you see a hitter moving in, you’ve gotta move with her,” Michael said. “We just got our hands up, we pressed the six and we got her. It was just like the best feeling. It felt unreal.”

Schoolcraft raced to an 11-4 lead in the first set, but St. Mary came all the back and even led 20-19. A Simkins kill ended a back-and-forth finish to the set and gave Schoolcraft the initial match lead.

The second set was following the same back-and-forth path, until SMCC was able to open up a four-point lead at 19-15, forcing a Schoolcraft timeout. While the Eagles were able to match SMCC the rest of the way, they couldn’t get closer than three points and the Kestrels tied the match at a set apiece.

Simkins was a force in the third set, helping her team get a little bit of separation midway through. She had eight kills in the set, but that didn’t even cover the impact she made, as on multiple points she fired more than one spike at the SMCC defense to keep the Kestrels off balance. She closed out the set with a deft tip and put her team one set from a title.

The Kestrels had different plans, however, racing out to a 9-4 lead in the fourth set to force a Schoolcraft timeout. The Eagles fought back to within one at 14-13, as Simkins had four kills in a five-point stretch. But SMCC was able to stretch the lead back out and force the fifth and deciding set.