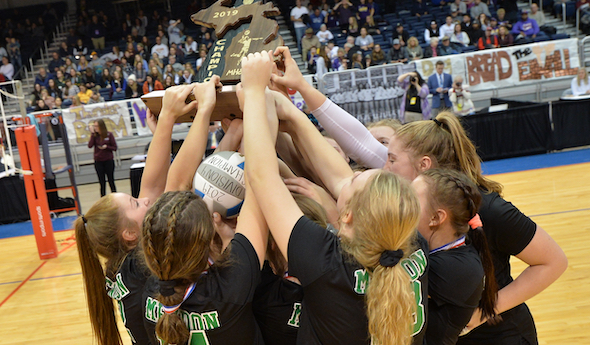 BATTLE CREEK – All Heather Bowers does is win MHSAA titles.

Last year’s title was the first since 2001 for the Hornets (40-9-6). But even after losing six seniors, this year’s group came in with experience winning on the Kellogg floor led by junior Anna Smith. She was dominant for the second straight year, with 22 kills, 13 digs and four aces.

“The fact of the matter is she can score at will against our team – against any team. I haven’t seen anybody shut her down,” Leland coach Laurie Glass said. “She has all the shots. She gets up there and she sees tips, she sees the corner, she sees the line, she sees the cross. At this level, not a lot of D4 schools have kids that can do all of that at will. She’s super talented, and it’s unfortunate for us that she’s a junior and will be returning next year.”

Smith was the main target for Hornets setter Gracie Russell, who finished with 41 assists. But Russell spread the ball around, keeping the Leland defense guessing. Senior Taylor Heitkamp was second on the team with 12 kills.

“We knew (the Comets) were such a balanced team that we had to be one, too,” Bowers said. “We all showed up, we all got involved. It was amazing. It was a great group effort.”

Leland’s attack was three-pronged, led by junior Tatum Kareck with 15 kills, senior Gillian Grobbel with 13 and Olivia Lowe with 11. Jana Molby had 37 assists for the Comets (44-15-3).

But a strong Hornets defense held Leland to an overall .128 attacking percentage. Mendon finished with eight total blocks, led by five assists and one solo from junior Andrea Hoffman.

“Leland’s always had really strong hitters, so we know that we have to defend our back row so they can have our backs, too,” Hoffman said. “You have to put up a big block to run your offense, and we did.” 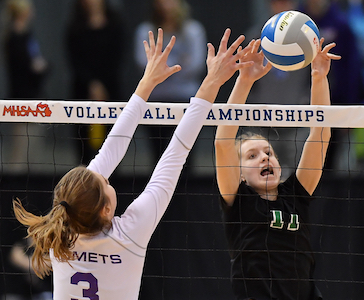 Leland won the first four points of the match, but the momentum was short-lived, as Mendon won 13 of the next 16 to take control. The Mendon lead got as high as 13-7 after a pair of aces from Smith, which forced Leland to call a timeout.

While the timeout stopped play, it didn’t swing the momentum, as the Hornets kept Leland at arm’s length on its way to a first-set victory.

The Hornets never trailed during the second set, leading by as many as eight (24-16).

Leland built an 18-12 lead in the third set, gaining momentum from an unlikely play. With her team trailing 6-4, Lowe dug a powerful Smith spike with her face, and the Comets wound up getting the better of what turned into a long rally.

The Comets had set point at 24-19, but Mendon senior defensive specialist Juliana Hagenbuch served her team back into the match and gave the Hornets a match point opportunity at 25-24. But Leland bounced back to close out the set and force a fourth.

Mendon took control of the fourth set early, leading 12-6 and forcing a Leland timeout. Thanks to incredible back-line play from sophomore Isabella Smith and Hagenbuch, the timeout wasn’t able to stop the Mendon roll, as the Hornets continued to stretch their lead. Hagenbuch finished with 19 digs, while Smith had 12.

“I think they put up a strong block today, so it was really easy to stay off their shoulder and pick up balls that they touch or they block,” Hagenbuch said. “They made my job easy today. I didn’t have to dig as many balls. I was proud of them.”

Both teams should return plenty of talent in 2020, especially Leland which loses just one senior. While Grobbel is a significant loss, the thought of a third straight trip to the Finals, and another possible chance at redemption against Mendon, was already on the mind of at least one Comets player.

“It makes me want to win even more,” said junior libero Mia Osorio, who had 10 digs. “Last year, we came into this year thinking we really want to win, but this time it’s like the cherry on top. We just want to make it down here again and hopefully see them again – and win.”