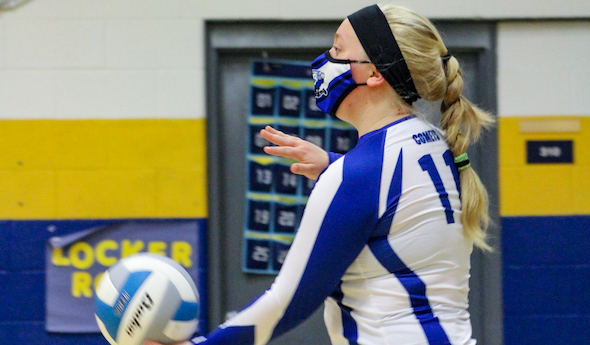 The rest of her Comets volleyball team was indeed perfect in Northern Lakes Conference play. And, you might say they are “set” for the next couple of years. She’s the team’s sole setter, and she’s only a sophomore.

“Marlie is probably the most solid player on the team,” said her coach Rachel Grooters as the Comets entered postseason play this week. “She leads in serve percentage ... believe it or not attack percentage, hitting percentage, passing percentage.

“She’s my leader in all those stats.”

“I know I have a young team,” Grooters said. “I know I have juniors and seniors, but sophomores are pretty much the backbone of my team.”

Grooters had big expectations this year thanks to her five sophomores’ previous winning ways.

“We definitely went into it with the attitude that we were going to get conference,” the veteran coach said.  “We wanted that number on the banner.

“We wanted the trophy,” she continued. “And having an undefeated season is icing on the cake.”

Along the way to its perfect NLC season, the Comets were led by the serving of Postula. She was successful in 207 straight serves at one point. She finished regular-season play missing just four serves.

The Comets’ season ended in District Semifinal play Wednesday with a four-set loss to Pickford. They finished the season with a 14-0 league and 21-12 overall record. 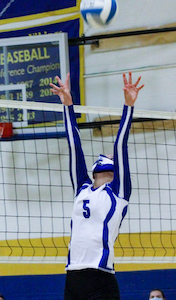 “You know, in a small school like us, you kind of get who comes out,” noted Grooters. “This is who is here. They are all athletes.

Mackinaw City was spotless in league play despite a tiny grade 9-12 enrollment of 40 students. Some of the schools in the conference are nearly twice the Comets’ size, one is more than double their size, and a few are similar in enrollment.

Conference championships have been hard to come by for the Comets. They only have three to claim. Grooters was a player on the first Mackinaw City league champ in 2000. A second title was won in 2015. The Comets were unblemished in that run too, but it was only a 10-match league season.

While the Comets’ play is far from the loudest of league teams, they are there to win, Grooters proudly indicated.

“It is funny. I think they’re quiet,” she said. “A lot of teams make more noise. Our girls take it serious. And, they want to win. They’re not going to just stand there and let somebody take the lead.”

Grooters can’t help but think the perfect season was almost taken away by COVID-19. She’s proud of all the schools’ efforts to make the season happen, including keeping the face protection on.

“I was so excited to coach them this year, but I was so nervous with the COVID stuff,” she said. “They wanted to play badly. They were worried they wouldn’t be able to.

“They want to be out on that court,” she continued. “Once we know we could practice and compete a little bit, it all fell into place.”

PHOTOS: (Top) Mackinaw City’s Ella House prepares to serve during a match against Alanson this fall. (Middle) Marlie Postula sets for her hitters; she led the team in serving, hitting and passing percentages this fall. (Photos by Izzy House.)