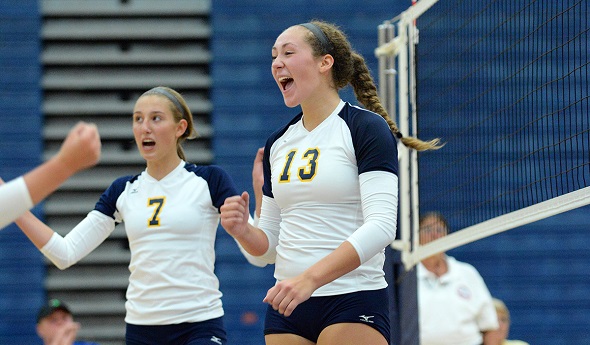 A rare freshman playing for one of mid-Michigan’s top programs, Nordmann played the middle, just like then-junior Abby Nakfoor – and Nakfoor figured out quickly that her younger teammate’s skill level was already far above her own.

But what Nakfoor also found about the new teammate she fondly called her “Baby Lex” no doubt has helped Nordmann turn into much more than another tall player standing in front of the net.

“She was still always open to my input, even though skill-wise she was a full head above me,” said Nakfoor, now a sophomore on the Ferris State University basketball team. “She’s so open to learning. As a freshman she’d get frustrated, and who doesn’t, but if she didn’t get something she was always texting me – ‘in practice, what would you run here; what should I do differently?’ – and that just comes from her eagerness to be a better player.”

“It sounds kinda dumb, but it’s like a mom thing. I’m so proud. I’d always call her my baby Lex, my baby freshman, and we’d always take pictures of me holding her, cradling her. But now … what she’s meant to that volleyball program, those girls look up to her so much.”

And for plenty of compelling reasons.

Nordmann is one of 10 candidates for this season’s Miss Volleyball Award sponsored by the Michigan Interscholastic Volleyball Coaches Association, and that means a little more than it might in other regions of the state. Not including Corunna’s Meredith Norris, who also is a finalist this season, the last mid-Michigan player to make the ballot was Lake Odessa Lakewood’s Chelsea Lake in 2010. Drawing closer the home, the last player from Lansing or its closest suburbs to be considered was East Lansing’s Heather Brooks in 2006.

Nordmann is 6-foot-1 with a vertical jump that allows her to touch above 10 feet. She’s powerful in the middle, no longer the “scrawny freshman” coach Christy Thelen brought up to varsity straight out of junior high. And her athleticism is drawn from a family tree that has included multiple generations of basketball stars including a grandfather who played in the NBA.

But the difference might be what sits above her ball-smashing shoulders. 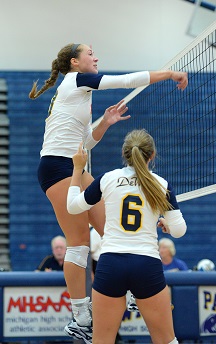 If she sees something wrong, she fixes it. And despite relatively limited experience on the volleyball court heading into high school, she picked up quickly a knowledge that combined with her intellect continues to give her an edge.

Nordmann already has accomplished much. She’s listed twice in the MHSAA record book; her 239 blocks last season rank third since the rally scoring era began with the 2004-05 season, and she had 39 kills – tied for sixth-most – in last season’s Class A Regional Final loss to Mattawan. Nordmann finished the season with 511 kills and a ridiculous .460 kill efficiency in helping DeWitt to a 44-4-1 record.

The Panthers are 16-0 this fall after winning the Mount Morris Invitational over the weekend, and Nordmann has had her share of impressive performances during the opening run. She had 67 kills with only eight errors over six matches at the Alma Invitational, where DeWitt defeated among others Class B No. 1 Lakewood, and she had 12 kills Wednesday against Mason despite facing triple blocks.

As noted, she’s from a basketball family. Her late grandfather Bob Nordmann played four seasons in the National Basketball Association as a 6-foot-10 center and later served as an assistant coach at Michigan State. Her dad Matt played at Navy and then George Washington University, while her uncle Eric played professionally overseas and her aunt Andrea Nordmann played college basketball at Bowling Green State.

Lexi didn’t take up volleyball until seventh grade, and didn’t take it up seriously until eighth, when she tried out for a club team in part to get a free T-shirt. Thelen, who teaches math at the junior high, knew more about Nordmann as a student – she took the advanced math class and was selected by teachers to go to Japan as part of an annual exchange program – but Nordmann then also showed enough potential to be brought up to varsity immediately after entering high school.

“Her knowledge of volleyball and understanding of blocks and the scheme of it, she’s probably one of the smartest kids I’ve ever coached,” said Thelen, in her ninth season coaching the varsity and a former all-state setter for the Panthers. “Understanding why we’re doing such things, why she should go here on a tip, those kinds of things; a lot of times you have to coach that a lot, and she just knows.”

Nordmann has grown only two inches in height since freshman year but tremendously in other ways. Nakfoor was a natural leader and Nordmann, admittedly, is naturally quieter. In fact, Nordmann sent her mentor a video last year of a postmatch interview they gave where Nakfoor answered all the questions while Nordmann nodded and added, in essence, “Yeah, what Abby said.” 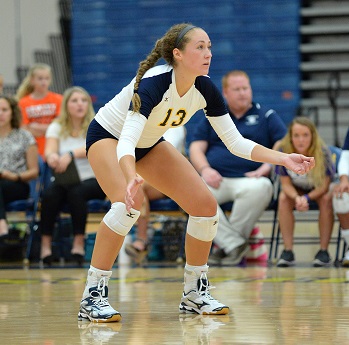 But Nordmann has taken on a leadership role since Nakfoor graduated, telling Thelen in part that on the court that she tries to do what Nakfoor would do, say what Nakfoor would say. And Nordmann has become a mentor as well for a number of younger players like sophomore middle Desiree Becker, another big-time player in the making.

“She’s grown leadership-wise, as a junior especially, and she’s just leading, showing the younger girls the ropes just how she had been shown the ropes. She has a much bigger voice now too,” Nakfoor said. “I have a cousin on the team right now (Bailey Yonkman) who looks up to Lexi a lot, and my little sister (Meredith) is in the program (and does too).”

Nordmann will play after high school at Southern Methodist University in Dallas, Texas, not far from where her aunt Andrea is an associate athletic director for compliance at Texas Christian University in Fort Worth.

Lexi is thinking about becoming an engineer, or she might study business. Then again, she took an Advanced Placement history class last year that she loved. “I do enjoy learning all different (subjects),” Nordmann said. “I’m still looking for that one that I’m passionate about.”

She’s got time to figure out her future, of course, and will have plenty of options given her academic mastery.

But athletically, she’s found her passion – and her place as DeWitt’s leader as well.

“In junior high, obviously I used to play basketball. Coming from that family, that’s what they did,” Nordmann said. “But the team aspect of volleyball is just so much more evident. After you get a point or your teammates get a point, there’s so much more excitement and momentum and there’s more coming together. That feeling of getting a block or a kill, or when your teammate gets a sweet dig, it’s so exhilarating. It pumps you up.”