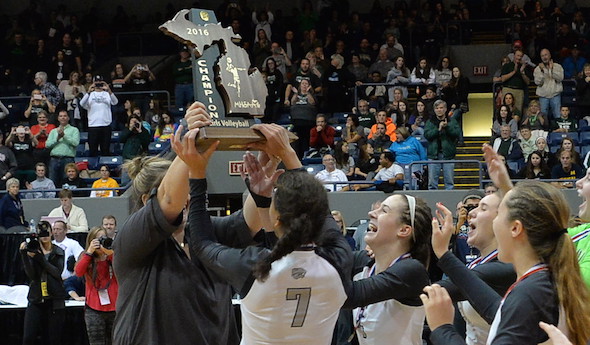 BATTLE CREEK – At the start of the second set Saturday, just like many times this season, Novi senior Ally Cummings stood surrounded on the court by teammates who still have another season of high school volleyball ahead of them.

During those rotations, Cummings was the only player on the floor who knew what it was like for the Wildcats to finish a season not in the Class A championship match.

They played in their third straight Saturday, and as it should be, against one of their toughest opponents this fall in Rockford. But that made Novi only enjoy the afternoon more, as it won its second straight championship by downing the Rams 3-1.

Adding in this fall’s 53-1 record, the Wildcats are 158-10 over the last three seasons. Cummings, senior Emmy Robinson and junior Erin O’Leary have been the lineup’s constants throughout the run.

“It just really comes down to the chemistry on the team,” Cummings said. “If you have an amazing team with amazing players, but the chemistry is off, you’re not going to be successful. The past four years I’ve played here, it’s been like family for us. So I’m sure even when I graduate, and these people start to graduate as well, it’s still going to be as successful.”

Novi – top-ranked entering the postseason for the second year in a row – talks about creating its own pressure and blocking out the “outside noise” of others’ expectations.

Trying to match this season’s success would be an impressive goal.

The lone loss was to No. 2 Clarkston, 2-1, and the Wildcats gave up only seven sets this season – including the second of the championship match to Rockford. Only No. 6 Northville in the District Final also took a set from Novi during the postseason.

“It’s overwhelming. (This success is) not something that you ever expect, not something that we ever really talk about,” Cottrill said. “We just try to stay in the moment. But if you take a step back, it’s amazing, and it’s all because of the players in the program who have changed the culture and have tremendous leadership skills, expectations of themselves and their teammates … and we’re a family.

“We love each other, from top to bottom, and we like to win. So that motivates you to keep winning, when you have that success.”

But Rockford didn't make adding to it easy Saturday. 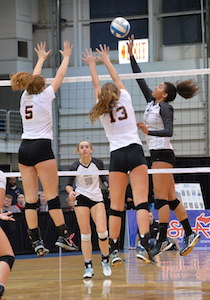 “I think we are just a good team, and we are a very well-balanced team. Five good hitters and we play good defense, and I think we did a good job of blocking today as well,” said Rockford coach Kelly Delacher, also Hailey’s dad.

In Cannon, O’Leary and Hailey Delacher, the Class A Final may have featured three candidates for next year’s Miss Volleyball Award – while setting up the potential for another narrative twist.

Novi faced Romeo in the 2014 Final and then again in 2015, losing the first time but winning the rematch. With both of Saturday’s finalists expected to return so much next fall, it wouldn’t be shocking to see them meet again with the championship on the line.

Combined, the teams graduate only nine seniors – five for Novi and four from Rockford.

“Those seniors provided us with great leadership, and we really got on their backs at the end of the season this year. They will be tough to replace,” Kelly Delacher said. “That being said, I have a great group of juniors and I’m excited about a couple of sophomores coming in. I feel like we can be competitive next year as well.”

Novi will be prepared.

“All they know is pressure. All they’ve known is that target on your back, everyone coming for you, you get everyone’s best game,” Cottrill said of her team. “So you get used to it, and you get stronger mentally playing with a target on your back. I’m not saying it’s easy. But you get accustomed to it.”

PHOTOS: (Top) Novi coach Jennifer Cottrill hoists the Class A championship trophy as her players surround her Saturday. (Middle) The Wildcats' Abryanna Cannon attempts to tip the ball over the net with Rockford's Olivia Rademacher (5) and Zoe Anderson (13) defending.