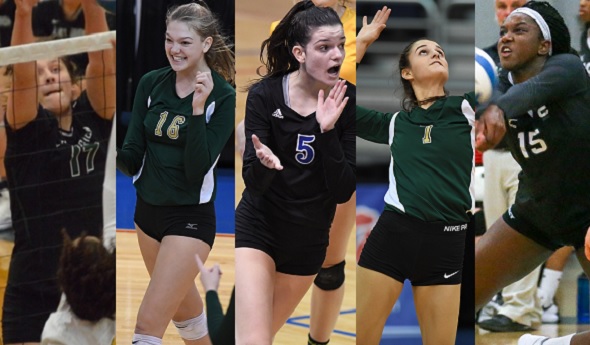 Pontiac Notre Dame Prep capped the first fall volleyball season in MHSAA history in 2007 with a Class B championship – the first won in any class by an Oakland County high school. Bloomfield Hills Marian in Class A and Birmingham Roeper in Class D also reached Finals that fall.

Before that season, teams from the county had reached title matches just six times since 1975-76, when the MHSAA began sponsoring a postseason tournament for the sport. (Volleyball began as a winter sport and moved to fall for the 2007-08 school year.) But since Notre Dame won its 2007 title, Oakland County teams have won seven more MHSAA championships: Notre Dame Prep two more in Class B, Marian two in Class A, and Novi – led by 2017 Miss Volleyball Award winner Erin O’Leary – won the last three Class A titles.

Which leads us to this season. Of the 10 nominees for Miss Volleyball, an unprecedented five are from Oakland County: Lake Orion’s Paige Briggs, Pontiac Notre Dame Prep’s Maddy Chinn and Natalie Risi, Bloomfield Hills Marian’s Madison Dowd and Troy’s Jessica Robinson. Of the top four vote-getters for last season’s award, three were from Oakland County.

Chinn and Risi’s coach, Betty Wroubel, who is third on the all-time list for coaching victories (1,422 before this season), said there are a number of reasons why teams in her county are competing at a higher level recently.

“For a long time the programs on the west side were way ahead of us,” Wroubel said. “Some of it is travel (teams). But much of it is competition. In July we do a camp to get the players in the area more involved. Marian led the way for so long, and others are catching up. Also, the kids are getting taller. They’re stronger. Schools in the area offer more conditioning for the players.”

Before this season, Notre Dame Prep had three past candidates for Miss Volleyball. In the fall of 2007, Molly (Coldren) Campbell finished second in the voting to Kyndra Abron of Livonia Churchill. Four years ago, Katherine Carlson became the first and only Notre Dame Prep player to win the award.

Wroubel said both Chinn and Risi stack up well when compared to the other fine players who have come through her program.

“(Maddy) has something going,” Wroubel said. “In those big moments, when your team needs it, she thrives. When the game is on the line, she’s there. She understands the game, like a coach does. What she’s improved on is hitting a variety of shots. She can put the ball down. Even as a freshman, she had that ability.”

At 6-foot-3, Chinn, an outside hitter, is a dominant player at the net. Risi’s versatility sets her apart from the competition. At 6 foot, she also is positioned as an outside hitter – and this season she’s also become one of the team’s top setters.

“Natalie is a calming force,” Wroubel said. “She could be a setter on any team. She’s quiet. You won’t notice her on the court sometimes. When you do take notice, you can’t take your eyes off of her. She’s so smooth.

“I feel bad that they’re in the same class. I don’t know who I’m going to vote for.”

Statistically, Chinn has impressed with 446 kills and 96 blocks. Risi has 140 aces with a .430 hitting percentage. Risi’s aces already make the MHSAA single-season record book list in that category, and Chinn is on pace to make the kills list.

Mayssa Cook is in her first season as head coach at Marian and her setter, Madison Dowd, is a nominee. Cook played volleyball at Dearborn High before graduating in 2003 and playing four years in college, the last two at Wayne State. Cook began coaching the freshmen team at Dearborn a year after graduating from high school. She built the program at Ann Arbor Gabriel Richard as she guided the Irish to a District title in 2013, her first season as head coach, and the school’s first Regional title the next season – before Gabriel Richard then won the Class B title in 2015 with a perfect 42-0 record. Cook (her maiden name is Bazzi) left Gabriel Richard after 2016 and took off from coaching as she gave birth to her first child.

Cook has seen the game change dramatically since the early 2000s. She was a three-sport athlete for the Pioneers, and even though she was a fine player, she said she’s not sure she would make varsity now with the skill set she possessed then.

“Ten years ago, many schools on this side of the state would go to the west side to get competition. It’s a lot more balanced now. There are still great teams over there, but we don’t have to travel three hours to play the good teams. We can go 10 minutes.”

Dowd, a four-year varsity player and a two-year captain, typifies a well-rounded student-athlete. She has a 4.2 grade-point average, and on the court not only is she a fine player but a valuable teammate. She has 808 assists and 217 digs, and her 1,531 assists as a junior rank ninth in MHSAA history.

“A lot of it has to do with her personality,” Cook said. “She’s not the loudest person on the court. She has a calming presence. She leads by example and is that player who makes her teammates better.”

Dowd has received a number of scholarship offers for volleyball but has yet to decide where she will go after this school year is done.

Over the years Marian has had a host of players nominated for Miss Volleyball, which was created in 2003. That season Erin Poglits was the first Marian player to make the list. Alexandra Cocklin was named Miss Volleyball in 2009 and her teammate, Rachel Charles, was second in the voting. The next season Marian’s Alexandra Lovell finished second and her teammate, Alessandra Dietz, was fourth. Before this season, somewhat surprisingly, the last Marian player to make the top 10 was Jessie Kopmeyer in 2013.

Jessica Robinson (6-2) from Troy and Paige Briggs (5-10) from Lake Orion also are accomplished outside hitters.

Robinson is the first player from Troy to be a nominee and entering this season she had 1,174 kills and 588 digs for her career. She had 740 kills as a junior to rank among the most successful single-season hitters in state volleyball history.

“In college (Robinson has committed to University of Michigan), she’ll be a middle hitter,” said Troy coach Tom Vigilant. “But for us, we have her on the outside. She plays all around. If I need an attacker on the back, I can go to her. But she does what she does best, and that’s at the net.”

Lake Orion’s only other nominee, Courtney Wightman, came in 2015. Lake Orion is one of those Oakland County programs that has made significant strides in the past decade. Its 2011 team reached the Class A Final before losing to Rockford.

Briggs suffered a back injury last season, which limited her effectiveness. Lake Orion coach Tony Scavarda said she has fully recovered and helped make the Dragons one of the top teams in the county.

“She’s made a huge impact for us,” he said. “She passes from the back row, plays good defense and she’s got good leaping ability. She does everything well. At 5-10, she jumps really well and is smart with the ball. We have other players her size who can’t do what she does.”

Briggs is close behind Chinn with 444 kills and is among the leaders in digs with 340. She’s also on pace to make the single-season kills record book list.

Lake Orion lost to Clarkston in the District last season, but with a healthy Briggs the Dragons are off to a 41-4 start and looking for their first District title since 2015.

Scavarda, in his fifth season as head coach, said it is a bit surprising to have five players from the same county in the running for Miss Volleyball, but adds that it is another indication of how strong the level of play has been in Oakland County over the last decade.

“Oakland County is always pretty strong,” he said. “Clarkston is always good, and they might be a little down this season but not by much. Marian and (Farmington Hills) Mercy are always good, too.”

Tom Markowski is a contributing writer for the State Champs! Sports Network. He previously covered primarily high school sports for the The Detroit News from 1984-2014, focusing on the Detroit area and contributing to statewide coverage of football and basketball. Contact him at tmarkowski@statechampsnetwork.com with story ideas for Oakland, Macomb and Wayne counties.