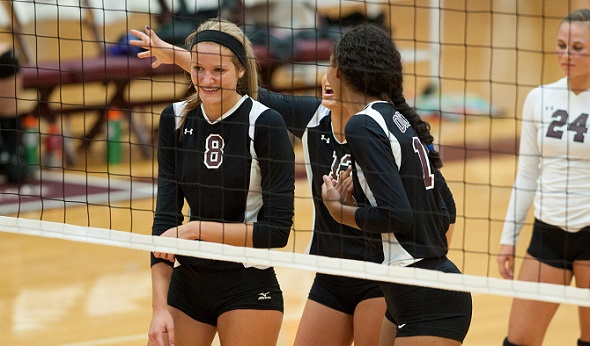 OKEMOS – Daria Richards and Rachel Thomas always are partners when Okemos’ volleyball team lines up for drills, and always on opposite teams when the Chiefs split up to scrimmage.

Who better to match up than a pair of 6-foot-2 hitters who tower above their teammates and rise above the net with ease – and don’t mind giving each other a little verbal spike to keep things light?

During a blocking drill last week, they “got feisty with each other,” as Thomas put it – nothing serious, just a few “are you going to get that next times” after smashes found the floor, and Richards teasingly complimenting Thomas’ diving skill after the latter’s lunge came up empty.

“I think we push each other. We mess with each other, as in I’ll give her grief for something and then she’ll do it right back at me,” Richards said. “We’re joking, but at the same time, it’s like, I’m not going to mess up again.”

“I think we have similar personalities too, like (with making) sarcastic comments,” Thomas added. “We’re kinda quiet at first. But once you get to know us, we’re not.”

A growing number of teams all over the Lower Peninsula are getting to know Okemos volleyball again this fall – thanks to the noise Thomas and Richards are making at the net.

The Chiefs have opened 13-5 heading into this weekend’s Portage Northern Invitational, the latest on a tournament schedule that’s stretched nearly from Lake Michigan to Lake Huron and included opponents from Traverse City to just north of the Ohio border.

Richards and Thomas are two of only four seniors on the team, but also young enough to know nothing about the last time their program made a serious run in Class A – in 2002-03, when assistant coach Allison Ianni was the setter and they were starting elementary school.

Okemos made its second straight MHSAA Quarterfinal appearance that season, and only three Lansing-area schools have advanced that far (and no farther) in Class A since – which hasn’t done much to steer statewide volleyball eyes away from the usual powerhouses in Battle Creek and suburban Grand Rapids and Detroit.

But this Chiefs duo isn’t a secret, at least not to possible tournament opponents, having played offseason ball with players from Class A runner-up Lake Orion and champion Romeo, including Miss Volleyball favorite Gia Milana.

Richards, playing in the middle, had 93 kills with a hitting percentage of .422 heading into Wednesday’s match against Jackson, and also averages 1.5 blocks per game. Thomas, from the right side after playing middle as a junior, hits at a .397 clip and averages 1.1 blocks, and may be the team’s top passer as well.

Both Richards and Thomas made headlines over the last year with future commitments – Richards will sign a letter of intent to play at Baylor University and Thomas will sign with Tennessee Tech. 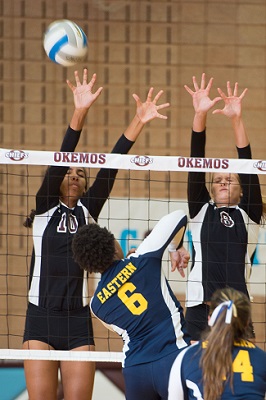 But the common ground goes past witty comments and athletic prowess – and at least a few details likely contribute to their cohesiveness in leading the Okemos attack.

They both used to play the violin, both taking it up in fifth grade. They spend a lot of time in the same classes, many of the toughest ones at a strong academic school, and with grades to show – Richards has a 3.9 grade-point average and Thomas comes in at 3.5.

They both have one sibling, although Thomas has a brother and Richards a sister. And though they run in different circles they are close friends on their own – although they didn’t really know each other until meeting on the volleyball court during eighth grade.

Richards was destined to play this game, following her older sister of two years Jessica, who started for the Chieftains through graduation – and with whom Daria already was competing with as a sixth grader, trying to match accomplishments in volleyball and high jump.

Thomas took just a bit longer to find her niche. She played basketball as a seventh grader, when varsity coach Jamie Ianni – who taught both girls in junior high physical education class (and also is Allison’s mom) – told Thomas’ mother that Rachel should play volleyball too. She gave it a try that winter, and it became her favorite sport.

Both started on varsity as sophomores, and the coach knew she had something special in the making.

“I don’t really look forward to anybody’s senior year, because it’s like, ‘Oh, I love these kids,’” Ianni said. “But they’re very special, the two together, (or) separate. They’re like twins. They wear the same thing. The same things come out of their mouths … much like a sister or a twin.”

And they’ve both learned plenty of lessons over the last two seasons they expect to pay off when tournament time begins.

Okemos finished a respectable 23-13-1 last season and second in the Capital Area Activities Conference Blue before losing in the MHSAA District Semifinal to Class A honorable mention DeWitt.

But outside of mid-Michigan, few had taken note of the Chiefs’ potential. 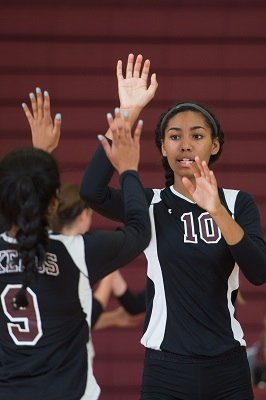 But this fall has been different from the start. Thomas made her college decision at the end of last fall and Richards followed with hers at the end of winter, and word was getting around that the Chiefs had two Division I college hitters as they took the floor Aug. 22 at the Ann Arbor Pioneer Invitational.

Richards admits that rising profile has brought out the best in some opponents. But it’s also been rewarding to recall how far the pair has come since playing junior varsity together as freshmen, and they both are quick to point out the other’s strengths:

Thomas on Richards: “She’s good at either getting a kill when it’s needed or a block for a game changer, to change the momentum. She’s always positive, and she encourages others. She has a positive vibe, so it’s easy to play with her.”

Added Ianni: “We use them both all the way around. They’re weapons on the court. It’s hard to pull them off.”

When Okemos won that last MHSAA Regional title in 2003, Allison Ianni (who went on to play at University of Pacific and Michigan State) set for a pair of future college hitters. She and teammate Amanda Amon, both 6-2 as well, were coined by another coach as the “Great Wall of Okemos.”

The wall appears rebuilt in Thomas and Richards, who despite their bright futures are focused on the now and turning some of that spotlight back toward the center of the state.

“I love it when there’s a big crowd. We do a lot better when there are people watching. Not to show off in front of them, but it’s exciting when you have people cheering you on,” Richards said.

“I think we could easily make a name for ourselves by beating one of those big schools. It’s always better to be the underdog because you have nothing to lose. That’s always cool when you play those teams, because nobody knows (you), like ‘Hey, who is this team? Where are they from?’”