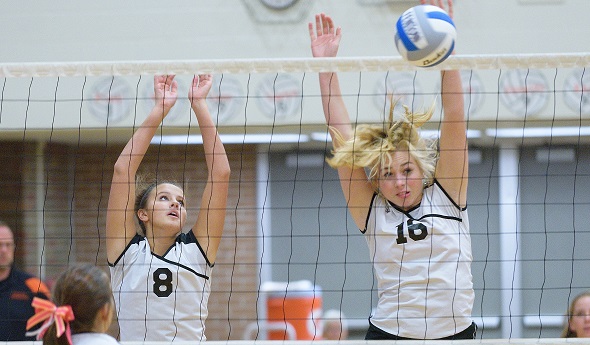 Despite entering the postseason with only five losses, Fenton was unranked in the final Class A poll – but the Tigers have made their presence felt over the last three weeks, and especially by defeating No. 10 Utica Eisenhower and then No. 2 Clarkston in last week’s Regional. Leading the way was 5-foot-11 outside hitter Idoni, who tallied 24 kills and 16 digs against Eisenhower and 32 kills against the Wolves to earn the Michigan National Guard “Performance of the Week.”

Fenton has since advanced to its first MHSAA Semifinal since 1992 as Idoni had 12 kills and 15 digs in Tuesday’s five-set Quarterfinal win over Midland that improved the Tigers to 46-5-3 this fall. She started at middle hitter as a freshman and this season until sliding outside before Districts began. That move has opened up more opportunities for her to make an impact; she's second on her team with 445 kills while leading with a .390 hitting percentage. She also leads with 108 blocks, 64 aces and is among top defenders on the team with 255 digs.

Idoni was a standout on the varsity basketball team that finished 18-7 and won a District title last winter, earning all-area honorable mention from the Flint Journal. She also played junior varsity soccer as a freshman, but is considering participating in track & field next spring; she was a high jumper in middle school and might do that event and throws. In addition, Idoni is a strong student – she carries a 3.9 grade-point average – and already is considering studying for a career in sports medicine when high school is done.

Coach Jerry Eisinger said: “As a freshman, it was pretty obvious that she is a very special talent. Last year and for much of this year, Chloe was a middle hitter for our team. And she was very dominant at that position, with powerful kills and strong blocking. But being in the middle, we were limited as to how much we could get her the ball. Later in this season we moved Chloe to outside hitter, where we could get her the ball more regularly, and since that time she has really become a force. It goes beyond the powerful kills. She has excellent court presence and knows when to tip and when to hit. Her defensive skills are also impressive as she has become one of our better passers and is a very good six-position player. Lastly, her attitude is a big reason for her success. Looking at her, you would never know if she is struggling or dominating, except for her “kill celebration.” Her competitive attitude and court maturity goes way beyond her age.”

Performance Point: “I knew our team could do it if we played together, played with heart, and we played together and accomplished our goal,” Idoni said. “I love being the underdog, not expected to win, because you don’t have all this pressure. You go out and give it your all, and as long as you give it your all you don’t have anything to look down on yourselves. … We knew (Clarkston) had an amazing team. They were ranked number 2 and we weren’t even ranked.  We just have to play it play-by-play, do our thing and never give up. After the first (set), it just filled our confidence up. If we beat them once, there was no reason we couldn’t beat them again.”

Making the move: “I was a middle and got moved outside; I like it better. It gives me more opportunities, and I got to play all around recently too. I was an outside hitter for a couple of years until I moved to middle, so I had experience with it. I knew I’d be OK with it. … (And) I’ve been playing with Kiley (Aldred) my setter a really long time in travel volleyball, so we’ve had chemistry for a long time.”

Celebrate: “I have a lot of energy on the court, so when I get a kill I like to celebrate a lot, give my team more energy because it helps on the next play. Our cheer celebration, we don’t have a specific one. We just go to the middle and scream and yell.” 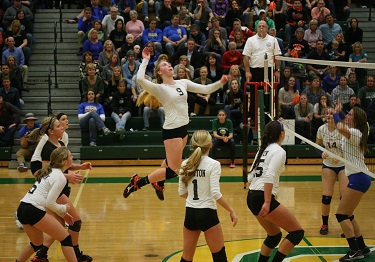 Whatever is in season: “(My favorite sport) really depends on the season. Right now, my favorite is volleyball in a way, but things change in basketball season. I go back and forth. In volleyball (I like that) you get to celebrate more with your team (after a point) instead of having to go right back on defense.”

Underclassmen can lead, too: “I like to try to be the best leader I can be for both teams. I help out my teams the best I can, to have more energy, get more excited and never get down on themselves. Most underclassmen might be a little intimidated, but I was never intimidated. I have lots of upperclassmen friends that I knew for a long time, and they’re all nice people, great teammates.”

PHOTOS: (Top) Fenton's Chloe Idoni (right) puts up a block during a match against Clio in 2015. (Middle) Idoni prepares to swing during Tuesday's Quarterfinal win over Midland. (Photos by Mark Bolen and David Troppens/Tri-City Times.)