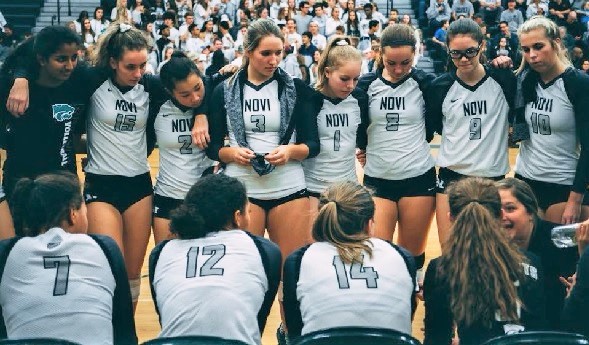 NOVI – Eleven months ago, after Novi had won its second consecutive MHSAA Class A title, those in the volleyball community fully expected the Wildcats to easily make it a three-peat in 2017.

And why not? Novi won its second straight championship in a four-set victory over Rockford in the Final, and coach Jen Cottrill had nine seniors returning led by two of the state’s top players in setter Erin O’Leary and outside hitter Abryanna Cannon.

Those close to the sport, and the program, agreed that this team had more talent – and coupled with the experience, a third title would be a breeze.

But the world of sports, especially at the high school level, isn’t so predictable. It’s part of the allure of athletics. Each season, each game, is laced with unknown factors.

And so it was for the Wildcats. During tryouts Cannon suffered a sprained ankle, which forced her to miss much of the early part of the season. Soon after senior Kathryn Ellison, another outside hitter, suffered a shoulder injury. Midseason, senior middle hitter Savanna Frick suffered a concussion. And shortly thereafter Jaeda Porter, a junior who plays middle as well, suffered a high ankle sprain.

Those injuries caused frequent changes to the rotation that often had players playing out of position.

“We went through some changes, having four starters out at one time,” Cottrill said. “We were also dealing with a lot of pressure. People expect you to win. You get everyone trying to take you down. Just because you have talented players doesn’t mean you’re going to win. We’re fortunate that the top players we have are humble.”

Cottrill has all of her players back, and the No. 2-ranked Wildcats (53-3) are playing at a high level. They defeated No. 9 Northville in the District Final in straight sets and Walled Lake Central, also in straight sets, in a Regional Semifinal on Tuesday at Dexter. Novi will play South Lyon in a Regional Final on Thursday, also at Dexter, at 7 p.m.

The best of the best for Novi are O’Leary and Cannon, both of whom are among the 10 finalists for the state coaches association Miss Volleyball Award. O’Leary signed with University of Michigan on Wednesday; Cannon with Northwestern.

Cannon, a transfer from Traverse City West, moved to Novi after her sophomore season and has proven to be an important piece to the puzzle. She had a match-high 20 kills in last season’s championship match win. Ellison and Porter also played major roles in that trip to Kellogg.

O’Leary has been directing the attack from the start Novi’s rise, and she’s from a family where athletics are engrained. Her father, Brian O’Leary, was the soccer coach at Novi and her brother, Connor, was an all-state soccer player for the Wildcats who is now competing for Grand Valley State’s club team. Brian O’Leary was at Novi when the program won the school’s only MHSAA boys soccer title (Division 1 in 1998).

Erin O’Leary, a four-year starter, said she and her teammates are playing as well as they have all season and, in an odd way, the early-season injuries have been a blessing.

“This has been a different season than the other ones,” O’Leary said. “The other seasons we hadn’t faced much adversity. We were great in the beginning and we were great at the end. After the injuries, ultimately, looking back, the experiences were good for us. Now we’re better. We talk about being competitive in practice. Other players had to step up their game. Having everyone on the team playing helps elevate everyone’s game.”

O’Leary is quite the talent, on the court and in the classroom. She was named the state’s Gatorade Player of the Year as a junior and is considered one of the top players nationally while also playing club for Legacy, coached by Rick Cottrill, Jen’s husband. O’Leary played for USA Volleyball’s Youth National Team in 2016.

She also carries a 4.2 grade-point average and is expected to graduate early and enroll at U-M in January.

Few Class A teams have enjoyed the success Novi has had recently. The Wildcats lost in the 2014 Final to Romeo before winning the title the past two seasons. Should they capture a third consecutive title later this month, they would be the first Class A team since Portage Northern in the mid-1990s to win three straight. 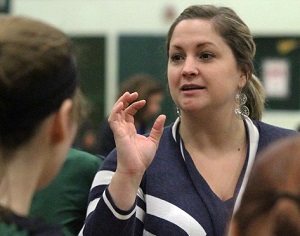 This is Cottrill’s sixth season at Novi. She coached at Pinckney (seven seasons) and White Lake Lakeland (three) before coming to Novi. She’s taken nothing for granted. It’s been a coach’s dream to guide so many fine athletes during such a brief period.

“Being in a public school system, you go in cycles,” she said. “What you do (with talented players) is up to you. Erin was playing at a high level in the seventh grade. She was the star. We’ve been able to build (a team) around her.

“The system cultivates success. How to be disciplined. To remain humble. We spend a lot of time on leadership, talking about what it takes to be a leader. If they are leading a group, we want them to focus on the right things, the right direction to take.

“The goal when you’re coaching is not winning. We focus on making the girls better women. To be a great employee, a great wife, a great mother.

“In 2014 we did pull a rabbit out of the hat. We didn’t have any Division I players (in the senior class). You take a lot of joy seeing the girls work hard and being rewarded for that. There’s nothing more gratifying for a coach that to see them grow as a person.”