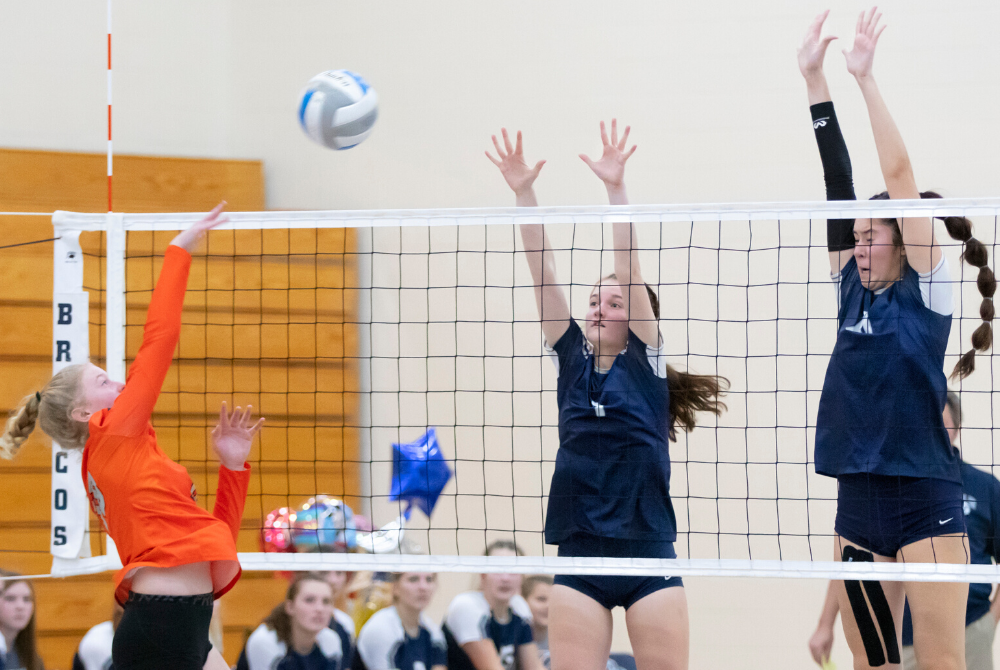 The thought of the North Branch volleyball program being ahead of schedule when it comes to success is difficult to fathom.

North Branch has been among the top programs in the state for 15 years, including an incredible 10-year run that included eight trips to the MHSAA Semifinals, four runner-up finishes and three Class B Finals titles (2009, 2014 and 2016).

The Broncos have won 17 straight District titles and are 53-0 over four seasons as members of the Blue Water Area Conference. They have arrived, and stuck around.

But this year’s results and roster indicate even more success is on the way, and it could be happening very soon.

“I wouldn’t even know what to think about it, to be honest with you,” North Branch’s lone senior, Gracie Hyde, said of the possibility of getting back to the MHSAA Finals this season. “I guess it would be shocking because we’re such a young team.”

Half of North Branch’s 16 players are sophomores, and when you add in the two freshmen, underclassmen make up the majority of the team. Despite that, the Broncos are 42-8 heading into the Regional tournament, which begins Tuesday night in Mount Morris, and they didn’t drop a set in conference play. The eight losses came almost exclusively to ranked teams, and the only losses outside of Division 1 were to the No. 1 (Pontiac Notre Dame Prep) and No. 3 (Detroit Country Day) teams in Division 2.

“I knew we’d have a really good team, but we’re still very, very young,” North Branch coach Jim Fish said. “Many times, we’ll have five sophomores on the floor at the same time, but they’re so skilled that I don’t even look at them like that. We’ve won three state titles, but this will be my most talented team. Next year, we’ll be extremely talented. Now, that doesn’t mean that we’re going to win anything.”

The key stat leaders for the Broncos are almost exclusively from the Class of 2024. Three sophomores – Alana Deshetsky (first with 287 kills), Clara Gyomory (third with 216) and Kaela Chingwa (fourth with 182) – are among the team’s top four attackers. Chingwa leads the team in blocks with 97, Haily Green leads the team in digs with 720, and Adrienne Greschaw leads the team in assists with 1,043.

Add in junior attackers Bailey Gormley (264 kills) and Natasha Bickel (177), and Hyde’s defensive prowess and skill at the service line (92.1 percent success, 88 aces), and the Broncos are every bit the threat their No. 5 ranking in Division 2 would suggest.

“I definitely think we’re ahead of schedule,” Deshetsky said. “We had a couple bumps in the road, like injuries and girls being sick, but we have five great hitters on our team, and you can’t just shut down one girl.”

For the players, the speed of the success may come as a bit of a surprise, but it’s something they’ve long thought was possible.

“We’ve always known that the grade below me and our grade has always worked well together,” Bickel said. “We grew up playing AAU ball, and watching them all grow has been amazing. We've all improved so much through the years.”

As they came up through the youth ranks in North Branch, they not only grew together, but also watched as Fish’s program was, for the most part, dominant. He took over in 2000, one year after the Broncos had won a single match, and well before any of the current players were born. 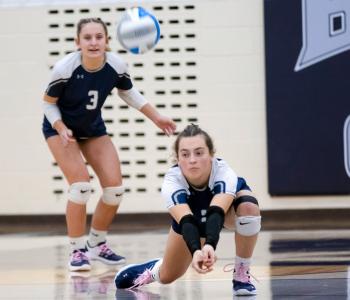 The District win streak began in 2006, and by 2007, North Branch had made its way to the Class A Finals weekend, starting the 10-year stretch of consistent trips to Battle Creek.

“They were like my idols,” Bickel said. “I always loved watching them play. Coach asked me to be a ball girl when I was in the fifth or sixth grade, and it was like a dream come true.”

While the program has remained strong, 2016 was the last time North Branch won a Regional title, with Notre Dame Prep ending its season each of the past four years in the Regional Final. The 2020 team was the first since 2007 that didn’t feature at least one player who had played in the Semifinals.

Last year, with multiple freshmen on the floor, the Broncos came as close as they have in the past four years to knocking off the Irish, losing 16-14 in the fifth set to end the season. Now, they find themselves on the opposite side of the Division 2 bracket from Notre Dame Prep, and if they were to meet again, it would be in the Final.

“I want to get there so bad,” Green said. “Last year, in the Regional Final, that game was so much fun. I keep thinking that I want to get back to a game like that.”

There’s plenty of work left for both teams to do in order to make that happen, but Fish does know that getting to Battle Creek this year, even if it doesn’t result in a title, would help put the program on schedule to accomplish its goals in the near future.

“Nobody has been down there,” he said. “They’ve seen their sisters play there, and they’ve seen pictures and heard about it, but it’s really important to get down there. If we can get there and compete – I'm not going to say never, because why not us – but, realistically, if we can just get there, that will really fuel their desire to get back.”