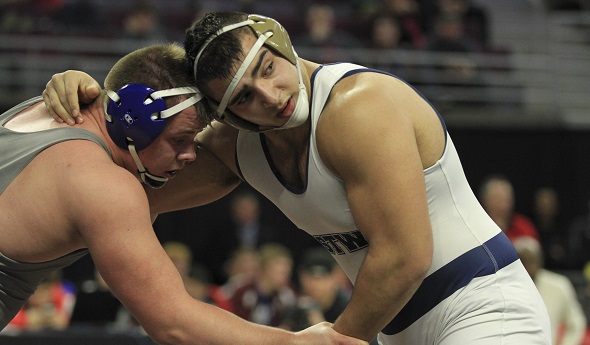 Often, the most intriguing bouts heading into a weekend of wrestling at The Palace of Auburn Hills are scheduled somewhere in the middle weights.

But this weekend, arguably the best matchup could come in a rematch among the heaviest competitors in Division 1.

Keep an eye out for returning finalists Dan Perry of Lapeer and Ali Wahab of Dearborn Heights Crestwood locking up again at 285 pounds after Perry won 3-2 in last season's championship match to finish undefeated and hand Wahab his only loss of 2014-15.

They are two of 10 contenders we’ve broken out below among many to watch this weekend at the Division 1 Individual Finals. Follow all the matches beginning with Thursday's first round on a subscription basis live on MHSAA.TV, and click here for results at MHSAA.com. And come back to Second Half this weekend as we’ll interview all 14 title winners.

112: Max Johnson, Davison senior (27-0) – The champion at this weight in 2014 slid to fifth last season, but he’s coming off helping Davison to the team runner-up finish last weekend and is considered the favorite again.

119: AJ Facundo, Davison sophomore (28-9) – Last season’s champion at 112 might have a few more losses than other contenders, but he was one of the few to win all three of his matches at last weekend’s Team Final and beat an equally-impressive field to emerge a year ago.

135: Ben Freeman, Walled Lake Central junior (38-0) – Last season’s champion at 125 has only one high school loss, which came when he was a freshman and still went on to win the Division 1 title at 103.

140: Dylan Steward, Grand Ledge senior (45-1) – Steward won the Division 1 championship at this weight last season despite a loss at his Regional, and his loss this season came in December to another reigning champion, Dresden Simon of Dansville.

145: Nathan Atienza, Livonia Franklin junior (53-0) – Atienza may have surprised only a bit last season reaching the 140 Final with four losses, but he’s the top seed and favorite this time around.

160: Blake Montrie, Temperance Bedford senior (47-1) – After winning the championship at 152 last season, in overtime, Montrie has again lost only once, to Dundee’s Sean Sterling in December.

215: Luke Ready, Brighton senior (37-1) – The reigning champion at this weight is also, predictably, the top seed this time and is the only competitor at his weight with fewer than three losses.

285: Dan Perry, Lapeer senior (50-2) – As noted above, Perry won one of the most exciting matches of the 2015 Finals and can expect something similar in his final high school match before continuing at University of Michigan next season.

285 – Ali Wahab, Dearborn Heights Crestwood senior (57-0) – He fell to Perry in last season’s Final only 3-2, and it was his only loss of the season; Wahab can finish with a little revenge on his way to continuing his career at Old Dominion.