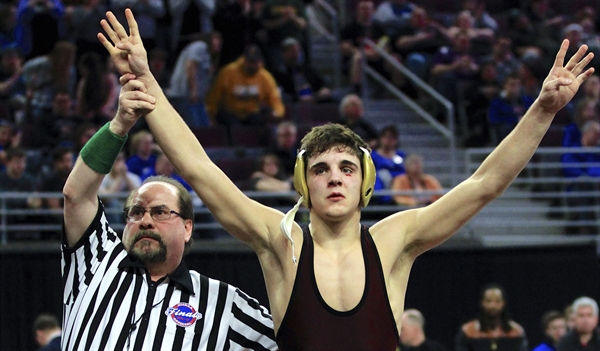 By Nick Hankins
Special for Second Half

AUBURN HILLS – It takes many people and a lot of time to build a legend.

That’s why Lincoln Olson was so quick to hand out credit for the incredible feat he accomplished Saturday night at The Palace of Auburn Hills.

“I feel ecstatic right now,” Olson said. “This is something I have been working for my whole life. I am so grateful for all the people who have helped me get here. My coaches (Roy Hall and Paul Donahoe) and my father, I wouldn’t be the wrestler I am without them. They mean the world to me, they gave me everything I needed to achieve this goal. All my coaches have been by my side this whole journey.”

“That has been my philosophy my whole life. I know I have a gas tank and a motor, and my conditioning I have been working on my whole life,” Olson said.  “That really separates me from other guys; that third period when they are tired, I just keep going.”

Mars got a little revenge, and won an MHSAA title along the way.

He beat Weaver 8-4 to win his first Finals championship.

“This feels unbelievable,” Mars said  “I knew he was going to be tough to beat.  He beat me the last time we wrestled at the beginning of the season. I worked hard all year to win a championship.”

But both wrestled in the MHSAA tournament and qualified for the Finals.

And when Johnson was upset in the Semifinal round by Rivera-Garcia, Facundo came back and avenged Johnson’s loss with a 9-4 win.

“It is awesome,” Facundo said. “It is such a rush to be a state champion. My dad and coaches put in a lot of hard work to get me to this point. I just stayed aggressive and rough to push the pace and win.”

It’s always great to end your career a winner. That’s what Gonser did by beating Hazelton for his 56th win of the year and first MHSAA title.

“I feel great about that match,” Gonser said. “This is a great end to my high school career. It has not hit me yet, but I am very excited to be a state champ.

“Last night I was in bed looking at the ceiling and said ‘God, I’m in the Finals.’ I don’t think this has all hit me yet. ”

Sometime winning your second MHSAA title can be harder than earning your first.

Walled Lake Central sophomore Ben Freeman felt that this year, but came through with a hard-fought win over Riley.

“This is an awesome feeling,” Freeman said “It feels like a weight was lifted off my shoulders. I have been working all year to win this title. I deserve to win this title because of all the sacrifices I have made.”

Zdebski won his second title Saturday, but admitted afterward that it wasn’t easy, on the mat, or in his stomach.

“It is extremely nerve-wracking wrestling in the Finals,” Zdebski said. ”I was able to turn that pressure and nervousness and turn it into fuel to get it done. What more could I ask for, to cap off my senior season with a state championship!”

Sometime a loss earlier in the MHSAA tournament can act as motivation as the tournament moves on.

That was the case for Grand Ledge junior Dylan Steward.

“Nobody was going to stop me from winning a state title,” Steward said. “I lost at Regionals and worked hard to get that title.”

Steward won two of his matches at the Finals by major decision.

Many coaches say to their wrestlers that they need to wrestle a full six minutes.

For Lapeer senior Dillon Ellsworth, he needed to wrestle a full nine minutes to beat Parks in the ultimate tiebreaker.

“I feel pretty good,” Ellsworth said. “I tried to push the pace of that match. It is pretty cool I got to win it my senior year and go out with a win at The Palace.”

Montrie went for it all in overtime, and it paid off as he threw Grimsley in a head-and-arm for the sudden victory.

“This is the greatest moment of my life,” Montrie said. “It’s a privilege to have my father in the corner and share this moment with him.

“I beat Grimsley at Grappler Fall Classic this year and I stuck with the same game plan to win a state championship.”

Amine was a little surprised by his opponent.

Dawkins came after the returning MHSAA champion and pushed him – until Amine held off the challenge and claimed the sudden victory on a technical violation.

“It is very exciting to win two state championship,” Amine said. “When I came to Catholic Central, I never dreamed of having this much success as a team or individual. It is really special to have my family share this with me.”

There is a lot of hard work and pressure that goes in every MHSAA championship, but Brighton’s Nicholas Brish said he had some fun. He won his first title with a 5-2

“I have had a fun year going after it this year,” Brish said. “Coach (Tony) Greathouse always tells us to push the pace in our matches, so that is what I did for six minutes.

“It has been the greatest season ever for me, and this weekend ended on a great note.”

Sovel made his first MHSAA Finals only last season, earning a seventh place in his debut.

But Saturday, he closed his high school career with a memorable finish.

“I finally got it,” Sovel said. “I have told myself do whatever it takes this season, and it paid off today. It was special to have my brother Charles in the corner to share this moment.”

Charles Sovel was an MHSAA Finals placer as a senior in 2012.

Strength was on display when these two took to the mat and as they battled the full six minutes.

“It is an awesome feeling to accomplish our team goals and my personal goals in the same year,” said Ready, whose team won the Division 1 title last weekend in Battle Creek.

“Our coaching staff has been excellent this year. We have young coaches in (wrestling) with the team, and that is the reason we were able to accomplish our goals this year.”

It was the battle of the unbeatens at heavyweight. And they are both juniors.

Perry edged Wahab by a mere point in a battle of wrestlers who had a combined 119-0 record coming into the final match.

“This is an amazing feeling,” Perry said. “I have been working for this for years and I finally did it. I went out with the mindset to be physical, and I knew I was going to win.”

He wasn’t the only Perry to place this weekend; senior brother Jacob finished fifth at 189.

“It is great to have my brother wrestle with me,” Dan Perry said. “I have someone there that can push me day in and day out mentally and physically to make me a better person and wrestler.”

PHOTO: Davison's Lincoln Olson is awarded his final high school win Saturday, and with it a fourth MHSAA title. (Click to see more at HighSchoolSportsScene.com.)