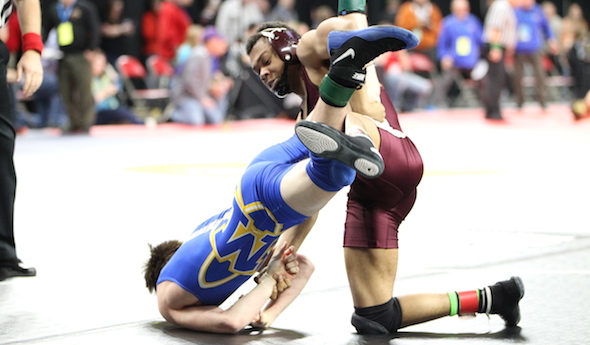 By Nick Hankins
Special for Second Half

AUBURN HILLS – Kam Bush gave the Grandville High School wrestling program and his community something to cheer about Saturday at a time when cheers were fewer than usual at the end of a wrestling season.

Because of an unfortunate oversight, the Grandville wrestling team, and most of the individuals on the team, were unable to wrestle in the MHSAA Tournament because the team had too many competition dates during the regular season.

Bush, along with three teammates, were able to compete in the postseason because they missed some of the earlier events with injuries or illnesses. Bush made the most of the opportunity, winning a Division 1 title at The Palace of Auburn Hills with a 7-6 win over Ryan Morgan of Rochester at 152 pounds.

“(Grandville coach Bubba Gritter) told us four we were still eligible to wrestle, and he nailed it in our brains that he was sorry for everything that happened, it is now over and we are representing Grandville and we need to come out strong and show everyone we are the Bulldogs,” added Bush, who ended his season with a 44-2 record.

Gritter said it was a lesson learned for his program.

“We brought all 14 guys down so they could experience this tonight.” Gritter said. “This was a tough year, and it is bittersweet for me. It was a good finish to the season, the best way it could finish for our program.”

Kamali was part of a special night for the Shamrocks, as he was one of five Detroit Catholic Central champions.

The Shamrocks were 5 for 5 on the night in title-deciding matches.

“I feel amazing, amazing,” Kamali said. “I just kept pushing the pace. I lost to him at Regionals, and I knew I could beat him. It’s just awesome knowing all the hard work you put in pays off. I knew he was tired, so I pushed the pace in overtime to get the takedown.”

Mars may have been a little nervous before his championship match with Johnson, but it sure didn’t show.

“It feels really good,” Mars said. “I was a little worried at the beginning of the match, but I stayed calm and finished the match. It feels amazing finishing with a pin and hearing the crowd roar.”

Davenport proved he is one of the top freshmen in a strong freshmen class statewide this year.

He handled returning champion Facundo, 8-1, in their 119-pound match.

“I feel really ecstatic right now,” Davenport said. “All the hard work I am putting in has paid off. I want to thank my family, God, my coaches and all my siblings for supporting me all of these years. I knew that if I just kept working hard, it would pay off.”

Another Detroit Catholic Central contender, another championship. And another impressive win, as Amine beat past finalist Rivera-Garcia, 6-0.

“I feel great right now,” Amine said. “We were five for five as a team. It was a lot of motivation watching everyone win in front of me.

“I come from a great wrestling family that helps me and inspires me to be my best everyday.”

A move up in divisions didn’t affect Noah Schoenherr. He came back off his loss in the Division 2 Finals a year ago with an exciting 7-6 win over Sanders.

“This is the best feeling in the world,” Schoenherr said. “It was the last match of the year. I had to give it everything, all I had to get it done.

“My goal was to beat my brother Chris (in MHSAA titles won; Chris won last season at 145). He helps me whenever he can, mainly on my feet. I learned a lot from last year being a runner-up. I was nervous, and being there helped me with my mindset this year.”

He’s arguably the best wrestler in the state in all divisions, and Ben Freeman proved that this weekend, winning four matches on his way to his third MHSAA championship.

His last came with a pin in one minute, 18 seconds.

“That was pretty cool to finish a tournament like that,” Freeman said. “Yesterday I felt sluggish, but I felt really good in my warm up today – I was ready to go. I just need to stay focused. I set my goals high, so when I get nervous I just think of what I want to accomplish as an ultimate goal – it makes it seem really small.”

A week after helping his team win its first MHSAA championship, he won his own individual title with a 7-3 decision over rival Hrisopoulos.

“I feel amazing right now; this feels great,” Hughes said. “I knew he was not going to stop, so I knew I had to have him wrestle my pace and my way. So I slowed him down to set up shots better.”

About the team championship, he added: “We have two state championship titles in one week. I am proud of my team and how hard we worked all year. This is for all my practice partners: Sage Castillo, Noah Lopez and all of the captains, everyone who was working hard, who got me here to win this title. I am not taking any solo credit for this; it was our team.”

Atienza wasted little time in realizing his dream of an MHSAA championship.

He pinned Caldwell in 42 seconds, and just as quickly, jumped to his feet and acknowledged the roaring crowd.

“I feel amazing right now,” Atienza said. “I feel like I am on top of the world right now. I was feeling really confident in myself going out there, and I knew there was nothing he could do to stop me – it was mine this year.”

Last year he won an MHSAA title in overtime, and this year he did the same.

“It was almost the exact same as last year,” Montrie said. “I finished them both in overtime. (Coach Kevin Vogel) pushes us so hard in the room. I honestly think we are in better condition than anyone in the state. I can go forever, and he has prepared me for that.”

Morland wanted to avenge his only loss of the year, and went against his rival to do it.

“I purposely went 171 this year (for the postseason) because this was my only loss of the year,“ Morland said. “I came back and beat the kid I lost to; that was all I wanted. I could have gone 189, but that was all I wanted. I prepared for this match, and my coaches got me ready to win. I learned from the loss that I needed to be in better condition, and my coaches prepared me for that. It means everything to join the list of state champs at Catholic Central.”

On a tough night for Davison finalists, McRill brought home a title for the Cardinals with a hard-fought 7-6 overtime win.

McRill was one of three Davison finalists, but the only one to earn a championship.

“I knew this was going to be a fight,” McRill said. “I studied his state finals match from last year. I wanted this match. It was a good feeling. I got a stall called on me to go into overtime, and it was my fault. I have to get on the attack more to get it done. It feels great to be a state champ for Davison. I feel we have the best wrestling program in the nation. Our coaches are the best around, and it is an honor to wrestle for them.”

“This feels pretty good; it feels just like last year,” Ready said. ”It was a lot of fun. I did not expect to pin him that quick. My gameplan was to finish the match as quick as I could, and I executed it tonight. I trained all summer to get back to the top of the podium this year.”

In one of the biggest upsets of the night, Jenkins beat undefeated and returning runner-up Wahab.

“It was crazy as time expired,” Jenkins said. “I feel amazing right now. I am on top of the world. A lot of preparation and a lot of hard work over the past year have led me to this point. Our coaches have prepared me to get to this point in my career, and we had a game plan going into this match, and I was able execute.”

PHOTO: Grandville's Kam Bush wrestles an opponent from Midland in his first-round match Thursday; on Saturday, he won the Division 1 title at 152 pounds. (Click to see more at HighSchoolSportsScene.com.)