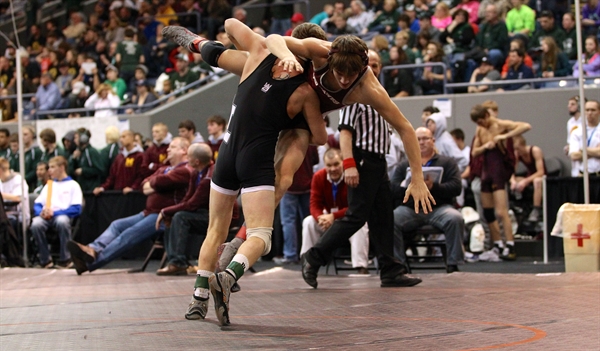 The MHSAA Team Wrestling Finals came to an end Saturday evening with familiar champions in Lowell, Richmond and New Lothrop and a first-time winner in Brighton.

See below for highlights from all four championship matches – including one from all eight teams that competed – plus links to watch the matches in full on-demand on MHSAA.tv.

Laforge at the Fore: Hartland jumped out to a 22-12 lead after eight weight classes in the Division 1 Final against league rival Brighton. Hartland's Lucas Laforge wins his 160-pound bout with Tanner Maschke, 4-3, in the final period.

Title Takedown: It came down to the final match at 112 pounds to decide the Division 1 title, and Brighton's Lee Grabowski claimed a 4-2 win over Hartland's Garnet Potter. Here's the second period takedown that gave Grabowski a 3-0 lead. Brighton won the crown, 31-25.

Dean Scores The Fall: Lowell scored the first 15 points of the Division 2 title tilt with Eaton Rapids and never looked back. Zeth Dean got a first-period pin against Eaton Rapids' Eric Anderson at 130 pounds in that streak.

Schultz In An OT Thriller: Tristen Schultz of Eaton Rapids and Logan Blough of Lowell took the 189-pound match in the Division 2 Final to its ultimate length, before Schultz prevailed, 9-8. It cut the Lowell lead to 24-16, but the Red Arrows pulled away for a 40-16 championship victory.

Drew Starts It For Dundee: Dundee jumped out to a 16-6 lead on Richmond in the Division 3 title match, with Drew Scholl starting things off with a 7-4 win over Cody Keller at 119.

Richmond Wins! Richmond Wins!: Richmond got two straight pins to come from behind and defeat Dundee, 27-25, for the Division 3 title. Connor Behem gets the fall at 112 pounds over Harry Wallace.

Copes Pins Welch: Trevor Copes of New Lothrop comes up with a key pin of Nick Welch of Hudson at 145 pounds in the Division 4 championship match.

Roberts Rules: Hudson gets off to a good start against New Lothrop in the Division 4 Final, as Tyler Roberts pinned Austin Birchmeier in 25 seconds. New Lothrop came back to win the title, 38-24.