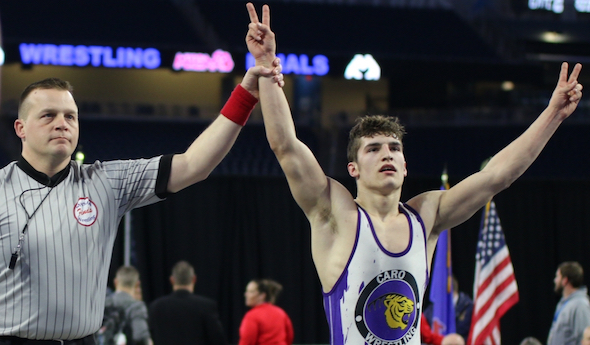 DETROIT – DJ Daniels didn’t have many close calls this season, but the Caro senior 160-pounder had a couple on his way to a second straight Division 3 championship – one on the mat, and one off.

To qualify for that final, Daniels not only had to win three matches Friday, he also had to take an impromptu 2-mile run through downtown Detroit to make it just in time for his semifinal match.

“My coach and I got stuck in the People Mover and they finally got it turned back on, but they shut it down when we got to the next stop, and we were about 2.1 miles away,” Daniels said. “So we just started jogging, hoping we’d get here in time. I was in the hole when we arrived, then I put my shoes on and got down here and I was on deck. My quads hurt a little bit, but other than that I was ready to go.”

Daniels won that semifinal match 7-1 against Trenton Blanchard of Whitehall. One day later, a more well-rested Daniels took the mat and completed his 56-0 season.

“It’s amazing,” Daniels said. “If this is the end of my career, it’s definitely how I wanted it to be.”

He had to hold off a valiant effort by Konynenbelt (48-1), who nearly turned Daniels to take a lead in the second period and came close to tying the match with a takedown in the final seconds on the edge of the mat. Daniels held him off, however, to get the win.

“I knew the situation, I knew we were right on the line,” Daniels said. “He had my leg, and I knew if I could just get his feet out of bounds, we would go back to neutral, and I’d be all right. That’s all I told myself.”

Nykoriak became the first Finals champion for Algonac since 1999, getting a third-period takedown and holding on for the win.

“I knew he scored first points, and heavyweight matches go into triple overtime, so he would have had first choice,” Nykoriak said. “I knew I had to get a takedown for it to work.

Swiderski, ranked No. 9 in the country at 106 pounds according to FloWrestling, finished off a dominant season with a dominant performance in his first Finals.

The freshman won three of his matches by technical fall, including the final against Keller, who he had defeated a week earlier to help Dundee claim a second straight Division 3 team title.

“I felt good,” Swiderski said. “I had kind of a tough weight cut, but I got energy in me and I scored points; that’s what I wanted to do. It’s just more matches. It’s fun.”

Assenmacher won his second straight Division 3 title after winning a year ago at 103 pounds.

It was Rodriguez, however, who drew first blood, getting a first-period takedown and taking a 2-0 lead. Assenmacher regrouped, though, and scored the match’s final six points to come away with the victory.

“It felt good to get back out there again in the finals; it was a good atmosphere,” Assenmacher said. “This time I definitely felt more prepared and more calm. I kind of felt like I belonged there, so it kind of helped me to stay relaxed when I was wrestling.”

Elasivich battled through a tough bracket, which saw the No. 1 seed and a returning champion fall before the semifinals.

The Montrose sophomore controlled his match against Connelly, winning the battles on his feet and allowing just four escape points against him. It was just 6-4 late, however, before he earned another takedown to seal the win.

“I felt confident because I’m always on my attacks, always getting a takedown,” Elasivich said. “I felt confident I could pull one more out for the win. I just wanted to keep doing the same things I had been doing – keep my energy high and my pace high, just work the kids and in the end get the win.”

Gamet finished a perfect senior season with the win against Breece, but he was disappointed an incredible run of not allowing an offensive point all season did come to an end.

“I’m not happy about being reversed or being scored on offensively,” Gamet said. “But once we got on our feet and I got that takedown, I knew there was nothing he could do – nobody can take me down. I felt like I was in a good spot.”

Gamet is now a three-time Finals champion, having won Division 2 titles in 2016 and 2017 while at Parma Western.

After Gamet walked off the mat victorious, Michigan Center made it two in a row, as Rankin claimed his first Finals title.

“That’s the best feeling in the world – it means that much more,” Rankin said. “Having your best friend out there before you, then you win it right after. We even hit the same celebration.”

Rankin said Mahaney did a good job of countering his go-to moves, something he had to react to in the moment.

“I felt pretty good – you could definitely tell they prepared for me a little bit more,” Rankin said. “I try to be as versatile as I can, but there are some things that you just do that people figure out. I think they definitely figured some of my stuff out and prepared for it a little bit better.”

White and Swiderski have seen a lot of each other in the Dundee wrestling room over the past two years, and it showed on the mat as the only point scored was a White escape.

“Throughout the year we were battling at tournaments,” White said. “I had a hunch at the beginning of this tournament that I would wrestle him in the finals. It was awkward, but I just tried to stay calm and do what I had to do to win.”

The victory capped off a great postseason for White, who also clinched Dundee’s team championship victory against Richmond the week prior.

“It’s not a bad two weekends,” he said. “To be back-to-back team state champs then finally come home with my individual, it means the world. I’ve worked so hard to become a state champ, and my dream came true.”

With the chance to choose bottom in the ultimate tiebreaker, Bastian felt confident. But before he could get there, he saw an opening.

Bastian caught Killion on a shot and took him to his back, breaking a 2-all tie and claiming his first Finals championship.

“Ultimate overtime, I felt I would have had that as well, but the (back points) just helped and it worked out really well,” Bastian said. “I played through the whole campaign, and I feel like I did well against the final boss.”

With a pair of runner-up finishes already under his belt (2016 and 2018), Robinson was determined to finish his career on top of the podium.

He was in control of his finals match, and put it to rest in the third period with a pin. It was the most dominant performance of the weekend for the top-seeded wrestler.

“Honestly, I didn’t have any pressure, I just felt I was better than everyone and I had enough tools to win it all,” Robinson said. “It feels amazing. It’s crazy. I was just a little freshman a few years ago, and it just flies by. It feels amazing – the best feeling ever.”

The only point scored was an escape, and Buell, who won at 135 a year ago, had been expecting that it wouldn’t be easy.

“He’s a three-time finalist, so I knew he was really good, really strong,” Buell said. “I really like my single, and I knew he wasn’t going to let me get that, so I really had to get two hands to it. I couldn’t finish one, and I had that stalling call, so I just had to keep going and going and going.”

Guilford had a dominant weekend, racking up two falls and two major decisions. He capped it off with an early-second period pin to claim his second straight title and finish a perfect season.

A year ago, he became Portland’s first champion since 2000, and now he is the school’s first two-time champion.

“It feels pretty good,” Guilford said. “I wouldn’t have been able to do it without my coaches, the support staff, my family and friends. And a big shoutout to Kyle Hines for, ever since second grade, being my practice partner all the way through. I can’t take any of this credit.”

After taking fourth in his region, Taylor wasn’t on many people’s radar heading into this weekend. But he pulled off more than one upset to defy the odds and claim the title.

With his victory, Taylor became Foley’s third Finals champion and first since 1971.

“It feels absolutely amazing,” Taylor said. “I can’t believe it. Coming in as a freshman trying to wrestle, then coming in as a senior and winning a state title, it’s like night and day. It’s amazing. I love it.”

In a Regional Final rematch, it was once again Cook coming out on top.

A single escape was the difference in the match late into the third period, but Cook was able to get a takedown and seal the win.

PHOTO: Caro’s DJ Daniels has his arm raised in victory after finishing an undefeated season with a Division 3 title. (Click for more from HighSchoolSportsScene.com.)